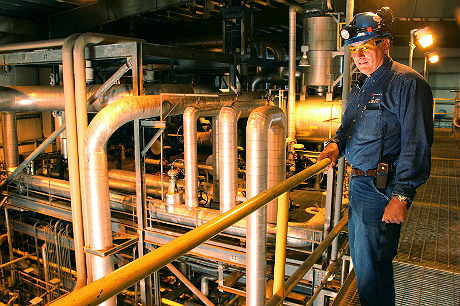 PORTAGE, Indiana — “Feel this pipe,” says Bill Satek, laying a hand on a thick curved pipe inside Portside Energy’s plant on the grounds of the U.S. Steel Midwest mill on the shore of Lake Michigan. The metal is cool. A few feet away is a pipe that looks identical but is almost painfully hot to the touch.

“That’s the beauty of Portside,” says Satek. “That’s what makes this project awesome.”

The difference in temperature represents a significant savings in natural gas used to power the steel mill’s operations, cutting costs for U.S. Steel and reducing greenhouse gas emissions. It is part of a larger combined heat and power (CHP) operation that Portside Energy runs on contract for U.S. Steel, harnessing waste heat and using top-notch efficiency measures to provide electricity, steam and hot water for the mill.

The cool pipe holds water from Lake Michigan, which glimmers blue just a stone’s throw from the Portside power plant. The lake water on this June day is about 72 degrees, after going through a treatment process to remove silt and minerals that warms it a bit. In the dead of winter, the water would be closer to 40 degrees. But Portside provides the steel mill with up to 2,000 gallons a minute of water at about 180 degrees Fahrenheit – that’s the water in the second pipe Satek pointed out.

Before the CHP installation, U.S. Steel would use natural gas boilers to heat all that water. Today, the water is heated by capturing waste heat from the power plant, heat that otherwise would have dissipated into the air as steam or exhaust.

Satek has a long career in combined heat and power, also known as cogeneration. He’s set up small cogeneration plants at a northern Illinois bakery and a Colorado gypsum drywall plant, among other things. But he says the Portside plant at U.S. Steel is the most exciting such operation he’s seen.

Portside Energy is a subsidiary of Primary Energy, which also owns and runs a suite of combined heat and power and waste heat to power (WHP) operations at the ArcelorMittal steel mill, just west of U.S. Steel along the Lake Michigan shore. The two mills, along with U.S. Steel’s nearby Gary Works, are the vestiges of a once-legendary steel industry in the northwest Indiana and Chicago region.

The CHP projects at the ArcelorMittal plant include a system capturing waste heat and reducing sulfur dioxide and particulate emissions from the coking process. Primary Energy (through the subsidiary Ironside LLC) also captures gas from the mill’s blast furnace that otherwise would be flared, reducing pollution and fueling a 50 MW CHP plant.

At U.S. Steel’s Midwest plant, Portside Energy spent $60 million to replace the old power house with two gas-fired boilers, a combustion turbine that is capable of producing up to 44 MW, and a steam generator that can produce up to 19 MW. That system went online in 1997. In 2012, state-of-the-art equipment to capture and harness more waste heat was added at a cost of $8 million.

Now the plant provides most of the steel mill’s electricity needs and all of its steam and hot water needs – avoiding a total of 180,000 tons of carbon dioxide per year.

“With CHP you can get to 70, 80, 90 percent efficiency,” said Primary Energy President and CEO John Prunkl. (The former CEO of Primary Energy was CHP guru Tom Casten, whose son and business partner Sean Casten recently talked about the technology with Midwest Energy News.)

“We took what was already an efficient facility and made it even more efficient.”

It all starts with the plant’s highly efficient combustion turbine generator, burning natural gas to make electricity. The exhaust produced from that generator — at 1,000 degrees Fahrenheit — is used to create high-pressure steam in the Once Through Steam Generator (OTSG) which supplies steam to a topping cycle steam turbine, creating more electricity for the steel mill.

Exhaust from the OTSG stack – at 280 degrees — is pulled in to a newly installed “condensing economizer,” that uses more waste heat from the combustion turbine generator to heat water.

The steam is used to heat water from Lake Michigan, and that hot water is sent through elevated pipes to the mill for use in the steel-making process. The system then condenses the steam into purified water, which is returned to the power plant’s de-ionizing water system for reuse in the plant, conserving water that otherwise would have dissipated into the atmosphere.

The plant’s two gas auxiliary boilers used to run continuously to make steam. But thanks to the retrofit and recapture of waste heat and steam, now one of the boilers is almost always quiet and the other one typically does not run at above 10 percent capacity.

In the Portside control room, a host of wide computer screens show the real-time operating levels and efficiencies of all aspects of the CHP plant, displayed beside data on U.S. Steel’s current operations. Satek notices that the boiler is running at a relatively high nine percent. But this means a high-tech variable-speed fan will be automatically ramping up in order to circulate more exhaust heat through the condensing economizer, and to allow the boiler to dial down to about three percent capacity – saving on fuel burned.

Even during the record cold winter where average temperatures at the plant hovered around 16 degrees, only one boiler was running at about 50 percent capacity.

“We get a huge bang for the buck,” said Satek, who was also the driving force behind a cheerful “Serenity Garden” constructed behind Portside, featuring flowerpots and boxes for tomato plants and wind chimes and a picnic table made from recycled industrial materials.

“That condensing economizer has done so much for this plant. I’ve been in plants my whole life, and this is the most efficient operation I’ve seen.”

Portside Energy gets a percentage of the energy savings that U.S. Steel achieves. Prunkl noted that third-party ownership of a CHP operation means that a company like U.S. Steel can adopt CHP with little capital outlay or risk.

“If I’m the president of a large steel company, my job is to make steel, so if I have $100 to spend I want to upgrade the process line so I can make more money on a better quality product,” said Prunkl. “I’m probably not going to spend that money to build a steam or cogeneration plant.”

Meanwhile, he noted, a corporation usually seeks a much quicker return on investment than a CHP retrofit can provide.

“The ideal payback might be from the corporate perspective one or two years,” he said. “Let me tell you, never in a million years are you going to pay back a large-scale CHP or utility-type investment that quickly.”

But with Portside Energy making the investment, U.S. Steel is not waiting around to recoup its spending. The project was started in the mid-1990s, a dire time for the domestic steel industry as many mills had recently closed or drastically shrunk operations, squeezed by foreign competition and other changing market forces. Energy savings are a way steel mills can improve their bottom line to help stay competitive while also reducing their environmental impact.

When Portside generates more electricity than the mill is using, it sends some energy back to the grid — a situation Prunkl said the company tries to avoid because it loses money. States could incentivize CHP operations, he says, with policies that make it much more attractive and viable to send electricity back to the grid, like net metering which credits residents or companies for electricity they generate at market rates.

“If you could do net metering that would make that process so much better,” said Prunkl. “Steel mills’ power loads are going up and down all the time. If you could net meter to smooth that out, it would be really helpful.”

But Indiana does not have net metering or other strong policies encouraging energy efficiency or distributed generation. Utilities typically oppose incentives for combined heat and power, since such installations reduce their demand and revenue potential.

In 2012 President Obama issued an executive order promoting (though not funding) increased investment in CHP, with a goal of 40 new GW of CHP by 2020. Experts are encouraged by such efforts but note that there is still much potential for combined heat and power left untapped.

“We’re trying to get the federal and state governments to recognize that both CHP and waste heat to power can be really positive, but sometimes we need a little help,” said Prunkl, who is also chair of the Heat is Power Association.

“Why are we just helping wind and solar, when waste heat and power projects have no incremental emissions. We should be doing more to incentivize them.”