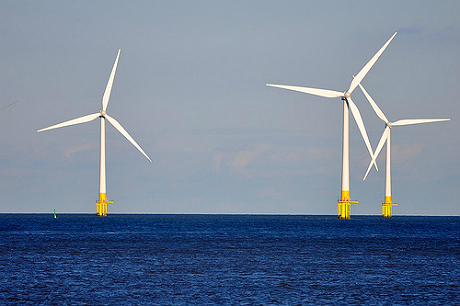 Developers of an Ohio offshore wind energy project say it will proceed despite losing out last month on one of three $47-million 4-year grants from the Department of Energy (DOE).

The money would have let Lake Erie Energy Development Corporation (LEEDCo) build its 18-MW Icebreaker pilot project and have it in operation by 2018.

Nonetheless, DOE has agreed to give LEEDCo at least $3 million to complete engineering and other studies. The funds are in addition to approximately $4 million awarded by DOE in 2012.

LEEDCo was launched five years ago by Nor Tech Energy Enterprise, the Cleveland Foundation, the City of Cleveland, and Cuyahoga and Lorain Counties. The nonprofit regional and economic development organization can still pursue other private or public funding options for its 6-turbine pilot project.

The planned Icebreaker site sits seven miles off the shore of Lake Erie near Cleveland. If successful, its innovative design could open up more of Lake Erie and the Great Lakes for offshore wind energy.

“The fundamentals of the project are as strong, if not stronger” than ever, Wagner says. “People want locally-grown green energy. They want to clean up the environment. They want jobs.”

Engineering for muck and ice

Layers of soft clay, sand, compacted clay and glacial till sit 60 feet under the project’s planned site. To get through all that and down to shale bedrock, LEEDCo will adapt the monopile design used for wind farms in the North Sea.

This diagram shows how wind turbines in Lake Erie would be anchored to the lake floor. Courtesy LEEDCo. (click to enlarge)

A monopile is basically a giant hollow steel tube — imagine twisting a huge drinking draw into wet sand to anchor it. Similarly, a monopile foundation can support a heavy wind turbine.

The Icebreaker project will get extra stability by adding a device called a friction wheel, a structure made of large metal rings surrounding the tube on the lake floor.

Ice is another huge challenge. Turbines must withstand the force of several tons ramming into them as ice moves around on Lake Erie’s surface.

Not all ice forms in smooth thin sheets, either. Thickness and form both vary.

For example, ridge ice forms “when the ice breaks and the sheets kind of climb over each other,” says Wagner. “Ridge ice is really what drives the design.”

Specially-designed ice cones at the surface of the water will break up the ice as it strikes the turbines. As that happens, sensors will also collect information.

“It’s amazing how little detailed data there is about ice,” Wagner notes, especially when it comes to information about its thickness and strength.

That data will expand scientific knowledge about physical science and the Great Lakes. Data about real world ice, loads and other stresses should also reduce engineering requirements and construction costs for future offshore wind projects on Lake Erie.

Icebreaker is just the first step towards getting those future projects up and running. LEEDCo hopes its pilot project will attract private investment and develop Ohio’s offshore wind industry.

“You look at our region, and we’re still starving for jobs,” Wagner says, while noting that no one industry can solve the problem.

Developing Ohio’s wind industry is more daunting in the wake of recent changes to Ohio’s renewable energy standards and other setbacks. Also, notes Wagner, “We’re going against established industries who continue to get significant subsidies.”

Until recently, for example, utilities have been able to pass through to ratepayers all reasonable and prudent costs for building and operating generation plants, while still earning a return on investment for shareholders. And despite deregulation, a current administrative case seeks to charge customers extra costs for older coal plants.

“We’re competing anyway,” says Wagner. But he says he’d prefer it to be done on an even playing field.

The Icebreaker project has support from various environmental groups, including the Sierra Club’s Ohio Chapter, the Ohio Environmental Council, Environment Ohio, and others.

“The Great Lakes are littered with dirty coal plants. The Great Lakes are also home to several nuclear plants that have safety violations,” notes Jen Miller, Sierra Club Ohio Chapter Director. “If we do not move to wind power and other renewable sources of energy, we have to rely more heavily on these dirty sources that are already threatening the lakes.”

This spring the American Bird Conservancy and Black Swamp Bird Observatory voiced concerns to the Ohio Power Siting Board. The groups’ earlier efforts halted a wind turbine at Camp Perry, Ohio, because of its location near migratory bird pathways. Now they want closer scrutiny of Icebreaker.

“We didn’t exactly oppose it,” says Michael Hutchins, National Coordinator of the American Bird Conservancy’s Bird Smart Wind Energy Campaign. “What we did was call for all of the voluntary legal guidelines regarding the protection of birds to be done.”

Among other things, Hutchins wants additional studies beyond the avian risk assessment prepared for LEEDCo last fall by Curry & Kerlinger, an environmental consulting firm based in New Jersey.

Risks to birds are “negligible,” the study says.

Most notably, the Icebreaker turbines will be seven miles from shore. Because very few birds fly directly across Lake Erie there, the study estimates collision risks for Kirtland’s Warbler at about 1 death every 500 years. Risks to the Piping Plover would be five times lower, it says.

LEEDCo consulted extensively with fish and wildlife experts at the Ohio Department of Natural Resources, says Wagner. “We have done everything they asked us to do.”

Other types of electricity generation affect birds too, notes Miller. “If the fish are full of mercury because of coal power plants, the birds are going to eat those fish,” Miller says.

Nor are birds the only species that matter. “We need to look at the entire ecosystem and all the various species that are affected,” Miller says.