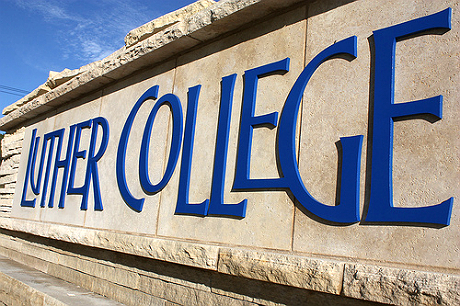 Luther College in Iowa wants to invest in combined heat and power, but says it's utility's policies make it cost-prohibitive. (Photo by Justin Berndt via Creative Commons)

An Iowa college that wants to cut its energy consumption says its utility’s rate policies are holding it back.

“We are interested in combined heat and power to save money, and because we want to reduce our carbon footprint,” said Jim Martin-Schramm, a religion professor at Luther College in Decorah, Iowa, who also serves as the college’s interim director of the Center for Sustainable Communities. “Right now it’s not a real option.”

The college has looked at the feasibility of a 1.4 MW gas turbine that would generate more than half of the electricity used on the campus each year. It’s projected that the system could also heat the campus through combined heat and power, also known as cogeneration. Martin-Schramm said the system most likely would use either natural gas or gas produced at a nearby landfill.

However, according to the college administration’s math, the fee that their local electricity provider, Alliant Energy, would charge them for sporadic use of grid power — also known as the “standby rate” — is simply too high for the project to be viable.

The college hired the Energy Resources Center, based at the University of Illinois in Chicago, to do a feasibility study. The center estimated the payback time at 55 years. If the college were served by MidAmerican Energy rather than Alliant Energy, the researchers found, the system would pay for itself in about 15 years.

“The standby rate is a key piece of this,” said Martin-Schramm.

Utilities typically charge standby rates to customers with on-site distributed generation, such as a combined heat and power system, to cover the costs to the utility both of providing actual power, and of maintaining the capacity to provide that power, should the customer’s own generation system fail or have to be shut down for maintenance.

The Energy Resources Center earlier this year evaluated the standby rates at Alliant Energy, one of Iowa’s major investor-owned utilities.

Standby rates can be designed in such a way that they pay off for utilities, but bear little resemblance to the actual burden that CHP systems impose, according to Jennifer Kefer, the program manager for the Alliance for Industrial Efficiency, which represents skilled trades that would build and install CHP systems.

Some utilities charge CHP customers a monthly fee in order to maintain access to the grid. The monthly fee is in some cases based on the largest amount of power drawn from the utility during a single 15-minute period in the previous year – like the hottest few minutes of the hottest summer afternoon. That ends up being a very high rate because power rates typically are highest during times of peak demand. Some utilities then charge that access fee every month for up to a year, when it would be reset.

“They’re assuming you’ll need power at a peak time. That’s an expensive time,” Kefer said. “They (CHP systems) are very unlikely to go down during a peak time. The rate is not based on how often you go down. It’s not a reflection of the real burden we’re placing on the grid.”

“Paying this penalty for the one time in the year when you had to use the grid can negate the whole benefit of installing CHP,” Kefer said. And while she conceded that utilities must invest in equipment to maintain the ability to produce power when it’s needed, Kefer said she suspects that “the motivation for high standby rates often is to discourage CHP. Utilities often have concerns that CHP undermines their business model.”

Utilities whose earnings continue to be based on the amount of power they sell almost certainly will lose revenues whenever their customers try to use energy more efficiently, or seek power from sources other than their local utility, such as rooftop solar panels.

In fact, combined heat and power is notable for its reliability. The Oak Ridge National Laboratory surveyed distributed-generation systems and found that reciprocating engines of up to 3 megawatts and gas turbines of up to 20 megawatts are, on average, available 95 percent of the time.

“Harsh standby rates penalize DG (distributed generation) systems for the 5 percent (or less) a system is inoperable while failing to reward the other 95 percent of the time. When multiple DG systems operate on the same distribution circuit the average availability increases,” Miller and Haefke wrote in their testimony to Iowa’s utility regulator. Miller is a research policy analyst and Haefke a principle engineer and manager of the distributed generation program at the University of Illinois Energy Resources Center.

The two were hired by the Iowa Environmental Council, the Environmental Law and Policy Center and the Iowa Policy Project to evaluate CHP policy in the state. And while they characterized Alliant’s CHP rates as especially punitive, in much of the country the potential of producing heat and power together has not been fully realized.

In its 2013 State Energy Efficiency Scorecard, the American Council for an Energy-Efficient Economy rated the states on their energy policies, with an emphasis on friendliness to efficiency and renewable energy sources.

Policies pertaining to CHP could earn a top score of 5 points in the evaluation. In the Midwest, only one state scored higher than a 2. That was Ohio, which earned a 3.5. Nebraska, by contrast, scored a zero, and Missouri a meager .5 out of 5.

States can encourage development of CHP by treating it as a renewable or efficiency resource, just like solar panels or LED light bulb, the report said. And while some states do, at least officially, classify CHP as an efficiency or renewable resource, they don’t treat it as an equal, according to ACEEE. To do so, states must develop a specific method for computing the energy saved by combined heat and power.

State policy and utility profit considerations can, and do, pose significant hurdles in the development of combined heat and power. In addition, market forces can get in the way of this technology. Combined heat and power thrives best in an environment of a high electricity price and a low price on energy, such as natural gas or coal.

In at least some parts of the Midwest, electricity is still cheap enough that burning a fossil fuel to produce heat or steam, with a side order of power, is still a hard sell.

The Iowa Environmental Council, the Environmental Law and Policy Center and the Iowa Policy Project are all members of RE-AMP, which publishes Midwest Energy News.