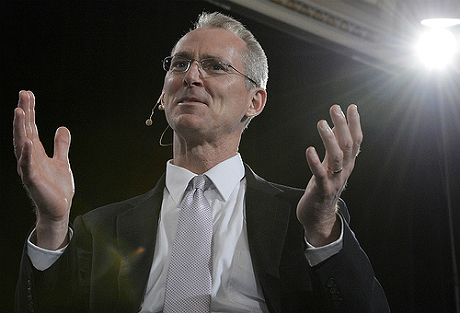 As Congress was considering the Waxman-Markey bill that would have instituted a cap-and-trade program to reduce carbon emissions, Inglis proposed an alternate approach – a “revenue-neutral” tax on carbon that would be paired with cuts in other taxes.

His acknowledgement of climate change and other moderate positions alienated him from Tea Party-aligned factions, and he lost in the 2010 Republican primary. In 2011 he spent a semester as a Resident Fellow at the Institute of Politics at Harvard University, and launched the Energy & Enterprise Initiative (E&EI), a non-profit organization based at George Mason University aimed at promoting his carbon plan.

Midwest Energy News: What is your mission at the Energy & Enterprise Initiative —  do you have a greater chance of implementing your program this way than in Congress?

Inglis: We’re about preparing the country for a free enterprise solution on climate change.

Our first task is to show the champions of free enterprise and fellow conservatives the strength of their own ideas, that there really is a free enterprise answer here. It’s a true cost comparison between the competing fuels that will drive innovation faster than government regulations or clumsy mandates and fickle tax incentives.

What we’re proposing is an income tax cutting, EPA-shrinking, China-in carbon tax. Then we can actually repeal some Clean Air Act regulations – not the entire Act, but there are some portions that would become redundant because of the pricing of carbon dioxide.

How do you really quantify the true costs of different energy sources and insert those costs into the market? How would you make sure the costs are passed on to the right parties?

The role for the government is being the honest cop on the beat, that brings accountability to all the fuels, that figures out an effective way to say all fuels have to be fully accountable for all of their negative externalities, all of their hidden costs. We think that’s best done by a 100 percent returnable emissions tax, so it is revenue-neutral.

That’s so very important because we’ve got to figure out a way to make it in our trading partners’ interest to join us in a similar pricing of carbon dioxide. Absent that, we really could end up being the double losers — the country that prices carbon dioxide internally, causing a loss of employment, as companies pick up and move to locales that will let them emit for free; and then in moving to those countries, they actually increase emissions. So a), we lose jobs and b), we lose the race to reduce emissions.

If you’re depending on this being an international system, isn’t there a big danger that it will take a very long time to happen, if ever, and meanwhile emissions keep increasing?

We definitely don’t want to wait – we just want to make this bold commercial move that other countries then follow. We would assume it would be challenged in the World Trade Organization, but we think there are good arguments based on precedents regarding the chemical industry and the ability to impose taxes on imports based on the content of chemicals.

Based on that precedent, we think there’s a good shot the WTO would uphold the border-adjustable tax. If they did, we maintain that China within about 24 hours – they do have an amazing way of reaching consensus – would impose the same price on carbon dioxide because it would become in their interest to do so.

If you’re a state-run industry in China and you’re importing plastic to make Barbie dolls that end up on Wal-Mart shelves and you’re paying the tax based on the carbon content of that plastic on entry to the United States, it means you’re remitting money to Washington that could have been remitted to Beijing. So why not impose a similar price on carbon dioxide in China, and then keep your tax revenue at home, and enter with your plastic without an adjustment. If they’ve got the same price on carbon dioxide, there wouldn’t be any border adjustment.

Is it realistic to believe China would ever adopt such a system?

We have reason to believe that China has felt a need to act. Even if your main goal is stability and you feel you must have economic growth to support that stability, still you have a child who wants to go out and play soccer in Beijing and they can’t because the air is so bad. They need to protect their advantage in mass manufacturing, but we think they would preserve their comparative advantage (even with a carbon tax), because the whole world would be moving to (quantifying) the true cost of energy output.

What we’re talking about is not an international agreement where we have to send John Kerry to bow and scrape and beg for an international agreement that would take forever. Rather it’s a bold commercial move that wins in the WTO. If those two conditionals hold up, we think it becomes in India’s and China’s interest to follow us, and then the whole world follows suit.

You’re talking about passing on the price of carbon emissions, but when you talk about the “true costs,” shouldn’t that also include the health costs that are created by things other than carbon – like sulfur dioxide, particulate, mercury?

Carbon dioxide pricing becomes a proxy for particulates. The argument that we have to make is that there are health costs that are real and immediately quantifiable, that aren’t discounted over long periods of time. We can know them with some degree of certainty, whereas admittedly climate costs are a little harder to quantify because of the time horizon. So let’s go ahead and attach the health costs for sure and then come back and talk to you about the climate costs.

As a theoretical matter, doesn’t it fit with our Republican conservative view of the world that all actors in free enterprise should be fully accountable for all their costs? That we shouldn’t allow people to socialize soot? If you allow people to socialize soot, it allows the incumbent socializer of the soot to get away with it while there’s some innovator ready to challenge that system but they can’t win. (This argument is) something that resonates deep within the soul of fellow conservatives. It fits even with Tea Party ethos.

But can you really quantify the health costs of things like particulate and mercury and add that into market prices? Those emissions have long-term and geographically disbursed health costs too.

How do you get through the climate change denial? Do you think many Republicans truly do doubt the science of climate change, or is it a political posture?

A big part of (Republicans’ stance) is that the assumed solution is a bigger government that taxes more, that regulates more, that grows the nanny state and impairs liberty. That assumed solution is anathema, therefore it’s only natural that we conservatives go back to disputing whether we have a problem or not. Because the solution that is so often talked about is such a bad solution, that violates all of our deeply held beliefs.

What we have to show is that there is a solution that is completely consistent with our deeply held beliefs and actually involves a smaller government and an effective pricing of this negative externality rather than proscriptive regulations, fickle tax incentives or clumsy government mandates. It’s better to follow what we know works, which is a free enterprise answer where all the costs are in.

This causes some of the renewable fuels industry people to gasp for air – we would eliminate the Production Tax Credit, the $7,500 credit for electric cars, we would have no more Solyndras. But we would eliminate all the subsidies and attach all the costs. Then the renewable industry starts breathing again – like “We can live with that for sure, if you’re really going to do that to coal and natural gas and oil, then solar lives and wind lives.”

It’s consistent with what conservatives believe because we don’t want the government putting the thumb on the scales to favor one or another.

When you talk about liberty and freedom, what about the fact that landowners and homeowners see their quality of life and property values affected by hydraulic fracturing or coal mining near their land? It doesn’t sound like your solution would address those concerns.

As a Republican not a libertarian, I feel comfortable with land use regulation. I understand I have some libertarian friends that don’t like that, but that’s an argument we Republicans can win.

Would you see the Clean Air Act still covering particulate, mercury and other air emissions that impact health and quality of life?

As a Republican not a libertarian, I’m comfortable with the Clean Air Act and Clean Water Act regulations but I’m certainly excited about the possibility of them being repealed because they’ve become redundant. But if they don’t become redundant, it seems reasonable to me that society comes along and says, “We’re going to limit the amount of that stuff you’re pumping into the air.” But some of those things may be reduced if you’re going to charge me a tipping fee for dumping carbon dioxide into that sky dump. That’s probably going to change other (emissions) as well.

Do you think your approach is a good fit with the larger efforts to rebrand the Republican party and make it more appealing to young people and women; to offset the negative publicity caused by the Tea Party?

We’re a 501(c)3 organization so we don’t get involved in party politics. But I’m a Republican and I want the Republican Party to succeed because we think our ideas are better than the other party’s ideas.

The risk my party is running right now is if the country decides it wants to act on climate change, the only idea out there right now is one from President Obama that talks about regulating through the Clean Air Act. That’s the only contestant on the field. We might think we can take the game ball and run it up into the stands and sit on it – but they’ll come get that ball eventually. We need to get down on the field and compete.

To say, “We see your idea, but we’ve got a better idea and it’s going to work. It’s going to create wealth, more mobility, more energy, more freedom.” We’ve got to sell that. It’s an exciting time for Republicans and conservatives because the country’s waiting to hear from us, and we can come forward with something that really works.