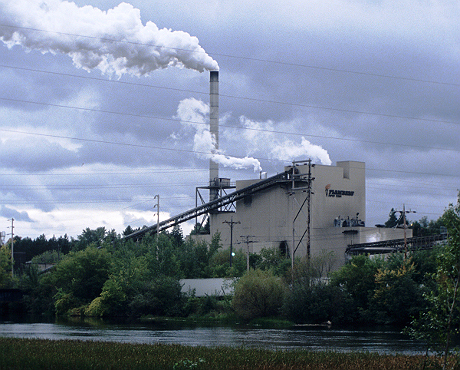 The hulking pulp and paper mills built many decades ago in Wisconsin, Michigan and other Midwestern states have had their share of environmental impacts.

But the mills were decades ahead of the game in adopting technology now seen as an effective tool to fight greenhouse gas emissions and environmental impacts. That would be the use of combined heat and power (CHP, also known as cogeneration), promoted by President Obama with a 2012 executive order and lauded by environmental and energy efficiency advocates.

Like any industry that generates electricity onsite, paper and pulp mills can take the heat from their generators to create steam that can be used to generate more electricity. More importantly, the heat can also be used directly for mills’ industrial processes, including for drying pulp.

“We were doing this before people were using the term ‘sustainability,’” said Jerry Schwartz, senior director of energy and environmental policy for the American Forest & Paper Association, a trade group. “A lot of it made economic sense.”

Nearly all of the electricity generated at paper and pulp mills nationwide involves CHP, along with about two-thirds of the electricity they consume, according to sources at the American Forest & Paper Association and the Department of Energy. The paper and pulp sector ranks second of all industries in its current use of CHP, according to a 2012 paper by the trade group.

A 2013 study by the World Resources Institute noted that Midwest paper and pulp mills have 1.3 GW of installed CHP capacity, and nationally there is about 7.2 GW of CHP in pulp and paper mills. Wisconsin mills have by far the most CHP, followed by Michigan and Minnesota mills.

“The paper industry has long recognized the value in creating electrical energy while making low pressure steam for cooking pulp and drying paper,” said Richard Petersen, Superintendent of Technical Services and Reliability for Expera Specialty Solutions, which runs two mills with CHP in Wisconsin. “We consider CHP to be a key part of our energy strategy and our sustainability commitment.”

The U.S. paper industry has been going through some rough times, partly because the digital revolution has cut down domestic demand for paper.

In 2006 the mill now known as Flambeau River Papers closed its doors and laid off more than 300 people, a devastating blow for the small northern Wisconsin town of Park Falls. Ultimately the timber company that had been supplying the mill – then called Smart Papers – bought the operation and reopened it, with big investments that included environmental upgrades.

Flambeau River processes wood harvested with certified sustainable forestry practices, and, unlike some mills, the operation is chlorine-free. It also prides itself on efficient energy use. The mill has continued to face financial challenges; for Flambeau and other mills in similar situations, efficient energy generation and use is crucial to trying to stay competitive.

Flambeau burns coal, biomass and high-energy wood pellets to generate electricity. Then it turns the waste heat from that process into high-pressure steam that is used to produce an additional 5.5 MW of electricity, meeting 27 percent of the plant’s power needs.

After being used for generation, the now-low-pressure steam is used to make paper. The CHP system supplies 70 percent of the plant’s steam needs, according to Flambeau spokesman Randy Stoeckel. Flambeau’s website says the plant has reduced energy demand even as production has increased, meaning significant cost savings.

“In essence we produce 5.5 megawatts that we otherwise would buy from the grid at twice the cost,” said Stoeckel.

The company New Page owns eight paper and pulp mills in six states including Wisconsin and Minnesota, and seven of them use CHP, according to energy director Thomas Scharff.

“You need steam to make the pulp and later on to dry the paper on the paper machine,” Scharff said. He explained that the steam can be produced at a wide range of pressure levels needed for different operations. Typically high pressure steam is run through a turbine to generate electricity, then the lower-pressure steam that results is used for the paper-making process.

“This allows the mill to have their self-generation of electricity – it’s less they have to buy from the incumbent utility at a higher price,” he said.

While almost any industrial operation can use its waste heat to generate electricity, paper mills with pulping operations have an additional way to increase their efficiency. They produce a byproduct known as “black liquor,” that can be burned to create more power and heat rather than being combusted without capturing the energy value.

A 2004 report by the Department of Energy on fuel sources for CHP operations noted that black liquor is a staple for the paper industry that could theoretically also be sold to other industrial operations with CHP.

“It’s a very good thing for their bottom line, and also much better for the environment,” said United Steelworkers public policy spokesman Keith Romig. “The economics do make those mills more secure and more viable.”

In 2012 the EPA finalized new rules for boilers at industries like paper and pulp mills. The Boiler MACT (maximum achievable control technology) imposes emissions limits on many coal, oil and biomass boilers. CHP could help mills and other industries meet the new limits, and the Department of Energy offers technical assistance for replacing old boilers with CHP systems.

However Stoeckel said the rules will make things difficult for Flambeau. He said that Flambeau’s operations could comply with Boiler MACT if they switched to natural gas rather than coal and biomass to fuel their boilers, but that could be prohibitively costly.

“Under Boiler MACT Flambeau will need to reduce particulate emissions by 38 tons per year at an estimated cost of $5 million in capital and another $1.2 million per year in operational cost,” Stoeckel said. “If we were to switch the boiler over to natural gas we could continue the CHP but it would cost more than biomass and would not be sustainable.

“The other unknown with natural gas is the volatility of pricing and the infrastructure of the natural gas pipelines. As more and more industry switches away from biomass to natural gas the demand may very well exceed the pipe line capabilities like we experienced in January and February of this year.”

Stoeckel said the Flambeau mill does not sell any power back to the grid. Most mills produce less power than they consume, though they still might send energy to the grid at times they are generating more than they can use at that moment. This means that paper and pulp mills with CHP face the same challenges as entities installing solar, small wind turbines and other types of distributed generation.

The Public Utility Regulatory Policy Act (PURPA) of 1978 was meant to facilitate distributed generation and renewable energy in part by mandating that utilities buy such energy.

But the way the law has been interpreted has meant that large CHP operations generating power onsite can be treated essentially as power plants on the grid, in many cases subject to the authority of the Regional Transmission Organization (RTO) that oversees that region’s grid.

In an article in the Journal of Sustainable Forestry, Irene Kowalczyk notes that this means transmission organizations could theoretically order a mill with CHP to send a certain possibly large amount of its power to the grid at any given time, theoretically starving them of their own power.

And even as many mills provide a prime example of increased efficiency through CHP, some will also be affected by the EPA’s recently announced proposed rules limiting carbon emissions from existing power plants. Mills that have coal-fired power onsite could be forced to make significant overhauls if the rules are finalized.

“For some plants, the capital requirements (of the EPA rule) will deplete multiple years of discretionary capital and include a continued operating cost that often equates to 5 to 10 percent of payroll,” said Expera spokesperson Addie Teeters. “Employees of the paper industry aim to have clean water, land and air surrounding our facilities. However, this needs to be achieved in a fair and equitable manner without attacking our family-supporting jobs.”

The retirement of coal plants could actually provide further opportunities for CHP at paper and pulp mills however, Scharff and Petersen noted. They envision utilities launching new power plants, potentially biomass or gas plants, located next to mills that could turn the resulting heat into thermal and extra electric power.

“At the same time demand for electricity has been increasing, utilities are having to replace boilers,” said Scharff. “Moving ahead, is there an opportunity for pulp and paper to combine with utilities and we would buy the steam from them? You could have one site where they can generate electricity and sell us some of their steam. That’s good environmentally.”

Expera environmental manager Mark Nessmann added that states can encourage CHP at industries like paper mills by allowing them to sell renewable energy credits based on their CHP generation to help utilities meet Renewable Portfolio Standards. States could also decide that thermal energy from CHP could be allowed to meet the standards, which typically only apply to electricity generation.

“There are many different ways this could be set up,” said Nessmann. “The point is to recognize the value (of CHP) and allow a facility to sell that value which incentivizes them to put in the investment.”