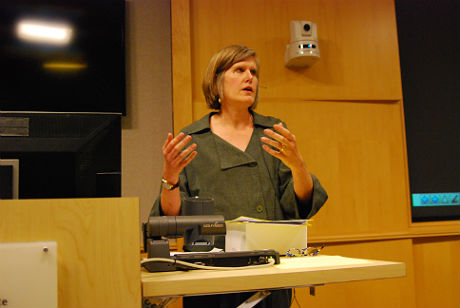 High-profile environmental activist, biologist and writer Sandra Steingraber – whom Rolling Stone dubbed the “Toxic Avenger” – gained her love of science and ecology in the Midwest, growing up in central Illinois and studying English and biology in Illinois before earning a biology doctorate at the University of Michigan.

Rachel Carson’s Silent Spring motivated Steingraber to “leave the lab,” as she says, and become an environmental activist and watchdog, as well as an author and poet. She survived bladder cancer — which she suspects was linked to water pollution — and gained international acclaim for her book Living Downstream: An Ecologist’s Personal Investigation of Cancer and the Environment, overlaying cancer data and federal toxic release statistics.

In 2011 Steingraber won the prestigious Heinz Award. By then she was living in upstate New York, where high volume horizontal hydraulic fracturing (or fracking) for natural gas had exploded on the scene. Steingraber used the $100,000 prize to start the grassroots organization New Yorkers Against Fracking, a movement that soon spread to other states and launched her as an international leader on the issue.

Steingraber has spoken out against the controversial fracking regulations in her home state of Illinois, and traveled to Europe to meet with people dealing with drilling in their communities.

She spent a few days in late June at Carnegie Mellon University with a delegation of reporters convened by the Society of Environmental Journalists. The group heard from industry sources, academics, scientists, landowners and activists about the ways fracking has played out in the Marcellus shale, and what the future may hold.

The Marcellus shale stretches across New York, Pennsylvania, West Virginia, Ohio and Maryland, one of the places where hydraulic fracturing with horizontal drilling for natural gas first took off less than a decade ago.

In a keynote address during the conference and conversations afterwards, Steingraber described her view of the bigger picture for fracking, in the Midwest and beyond. Even while urgent debates focus on regulations, laws, policies and taxes related to fracking, Steingraber encouraged journalists, residents and community watchdogs to also focus on deeper and longer-term questions.

There has been much discussion of health effects potentially related to fracking, including reported headaches, skin problems, respiratory problems and gastrointestinal distress that many believe could be linked to air emissions from drilling operations or well water contaminated by the operations.

Steingraber said there is more need for in-depth long-term studies of potential health effects, and noted that she will soon be publishing a compendium of existing studies on the theme.

Among the potential fracking-related health issues which have not been seriously studied, Steingraber pointed to the bacteria, archaea, fungus or other microorganisms that actually live in the shale. She said these could potentially be brought to the surface, introduced to groundwater or otherwise moved from their original location, possibly causing consequences.

“The Marcellus is like an underground chalkboard – it’s not inert – it is a living ecosystem, like a subterranean coral reef,” she said. “There are living things down there.”

She also pointed to occupational health issues, with fracking and frac sand mining. Federal statistics show oil and gas industry workers have fatality rates about eight times higher than U.S. jobs as a whole; there are not specific statistics for fracking-related jobs.

“Workers are often left out of the story here,” she said. “Workers handle those chemicals, workers are exposed to silica (in mining). If fracking jobs are killing jobs, we need to know that.”

Steingraber would like to see more investigation of the mining of frac sand in Minnesota, Wisconsin and northern Illinois. She joined the journalists on a tour of fracking operations in the hills around Pittsburgh, where company officials pointed out three “Sand Kings” – dusty yellow trailers decorated with a bedraggled American flag, stocked with sand from the Midwest. The group sifted samples of the sand – extremely fine grains with an almost silky feel. During fracking the sand is pushed into tiny fractures in shale to prop them open so gas or oil can escape and be collected.

The frac sand mining industry mushroomed so quickly that there is still relatively little regulation specifically crafted around it, and few studies on mining’s impacts on nearby communities. There are fears that frac sand mining could cause silicosis, a debilitating lung disease.

Steingraber explained that since silicosis is an auto-immune disease, triggered by the body’s response to silica particles in the lungs, it can continue progressing even after someone’s exposure to silica stops.  She noted that there is a dearth of science looking at silica exposure other than in the context of underground mines, construction or other such industries.

“Wisconsin’s number one export is now ‘itself,’” she said. “It has loaded so much of itself on barges and sent them away. Meanwhile we don’t have any data on exposure of four-year-olds or pregnant women or people with emphysema to silica, because we’ve never exposed the general public to it before. Now we see people having bake sales to raise money for silica dust monitors, or doing civil disobedience against sand mining.”

But fracking has long raised fears of chemicals polluting the groundwater, surface water or air, especially since in various states companies have resisted revealing what chemicals they use for fracking.

“When we frack we’re not only bringing out methane but all these other hydrocarbons that are shunted into the chemical industry and used to make stuff,” she said, pointing to a proposal for an ethane cracker in Pennsylvania’s Allegheny County, which would transform ethane from natural gas into ethylene, a component of plastics and other synthetics. “So our chemical economy is driven not by human need but by the waste disposal problems of the gas industry.”

Steingraber noted that while the Environmental Protection Agency is formulating rules to reduce carbon dioxide emissions from coal-fired power plants, there is currently no equivalent effort to limit methane, a much more potent though shorter-lived greenhouse gas.

“If there is no disincentive to put methane into the atmosphere, we’ll just be driving fracking,” by limiting carbon dioxide emissions, she said. “Methane is the silent partner in crime. Methane has tripled in the atmosphere…and the closer you get to the tipping point (of catastrophic climate change), the closer we get to the edge of the cliff, the greater we can see the role of methane. So the more time goes by, the more we need to stop methane emissions.”

Speaking before Steingraber’s keynote, Pennsylvania Department of Environmental Protection oil and gas management bureau director Scott Perry said that advances in the industry and the basic mechanics of fracking mean that it is extremely unlikely aquifers used for drinking water would be contaminated with gas or chemicals.

At the fracking site, company officials told journalists that air emissions are monitored. During the journalists’ conference, sources including Dr. Terry Engelder, a prominent scientist at Penn State University, indicated that companies carrying out fracking have done a good job adopting best practices that should prevent contamination of the water or air.

But Steingraber said it continues to be critical for residents to keep tabs on the industry.

At the site she pressed for specifics on how often and where exactly air monitoring occurs, and what components are targeted. Ultimately she seems convinced that the risks and impacts of fracking do not outweigh the benefits, despite industry and regulators’ assurance that it can be done safely and responsibly.

She voiced this opinion in the Illinois fracking debate even at a time when major environmental groups were working with industry to try to craft meaningful regulations – a collaboration that has since largely broken down as the Illinois Department of Natural Resources proposed extremely industry-friendly rules.

Steingraber describes the opposition to fracking as a “New Abolitionist” movement aimed at changing something which has been accepted as normal by other segments of society.

“Even though the economy used to be dependent on slave labor, it was wrong,” she said. “We feel ourselves on such war-time footing. We seek an acceleration of energy policy that is reliant on wind and solar…We speak of standing at an energy crossroads – one signpost points toward a future digging even more fossil fuels, the other to renewables. We believe you can’t do both, and you have to choose.”