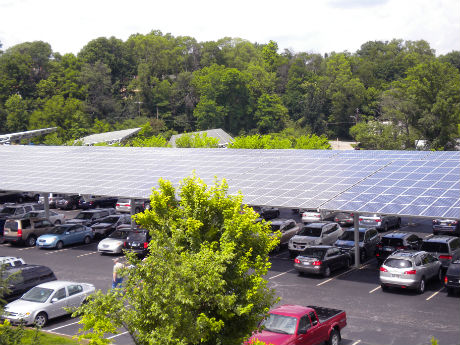 A giant solar panel canopy is exceeding expectations by cutting electricity costs for the Cincinnati Zoo & Botanical Garden. At the same time, 1.5 million visitors each year get an up-close look at clean energy.

The 6,400-panel solar array covers most of the zoo’s Vine Street parking lot. At peak operation, it supplies roughly 20 percent of the Ohio zoo’s electricity. As a bonus, the array shades visitors’ cars on hot summer days.

“It’s been everything we wanted and more,” said Mark Fisher, Vice President for Facilities, Planning and Sustainability at the Zoo.

Although the company’s headquarters in Milford, Ohio, are less than 20 miles from the Zoo, the project began in Phoenix five years ago. During a casual conversation at a green building conference, company president Steve Melink expressed interest in doing a big public solar energy project.

“I’ve got a big old parking lot,” Fisher remembers saying. “Let’s go back to Cincinnati and talk about it.”

The array began operating in 2011. However, getting the project off the ground took a year and a half. For starters, the costs would run around $11 million. The zoo didn’t have money to invest up front.

Yet the parties were persistent and creative.

“We were able to finance the project through a number of means,” said Melink. A variety of tax credits, accelerated depreciation and some debt financing all played a part.

The project also promised to provide income for the Zoo, since it would buy electricity from the array at a set price lower than the cost of buying power from the grid.

One key to the solar array’s financing is a contract to sell solar renewable energy credits, or SRECs, to the company FirstEnergy Solutions. In 2012 FirstEnergy Solutions also signed a municipal aggregation agreement with the City of Cincinnati promising to provide customers 100 percent green energy.

Melink, who has also installed solar arrays at Urbana University and Cedarville University in Ohio, said the bill shouldn’t affect the Zoo’s solar array. But he said it could dim prospects for future projects within Ohio.

Among other things, the law eliminates the in-state requirement for solar and other renewable energy. It also announces a goal for future legislation to reduce “the costs of future energy mandates, if there are to be any.”

Both provisions could make it harder to fund new projects like the Zoo’s array in Ohio.

“We will develop more projects outside of Ohio,” said Melink. “We’ll be creating jobs for assemblers, electricians and other trades of people outside of Ohio.

The solar array at the Zoo can produce up to 1.56 MW of electricity — enough to power 200 homes for a year. Besides saving the Zoo money on roughly a fifth of its electricity, the project has had other benefits.

“It’s diversified our energy portfolio,” said Fisher. Because the Zoo pays a fixed rate for electricity from the array, he said, “I don’t have to worry about fluctuations in the market.”

The Zoo’s profile of electricity usage from the grid has also changed. Many other facilities’ electricity demands peak in the afternoon on hot sunny days. But that’s when the solar array produces the most electricity for the Zoo.

“Our peak demand is way down,” said Fisher, which means a better rate for the power the Zoo does buy from the grid.

When the solar array opened three years ago, the Zoo was in the midst of a huge expansion. Now, in addition to the solar array, the Zoo has other green building projects and energy-saving measures.

For example, geothermal ground-source heat pumps sit under the ticket area and large entry plaza at the Zoo. Groundwater helps cool that area’s buildings in summer and assists in heating them in the winter.

“Moving forward, the operating costs for that building will be zero dollars,” Fisher said. And for the Zoo overall, the number of kilowatt hours drawn from the grid per square foot of buildings is down dramatically.

The Zoo is planning to exercise its option to purchase the solar array from Melink after the current seven-year contract. The cost at that time will be roughly $2 million, a price Fisher said would ultimately pay off.

“Taking the long view is something we take quite seriously here,” he said.