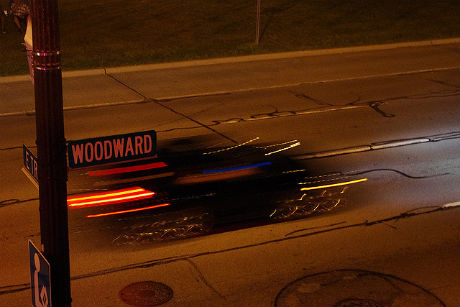 Detroit streets will get brighter with LED lights. Photo by Jellaluna via Creative Commons.

There’s been plenty of dark news out of Detroit recently.

But one bright spot in the beleaguered city is the ongoing replacement of aging street lights with highly efficient and attractive LED street lights. By July 1 Detroit had installed its 10,000th LED street light, putting it ahead of schedule on a plan for 65,000 new such lights through 2016.

Other municipalities statewide are also moving to adopt LED street lights, thanks to federal supports and an optional energy efficiency program providing rebates throughout most of the state.

Fifty percent of Detroit’s street lights are not working, according to Public Lighting Authority of Detroit CEO Odis Jones. The Authority is installing the new lights by leveraging federal tax credits available through the United States Department of Energy (DOE), which has recognized Detroit as a leader in replacing its street lights with LEDs to achieve a lower carbon footprint.

“Broken windows theory tells us that when you improve lighting it has a big effect on crime,” Jones said. “We’re going to have 65,000 lights that are working. It’s going to improve the safety of our communities. Kids in Detroit sit on their porches.”

Meanwhile Michigan municipalities in the utility Consumer Energy’s service territory outside Detroit will also have an opportunity to install new LED street lights thanks to an order signed April 1 by the Michigan Public Service Commission (MPSC), creating a subsidy program for the energy efficient lights.

“This order itself wasn’t anything earth-shattering,” said MPSC energy efficiency manager Rob Ozar. “What is earth-shattering is that LED street lighting is taking the state by storm. We expect LED lighting to take 80 percent of the market share.”

In the past many municipalities were reluctant to adopt LED street lights because of their high cost compared to sodium vapor lamps. LED prices have come down significantly in recent years, though the relatively high cost of bulbs is still a “market barrier,” Ozar said.

The program allows rebates of $47 per bulb, Ozar said, which covers about half of the cost difference between an LED bulb and a typical bulb.

Despite the still steep initial cost, LED street lighting can be the cheapest alternative over the long haul.

“You have to roll a truck out to change a bulb,” Ozar said, noting that LED street light bulbs last for decades, even when they are on for 4,300 hours per year. “The combination of the high hours of operation and the (lower) maintenance really make this a compelling economic case.”

“Municipalities across the state are actively in dialogue about conversion to LED lighting,” he said.

Communities are interested in saving money for their taxpayers and trimming their budgets. Successful energy efficiency program marketing by Consumers Energy has helped to build interest in new programs for municipalities, Ozar said. (A representative of Consumers Energy declined to comment because the program is still in its early stages.)

“Previously, the general service metered lighting customers weren’t paying a surcharge and there was demand,” Ozar said. “Customers were contacting the utility and saying, ‘We’d really like to participate in the energy optimization program.'”

This new program creates an energy optimization surcharge for general service metered lighting. The surcharge is authorized by Public Act 295 and has a cap of 2 percent of the utility’s annual revenue.

The MPSC is also providing market transformation incentives for Consumers Energy’s residential and commercial customers to switch to LED lighting in 2014 and 2015, Ozar said.

Momentum in Michigan and around the world

On a worldwide scale, payback periods for municipal LEDs are becoming reasonable with or without subsidies, according to a 2014 report from Navigant titled “Smart Street Lighting.” The report predicts LED street lights will make a “nearly complete takeover” of the market during the next few years.

According to the Navigant report, switching to LED technology brings improved performance for city residents and cost savings for municipal governments.

Testing by the Electric Power Research Institute has shown that LED streetlights create less light pollution and glare than their predecessors did. Counting the infrastructure costs, the return on investment is estimated at 15 percent, assuming the LED installations could decrease energy use by 50 percent, according to the report’s abstract.

Even though LED bulbs’ long lifetimes will eventually lead to a moderate drop in revenue for the bulb industry, it is expected to provide a booming business for some time to come.

“They’re going from about 0 to 100 miles an hour in about 60 seconds,” said Byrd, who was previously employed by workforce development organizations and estimated the LED street light boom could create tens of thousands of jobs in Michigan.

“Because of the drop-off of employment in the auto industry, those lighting experts transitioned into the built environment,” Byrd said. “There are many Michigan-based lighting manufacturers that are really leading the way when it comes to LEDs in fixtures.”

Since the LED lights require less maintenance, the switch could raise fears of municipal job cuts. But Byrd said that the state’s municipal workforces have already been culled significantly during the recession and have not ramped back up, so LED street lights shouldn’t have any further impact.

Most LED street lighting projects worldwide are now being completed without the addition of sophisticated controls, according to the Navigant report. But LED lights make it possible for cities to add advanced control systems.

In 2014, the National Electrical Manufacturers Association adopted a standard in the U.S. which specifies how to make LED street lights compatible with manufacturer-supplied dimming and wireless communications controls.

Early LED street lights, Ozar said, provided too much direct light. This required cities and utilities to change the spacing of their fixtures. The industry has since solved this problem.

“Our exteriors will look different at night because of the application of the LED lighting,” Byrd said. “They can direct lighting exactly where they want it to be.”

“There’s been a lot of engineering that’s gone into those fixtures,” Ozar said. “They’ve done a great job of balancing the diffuse and direct light.”

With LED street lights, “you can actually see people’s faces,” Byrd added. “You can make out details much better.”