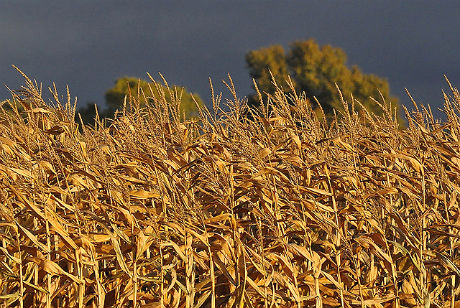 Potentially dire financial and health consequences from climate change are predicted in a report released June 24 by the Risky Business Project.

The effect of rising temperatures on agriculture and energy demand will be particularly drastic in the Midwest, the report predicts. And the way Midwestern farmers, utilities and other industries respond will be crucial.

The project quantifies potential risks in three sectors – energy, agriculture and coastal property – for specific regions including the Midwest. While the Midwest is safe from rising seas, other impacts from climate change could have extensive financial ripple effects.

The corn, soybean and wheat farms of the Midwest account for $135.6 billion annually. Illinois and Missouri are likely to see crop yield decreases up to 15 percent within two decades, the report finds, and losses of up to 73 percent by the end of the century. The region as a whole can likely expect crop yield reductions of almost two-thirds by the end of the century.

The report says the upper Midwest, along with the southwest and southeast parts of the U.S., will see more extreme temperature rise than some other parts of the country, with “several months” of temperatures over 95 degrees F expected. By 2080 residents across much of Illinois, Iowa and Ohio will see about 75 days topping 95 each year, compared to fewer than 10 over the past few decades.

Such heat would likely have a serious impact on labor productivity, since outdoor work including landscaping and construction would be greatly limited. Human health could suffer serious consequences as well.

The U.S. has so far never recorded a day that tops the “Humid Heat Stroke Index,” where humidity and temperature are such that the human body can’t regulate its temperature or keep skin at the 95 degree threshold needed to prevent deadly overheating. Worldwide this threshold has only been reached once, in Saudi Arabia in 2003, according to the report. The closest the U.S. has come was a day in Appleton, Wisc. in 1995.

But such deadly hot and humid days can be expected under current climate change projections. If climate change proceeds at a “business as usual” pace, by 2100 Chicago could see up to 10 days per year when it is unsafe for humans to be outside.

Such a climb in hot and humid days means a great increase in electricity demand for people to continue working and even simply to survive. Nationwide the need for electricity generation capacity could grow by 95 GW largely because of air conditioning demand, the report notes, with a disproportionate amount of this growth in the Midwest and Great Plains.

Midwest Energy News: What specifically should Midwestern government agencies be doing to adapt to the rising temperatures and possible effects on agriculture? Do we need more farm subsidies? More public health outreach?

Gordon: It’s really important to note that the southern part of the Midwest is very different from the northern part of the Midwest. Climate impacts are inherently local. But the bottom line thing we’d say is whether you’re a private or public sector investor, you have to incorporate climate risk into any investment you’re making – roads, bridges, supply chains. Those decisions will be affected by climate impacts in the next 20 to 30 years and beyond. You try to not only build things that are resilient, but also invest in projects that reduce emissions move the curve downward. Particularly with the heat impacts, there are things we can do today to actually change that future, not just adapt to it.

The possibility of days where people literally cannot survive outside was one of the most shocking things about the report. Though you were not focused on social services, is there anything you can say about what needs to be done to protect people’s lives and health?

We focused more on economics, but some of the issues we studied are basic to our lives. If you live in society, you have to care about them. Extreme heat and humidity impacts — days at the high end of the humid heat stroke index we describe in the report — will be most severe on outdoor workers and high risk populations, which includes people who work outdoors and those who live outdoors.

From the private sector side, there will have to be significant changes to how people do work – doing construction during the night instead of the day, far fewer hours on outdoor activities. On the public sector and social service side, lots of things will have to be different. Number one, people literally won’t be able to live outside. That has huge implications for homeless services, transitional housing services. For example during the city of Chicago heat wave in 1995, hospitals were totally overwhelmed. Henry Cisneros told us about the Clinton administration sending out FEMA refrigerator trucks to Chicago because morgues didn’t have capacity. That kind of situation definitely has implications for planning.

In terms of the effects on agriculture, it sounds like there could be a shifting of crops to adapt and some areas will actually be more productive agriculturally. Is it possible that the net impacts on agriculture won’t have to be very negative?

The agriculture industry is used to the need to adapt to extreme weather. You already see a lot of that adaptation happening. But the story of agriculture in the Midwest is one of very local impacts.

In Iowa, Illinois and Indiana, there are counties that will see a significant loss [in corn and soybean yield] and may need to shift to other crops or other industries completely. Yes there are also gains in [crop yield] in the upper Midwest. But that fact is likely cold comfort to me if I’m an Iowa farmer. If I’m a big agricultural company, I can probably move things around on the map and ensure the global food supply stays secure. But if I’m a small farmer, changing my crop has serious implications. Different crops bring in vastly different amounts of money and require different equipment and training and expertise.

I don’t foresee a U.S. national food shortage any time soon, but I do think there are farms and farmers who will experience significant climate impacts.

The report focuses on the increase in energy demand and cost because of climate change, and the Great Plains sees the greatest increase. Why is this the case?

The Great Plains is a weird region – the way we define it, the Great Plains stretches from Montana to Texas. The bottom part of the Great Plains will have extremely high temperatures in this century. There you’ll see a combination of increased air conditioning, more demand for electricity, but also power plants and transmission lines themselves become less effective when it’s really hot. The power plants need to be cooled down, so they have less capacity because they’re using energy to cool. And transmission lines are just less effective when it’s really hot out.

You have low capacity plus high demand, resulting in higher energy prices. It’s a good argument for distributed generation of renewable energy, which is both adaptive and can help bring down carbon emissions.

What kind of firepower does this committee bring to the debate? The report says the goal is not to reach climate change skeptics, but will this have an impact on institutions or politicians who have not listened to other arguments?

We absolutely wanted this to be a bipartisan effort, to take the issue out of the partisan debates. I do think that was a big part of why it got the attention it got – the combination of the messengers being bi-partisan and the message being very business-oriented. We’d really like to see this become part of the mainstream business approach of both the private sector and local and state and federal governments. Climate change needs to get out of the sustainability officer arena and back to the basic planning and budgeting and investment side of every organization.

How do you strike a balance between moving to curb climate change and greenhouse gas emissions, and preparing for the inevitable or likely effects? How do you prioritize efforts and investments between adaptation and mitigation?

There’s a significant amount of adaptation people should be thinking about, because effects we’re seeing today are based on business decisions made 30 or 40 years ago. By the same token, business decisions we make today have to be about preparing for impacts 30 years from now. [For] many of those further out impacts, like human heat stroke index, if we don’t want to see those impacts we need to actually change our current path. The Risky Business Project does not push for any specific policy — we want people to understand their specific climate risk and then react to that risk. But we do make the case in the report that we need to bring down emissions.