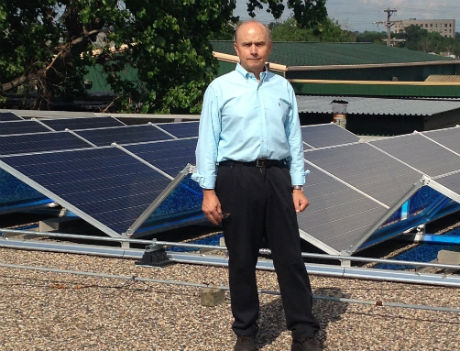 The company Crankshaft Supply takes old crankshafts and reconditions them for resale. Hence owner Jay Miller sees his operation as “an enormous recycler.” He wanted to get greener still by producing some of the energy his re-manufacturing facility consumes in large quantities.

Solar panels were appealing, but the capital cost was beyond his reach, and he couldn’t get enough financing from a banker he consulted.

“They wouldn’t have loaned us money for the entire project,” Miller said. He was told that photovoltaics in the upper Midwest “don’t have the track record” to justify the funding he sought.

But Miller was able to get his solar installation thanks to an increasingly popular funding mechanism known as Property Assessed Clean Energy, or PACE.

The bank agreed to loan Miller half the money he needed to have a 40-kilowatt system installed on the roof of his Minneapolis business. The other half of the funds came from PACE.

“PACE is what made this deal happen,” Miller said.

Picking up the PACE

The city of Edina was the first one in Minnesota to create a PACE program. A restaurant company used it to obtain a loan for energy efficiency upgrades. But there was hardly a rush among governments to get on board.

It turned out that navigating the complexities of creating a PACE program from scratch entailed “too much risk, cost, overhead and staff time to figure out how to do it,” according to Jeremy Kalin,  a member of the state legislature  at the time. So Kalin decided to take matters into his own hands and drafted new PACE legislation.

Now, as president and chief executive officer of the company Eutectics, Kalin has created a PACE template that steers businesses through the process of getting involved with the program.

Minneapolis has adopted Kalin’s structure, and the Minneapolis City Council recently approved three PACE projects that are the first to use the Eutectics template. They are borrowing a total of $685,495.

The center’s executive director, Tom Mowbray, called PACE “an incredible tool for companies who want to complete energy-related projects – with 25 percent savings already showing up on our electric bill.”

With a structure now in place that any local government can adopt, Kalin said, “It’s easy for cities to join.”

And once a city signs an agreement to participate, businesses, non-profits and owners of multi-family housing complexes in that community may apply to use PACE financing.

“Many cities have said they are ready to join,” Kalin said.

Several Minnesota communities now offer lending through PACE, including Eagan, Eden Prairie, Cottage Grove and Sherburne County. Kalin said that Minnetonka and St. Louis Park are working towards agreements that will allow them to use his company’s template.

The St. Paul Port Authority administers PACE of Minnesota. In that role, it reviews loan applications, as well as credit histories and the actual technical details of proposals. Bremer Bank is providing $10 million in credit, which PACE borrowers repay through a special assessment which is added onto their usual property tax bill.

Funds for PACE of Minnesota are provided by the sale of revenue bonds to third-party capital providers, resulting in a public-private partnership that relies almost entirely on private capital.

PACE interest rates are not much lower than other lenders’ rates, according to Kalin. However, he said, other lenders typically won’t provide the loan products necessary for energy improvements.

To date, 31 states and the District of Columbia have passed PACE legislation. Kalin said that he learned a lot from California, where about 150 cities and counties have signed the agreement that allows them to issue PACE loans. He said he is now sharing his know-how with other states including Arkansas and Utah.

“A lot of people are trying to figure out how to do this efficiently. We’re sensing a lot of interest in solar and deeper efficiency in buildings. We hope this creates a manageable path to getting financing.”

It did for Jay Miller and Crankshaft Supply. PACE provided him with $56,000, which he has to repay through a special property tax assessment over nine years.

“We have only so much cash to operate with,” Miller said. “It would have been hard to justify using it for solar panels because of our other operational needs. A machine that will produce crankshafts will win out every time.”