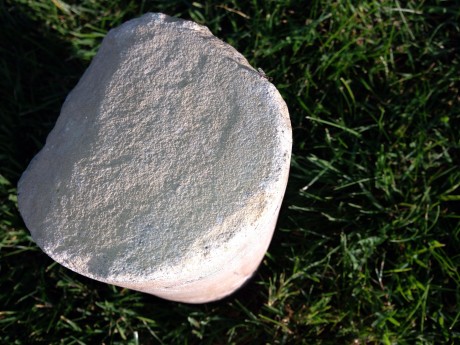 This Mount Simon sandstone core shows one of the types of rock used for deep injection wells in Ohio. Photo by Kathiann M. Kowalski.

The oil and gas boom made possible by hydraulic fracturing, or fracking, of horizontal wells has also led to dramatic growth in Ohio’s injection well disposal industry.

The state now has more than 200 active injection wells for oil and gas waste, as shown on an updated map released this month by the Ohio Department of Natural Resources (ODNR). Over 16 million barrels of wastewater were pumped into Ohio rock formations in 2013 — an increase of more than 2 million barrels from the previous year. In the oil and gas industry one barrel equals 42 gallons.

In contrast, only seven injection wells were active in neighboring Pennsylvania, which sends millions of gallons of its fracked wells’ wastewater to Ohio.

Besides bringing in revenue for companies, the growing industry produced nearly $2 million in fees for ODNR last year. According to agency spokesperson Mark Bruce, that money supports the agency’s regulatory program. Yet environmental groups have questions and concerns.

Where should the waste go?

Fracking involves pumping millions of gallons of treated water into deep shale formations to crack the rock. Pumped-in sand props the fractures open so trapped oil and gas can flow out, along with much of the water. Large shale resources in Ohio and neighboring states include the Marcellus and the Utica plays.

Drilling, fracking, and operating fracked wells produces massive amounts of wastewater. Wastewater from drilling is known as pit water. Flowback is fluid that comes back to the surface during the initial period after fracking. Produced water comes up with oil and gas while the well is in operation. Although some water is reused for fracking operations, all the wastewater must eventually go somewhere.

“It makes sense to put the stuff back where it came from—deep into the earth,” said Jeffrey Dick, chair of the Department of Geological and Environmental Sciences at Youngstown State University.  Dick met with journalists in late June as part of a Shale Country Institute organized by the Institute for Journalism & Natural Resources, along with other representatives from government, industry and citizen groups.

Wastewater from fracking is very salty. It also contains substantial amounts of heavy metals, along with dissolved radioactive materials, such as radium. “It’s a hazardous material, so you don’t want to leave it sitting around on the surface,” Dick said. “You don’t want to be spreading it on roads for dust control.”

A destination for wastewater

Disposing of wastewater from fracking has become a booming business in Ohio. The state’s geology is well-suited for it, and the state’s regulations are also conducive.

On the regulatory side, Ohio has had “primacy” for its underground injection program since 1983. That means ODNR has direct authority to grant permits, conduct inspections and otherwise regulate water disposal. In contrast, Dick said, “If you want to do an injection well in Pennsylvania, you do it through the federal government.”

The boom in injection wells has created opportunities for some companies.

After nearly 30 years of working on conventional oil and gas wells, American Energy Associates in Cortland, Ohio, was having trouble competing with larger national and international companies that came into the state to drill for shale oil.

“I couldn’t compete with the big boys,” said American Energy Associates president Bob Barnett. “We had a problem getting investment money, so we decided to shift gears.”

Underground injection wells are now a big part of the company’s business, and attracting capital has become much easier. Investors that might only have put $5,000 into a conventional well drilling project before might now pay more than ten times that amount for an interest in an injection well project, Barnett noted.

Drilling “Class II” injection wells for oil and gas wastewater is similar in some ways to drilling conventional production wells. However, the injection wells go very deep and are completed in a different way.

“We drill the well all the way down into the Mount Simon” sandstone and stop in that layer, Barnett said, referring to a formation just above granite “basement rock” in eastern Ohio. Drilling stops short of that Precambrian rock because researchers found that another company’s operations in that layer had triggered earthquakes.

Two layers each of pipe and cement extend down past any potable groundwater aquifers—geologic layers that hold fresh water supplies, Barnett explained. A single cement casing then surrounds pipe to about 1,000 feet down, holding everything in place. Below that, Ohio’s Class II injection wells have open hole completion, meaning there is no pipe in the hole.

Heavy wall tubing goes down through a well’s pipe to the injection formations. In eastern Ohio, those include the Mount Simon and other sandstone layers, as well as some limestone layers. Although each of those layers is hard rock, it has pores, or spaces inside it. Just as a sponge can absorb water, those pores can hold fluids.

ODNR limits the maximum injection pressure for shooting wastewater down through the tubing, depending on depth and other factors. American Energy’s pumps are capable of 3,500 pounds of pressure per square inch, but Barnett prefers to operate at a steady lower level without “any spikes.”

“We want to keep that thing flat-lining across the board so we know it’s just kind of shoving that water in there real slow and easy,” Barnett said. “Let the formation take it, rather than trying to ramrod it in there.”

“The pressure on the well is going to tell you what’s going on down in the hole,” Barnett stressed, so careful monitoring is essential.

When pressures at one of the company’s wells began rising to a critical point, for example, the well shut down. After several unsuccessful tries at fixes, the company finally treated the well with hydrochloric acid. Afterward, the well worked normally, which suggested that bacteria had been plugging the pores “like a cork,” Barnett said.

Though the proliferation of injection wells offers economic benefits, environmental and citizens’ groups say it raises serious concerns about the possibility of water contamination, earthquakes and other risks.

“We’re talking about ultimately billions of gallons of toxic and potentially radioactive waste being forced underground, and we don’t know where it might migrate,” said Kathryn Hanratty, an advocate for Frack-Free Geauga, a grassroots group that opposes fracking.

Among other things, concerned citizens have limited time under Ohio’s rules to comment on permit applications and may be unable to effectively challenge rulings on those comments or applications by ODNR regulators.

Last month, for example, the Ohio Oil & Gas Commission dismissed an appeal by the Athens County Fracking Action Network, saying it had no jurisdiction to hear the case.

Compliance and enforcement are also issues. Prosecution for egregious violations happens, as it did when a Youngstown man admitted dumping fracking waste in the Mahoning River. However, critics worry that too many other violations escape enforcement.

“The Ohio DNR can’t even issue a fine for a violation,” Kunkemoeller said.

Simmers confirmed that ODNR has “a penalty authority but not a fine authority.” The distinction means the agency cannot unilaterally demand money for violations. Unless a company enters into a voluntary compliance agreement to resolve alleged violations, the agency must go through the state attorney general’s office to pursue a civil or criminal action, Bruce said.

Hanratty and others worry that “orphan wells” – old wells drilled decades or even a century ago – will provide vectors for contamination from injection wells to spread into aquifers.

“Orphan wells dot our landscape,” said Hanratty, though she thinks ODNR is doing a “good job” searching for such old wells.

Dick however said he doesn’t “see orphan wells as being an issue,” because the deepest old wells were thousands of feet shallower than the layers used for waste injection today.

“What I really see being an issue is spillage of brine and flowback water at the surface,” Dick said. Rules require drilling and injection operations to have containment systems, but spills can still happen in highway accidents involving trucks carrying wastewater or under other scenarios.

“Spilling has always been the problem with the oil and gas industry,” Dick said.