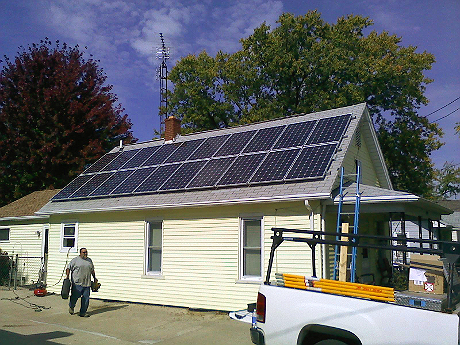 A bipartisan group of Michigan lawmakers has introduced a bill package meant to encourage renewable and distributed energy development for utility customers.

Its sponsors, which include 12 Democrats and five Republicans, say it’s a different approach to expanding Michigan’s renewable energy portfolio, doing so on a small-scale level rather than a statewide mandate to be achieved by utilities. Utilities here are on track to meet the state’s 10 percent renewable standard by 2015.

After being considered for roughly a year between legislators and experts, both of the bills were introduced in mid-June and have been referred to the House Committee on Energy and Technology.

“I just want to make sure we do everything we can to promote renewables and clean-energy development in Michigan,” said state Rep. Jeff Irwin, a southeast Michigan Democrat who is either sponsoring or co-sponsoring all four of the bills. “An (RPS) number isn’t the only thing I’m looking at. I’m particularly interested in fighting for some consumer-side benefits, making changes to the law that make it easier for citizens and business owners to plug into the grid and make it work.”

“There are a number of things we do here in Michigan that just frustrate people in investing in their own properties.”

And given the comparatively uncertain prices of coal and natural gas, Irwin hopes he can get Republican support for renewables via “the tremendous benefit of locking in a price right now that stays constant.”

James Clift, policy director for the Michigan Environmental Council, agrees that the landscape is unfavorable to the average residential customer looking to generate his own energy.

“I think we make it unduly complex for the homeowner, and I think we’re missing some economic development potential,” he said. “Not only could it help small businesses, but it could also make the grid more resilient.”

“It doesn’t seem to be entirely fair or sensible, in my opinion,” McBroom said of the caps on the number of participants and the amount of energy that can be generated.

The bill would strike language from current law that limits customers to “generation capacity designed to meet only the customer’s electric needs,” removing a 20 kilowatt generation cap. It also removes language that allows utilities to opt out of providing net metering if it’s greater than 1 percent of its in-state peak load for the preceding calendar year.

McBroom favors this consumer approach to renewable energy over expanding the state’s RPS, which he said he’s “generally not supportive of” as a “government mandate.”

When the Legislature passed Michigan’s renewable portfolio law in 2008, Clift said, the idea behind net metering was that, “As long as you sized the system to meet your need, you weren’t sizing it to be a net generator, it would be a lot easier to give that person a special incentive.”

Douglas Jester, a consultant at mid-Michigan-based 5 Lakes Energy, said the net-metering cap on system sizes limit what residential or commercial customers can build.

“The larger point (of removing the caps) is just to be true to the idea that people should be able to do self-service, generate power for their own use and as many people who want to,” he said.

Irwin is sponsoring HB 5676, which he hopes could pay customers rates for electricity based on demand and that would serve as an alternative to net metering. Rates would be based on the hourly electricity prices on the MISO wholesale market, which sets prices for the Midwest region, Irwin said.

“If someone is producing power at 2 a.m. when there is no demand, the actual price isn’t too high,” he said. “But at 3 in the afternoon on a hot summer day, if they want to sell it then, they would get a better price.

“This bill is meant to address some of the concerns utilities have about larger-scale distributed generation becoming an issue for them.”

Clift said Irwin’s bill “probably is the one that requires the most change in the current system of doing things. In my opinion, it’s the area where change is most needed.”

Clift said residential customers pay a single amount for electricity regardless of when it’s used, while “utilities are paying much different prices depending on the time of day and year.” So if a homeowner is generating renewable energy during a peak time, “Couldn’t we better compensate those people when it’s generated? Let’s look at all of the factors that really get into the value that power is providing.”

Moreover, such a policy could drive down demand if homes and businesses are designed to take advantage of peak and non-peak hours, Clift said.

“If you price electricity based on peak and non-peak, people start to use it during non-peak hours, which reduces costs to everybody. More attention to the value of electricity when it’s generated is a really good step in that direction,” Clift said.

HB 5674 draws from states like Colorado and Minnesota that have laws related to community renewable energy projects. Instead of just looking at solar installations, though, Irwin said projects could involve any form of renewable energy defined under state law.

The bill adds a new section to PA 295, defining “community renewable energy gardens” as those that generate 2 megawatts or less, include a minimum of 10 subscribers and are owned either by a utility or a third party

The key for such programs as outlined in the bill, Jester said, is that people who own shares of the system can get paid as a credit on their electric bills “so it’s not income that’s then taxed. Because it offsets your utility bill, you get better tax treatment and it really is like you’re avoiding the use of fossil fuel generation.”

Irwin also wants to know what it’ll cost to update Michigan’s “woefully old” grid to provide for more reliability during large-scale outages. He said HB 5675 essentially asks the Michigan Public Service Commission to study microgrid development and also permits all forms of utilities to establish them in their service area.

Microgrids are defined in the bill as “a group of interconnected loads and distributed energy resources that acts as a single controllable entity with respect to the macrogrid and that connects and disconnects from the macrogrid to enable it to operate in grid-connected or island mode.”

Clift said the bill is geared toward large commercial or industrial facilities whose interests require close to 100 percent reliability.

“We should support those businesses and provide a mechanism to isolate them from the grid if need be,” he said.

The bill might also appeal to legislators interested in a deregulated market, Clift said, so utilities aren’t the sole electric providers. “It doesn’t lead to total deregulation, but they might see that as a step in the right direction.”

Some who have been working on the legislation have seen initial skepticism from utilities, which may perceive the bills as competition on the generation side.

“It’s correct to assume they’re probably not too excited about these,” Jester said.

Daniel Bishop, a spokesman for Consumers Energy, said the utility is participating this summer in workgroups set up by Republican state Sen. Mike Nofs to review statewide renewable energy and energy efficiency policies before the state RPS expires next year. He issued a statement specifically on the net-metering bill, expressing overall concerns about cost.

“Consumers Energy thinks it is appropriate to start to develop Michigan’s next energy policy,” he said. “Generally speaking, we support additional cost effective renewable energy. Our overall concern with the House package is that it may force our existing customers to subsidize those customers seeking net metering contracts.”

Michigan’s largest investor-owned utility, DTE Electric, did not respond to a request for comment.

Clift, of the Michigan Environmental Council, said the state may be left with a “balancing act.”

“To the extent we want to encourage renewable energy, how much do we want to see that come from smaller sources?”

And to get enough support around the legislation, it will also need to address cost concerns from the utilities.

“It’s going to have to hit the right balance to encourage smaller distributed generation but not at a level where we’ll see it drive prices up significantly,” he said.

Jester believes it’s unlikely the bills will be taken up before this year’s gubernatorial election in November.

But Irwin hopes the policies will appeal to a majority of the Legislature and reframe the often partisan discussion around renewable-energy development to one that is consumer-friendly.

“Why should we have laws in Michigan or in America that would prevent that person from engaging in participation?” Irwin asks. “That’s kind of a different argument I’m trying to make.”

The Michigan Environmental Council is a member of RE-AMP, which also publishes Midwest Energy News.