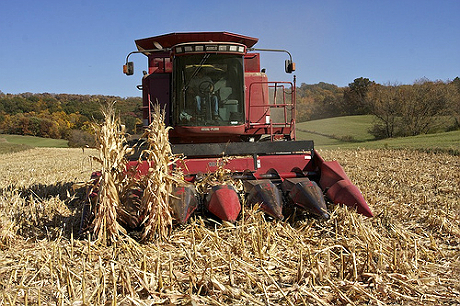 (Photo by lada/photo via Creative Commons)

A farmer-owned refinery in Iowa that recently produced ethanol from corn fiber made a bit of biofuel history, which may be a prelude to more developments to come.

Quad County Corn Processors hiked its ethanol production by about 6 percent by devising a technology for creating ethanol from the cellulose fiber in corn kernels, a material otherwise generally considered a useless byproduct.

The Quad County plant, which produces about 35 million gallons of conventional ethanol from corn starch each year, is likely to produce another 2 million gallons next year using the new technology, said the company’s chief executive officer, DeLayne Johnson.

“We’re getting more ethanol out of the same bushels of corn,” Johnson said.

That first-ever commercial-scale production of ethanol from corn fiber is likely to be followed by several other developments in coming months. Syngenta, an agricultural biotechnology company, in April bought the rights to sell the Quad County technology, known as “Adding Cellulosic Ethanol” (ACE), to other ethanol plants.

“We think there’s a real opportunity for ethanol plants to make additional profit,” said Jack Bernens, Syngenta’s head of marketing and stakeholder relations. “We think a lot of ethanol plants will move in that direction.”

There are about 210 ethanol plants in the United States, clustered primarily in the Midwest. And Syngenta hopes to persuade many of them to invest in ACE, along with its genetically-altered corn seed known as Enogen. First introduced to the market in 2011, Enogen now is grown on about 108,000 acres in the Corn Belt.

It was engineered to contain the enzyme alpha-amylase, which is found throughout nature, most notably in human saliva. Ethanol production has required that alpha-amylase be added to the corn mash, in order to turn the starch into sugar before it’s fermented into alcohol.

The ACE technology offers “some really nice efficiencies,” Bernens said, because it squeezes more energy out of corn that’s already at the refinery, and because it’s using much of the existing technology.

The equipment needed for the second fermentation process is simply connected to the existing ethanol plant.

The technology offers other benefits as well. It triples the amount of oil pulled from the corn mash, and hikes the protein content in the distillers dried grain that remains after the ethanol production, which is often fed to livestock.

Ethanol production could get even more efficient if the U.S. Food and Drug Administration approves a technology now pending before it. It’s a new type of yeast that can convert another type of corn fiber, known as hemicellulose, into ethanol. That process could increase by about another 5 percent the amount of ethanol produced from corn.

Quad County has no role in that technology, but Johnson believes it is very marketable. He is monitoring developments.

“We’ve been told it’s six months to a year out,” he said.

In two other Iowa communities and in one southwest Kansas town, refineries are under development that will produce ethanol from corn stalks, husks and cobs – and possibly other agricultural crops. The refinery being developed in Hugoton, Kansas, by the Spanish multi-national biotechnology firm Abengoa, was to have begun ethanol production in early July.

“We are really close,” said Chris Standlee, Abengoa’s vice president for global affairs. The technology for extracting ethanol from corn stover is still emerging. Consequently, he pointed out, “We are working out all of the final tweaks.”

Although he expects there “won’t be consistent production for some time,” Standlee said he expected some ethanol production by the end of August.

Although in some circles cellulosic ethanol has been dismissed as a technology that’s unlikely ever to come to fruition, Brooke Coleman downplayed the significance of a delay of several months. The Hugoton project is huge, and big oil refineries routinely encounter such delays, according to Coleman, the executive director of the Advanced Ethanol Council.

Before the end of the year, two ethanol plants under construction in Iowa are projected to be producing ethanol from corn stover. The developers are DuPont and POET-DSM, and it’s anticipated that the two plants will produce about 55 million gallons of cellulosic ethanol yearly.

Hanging over the entire ethanol industry, however, is the federal Renewable Fuel Standard. Passed by Congress in 2005, it requires that a steadily-increasing amount of biofuel be integrated into the economy each year. The standard ramps up the amount of mandated cellulosic ethanol, for example, from 1 million gallons in 2013 to 16 million gallons in 2022.

If the Obama administration accepts a recommendation from the Environment Protection Agency to reduce the mandate, Coleman predicted it would have a hugely dampening effect on ethanol industry, especially the fledgling cellulosic part of the industry.

“We have a policy-driven marketplace,” he said. “We are chasing the federal policy.”

Oil companies essentially are forced by the federal standard to buy a fuel that is in direct competition with their fossil-derived gasoline.

“Oil companies are only going to buy renewable fuel that gives them credit under the Renewable Fuel Standard,” he said.

He and others in the industry expect the three refineries nearing completion to go ahead producing and selling cellulosic ethanol, regardless of the decision about the Renewable Fuel Standard. A decision is expected by the end of September.

However, they predict that, should federal ethanol requirements be reduced, the cellulosic ethanol industry may not grow much beyond the three refineries opening this year.