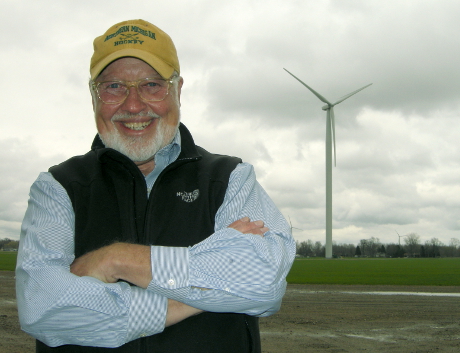 He doesn’t particularly like the moniker, but he goes along with it.

Rich Vander Veen, the developer behind Michigan’s largest wind project, has been called by one clean-energy advocate the “wind godfather.”

But now the godfather is working on a sequel.

Earlier this month, Vander Veen was honored for his “vision and action” in his role developing renewable energy in the state, particularly for the nearly 213 megawatt, 133-turbine project in Gratiot County, about 50 miles north of the state Capitol. He recently received the Helen and William Milliken Distinguished Service Award by the Michigan Environmental Council, the state’s top environmental award.

“He saw the potential for wind energy in Michigan and made it a reality,” MEC Executive Director Chris Kolb said during the honorary presentation. Vander Veen’s mid-Michigan project “became a model for how you build a local wind farm,” Kolb added.

Yet Vander Veen isn’t resting on his laurels. In an interview with Midwest Energy News, he outlined his plan for branching into solar, a renewable sector met with a lukewarm welcome from major utilities, but which renewable advocates say has plenty of untapped potential.

The 63-year-old avid fly fisherman also discussed his role in shaping renewable energy policy in Michigan, not ruling out a run for public office, judging utilities’ response to the renewable energy transition and what he calls misguided attempts by some in the state Legislature to redefine “renewable” energy.

Vander Veen is part of a Pure Michigan Solar team, which is looking to secure a contract with the municipally owned Lansing Board of Water and Light on a 5 megawatt community solar project in the state’s capital city. The Request for Proposal application is due on Aug. 11.

More broadly, “We’re quickly building a Michigan supply chain that will explain to people how the Clean Air Act works in terms of solar,” and at the outset is made up of a team of suppliers. “Going deeper, it’s going to be a series of proposals that go after RFPs like Lansing and see that those community solar projects stay in the Midwest.”

So, the wind godfather is breaking into solar?

“You could say that,” Vander Veen said.

Three key aspects of Vander Veen’s past led him to a life of renewable energy. The first involved the influence of his father, former U.S. Rep. Richard Vander Veen. As a representative of West Michigan and successor to Gerald R. Ford’s seat in Congress, he helped author the Public Utilities Regulatory Procedures Act of 1978.

“It was the seminal federal law requiring utilities to buy power from independent power users,” Rich Vander Veen said of the legislation. His father also started a group called Energy Michigan with the Varnum Law Firm.

A second driver of Vander Veen’s work was with EARTH University in Costa Rica, where he was involved with sustainable agriculture work and first learned of the “triple bottom line” — or “how do you do everything adding economic, social and environmental value,” he said.

“Under energy, any product has to meet the financial test, but also the community and social integrity,” he added. “How do we make this the best project possible?”

In Gratiot County, Vander Veen became known for his hands-on, “Community Participation Model” approach. Those familiar with the process have heard that it took 300 kitchen tables — or 50 cups of coffee per megawatt hour — to make the project happen.

Jeff Ostrander, manager of Breckenridge Village, where the project is located, said of Vander Veen: “Right away, he was one of these guys who brings that anything-can-be-done feeling. What he brought to the table was just that. He brought everybody.”

After a career in construction management, Ostrander didn’t have much experience with township government or economic development when he met Vander Veen five years ago.

Working with Vander Veen “probably excelled me in this position and career at least 20 years,” Ostrander said. “I consider him a great mentor.”

To Vander Veen, good economics and good social responsibility meant locking in with DTE Energy on $94.43 per megawatt hour for 20 years. Gross proceeds of the project end up being $2 million a year spread across 250 families for 20 years.

The project also means $2 million a year in new property taxes, “effectively doubling the tax base of two school districts,” he added, “And not a whole lot of demand for new services.”

And lastly, Vander Veen has always closely followed the policy side of renewable development, particularly when it comes to customer choice. He was involved “knee deep in negotiations for quite a few years” with creating Michigan’s 10 percent by 2015 Renewable Portfolio Standard.

Going forward, “I definitely think we should be talking about 25 percent by 2025, at a minimum,” he said.

And while he’s remained behind the scenes policy wise, he also doesn’t rule out a run for public office.

“I’ve never really had the right time to get there,” he said, “but I do have the freedom of motion. Maybe I’ll look into various opportunities in the future.”

‘We’re all works in progress’

The average price per kilowatt hour was about 10 cents, whereas now it’s around 6 cents, he added. “Meanwhile, the turbines have become much more productive. The blades are longer, broader and much more able to harvest capacity at lower wind speeds,” he said. And synchronizing all of that new wind power to the grid has happened with the Midcontinent System Operator with “virtually no interruptions.”

“Wind has come down dramatically. It exceeded the amount of the capacity factor and we are way below what we projected for the price of wind,” he said.

Yet a common refrain among renewable energy advocates is how major investor-owned utilities don’t act fast enough to encourage renewable development. Particularly in Michigan, DTE and Consumers Energy have been criticized for not taking action on the solar front.

“The best way to put it is that we’re all works in progress,” Vander Veen said of utilities’ ability to transition. “It’s getting better. We had quite a bit of resistance early on from people who would come up through the ranks at respected utilities and were raised on coal and nuclear power.

“Furthermore, working for a utility, by definition, typically doesn’t reward innovation and entrepreneurial thinking. If you’re thinking outside the box, you might actually get punished, not rewarded. Of course, utilities themselves have to be able to make money on this and reward their shareholders. It would be very nice if they’d also reward their customers, put their customers at the center.”

However, the steadily decreasing costs of wind and solar is a beacon of hope, Vander Veen said.

“To the extent we’re coming around to affordable ways to make renewable energy, that’s the key here. They have to be reduced to really really competitive all-in costs so we beat natural gas prices, which happens to be the cost-setter right now. The good news is: We’re doing that.”

On another front, Vander Veen believes recent efforts in the Michigan Legislature to redefine what qualifies as renewable energy — such as burning industrial waste and petroleum coke — would be a “step backwards” for the state.

“It ought to be as clean as wind and solar,” he said. “That’s the measure. If it’s not, then it certainly should not receive the same value and price. Are wind and solar perfect? Of course not. They’re intermittent and need to be blended with other sources.” But they also produce zero emissions, unlike what’s been proposed, Vander Veen added.

“It’s an approach to take care of waste, but don’t call it renewable energy. Call it incineration of waste and attach a separate value to that,” he said. “Don’t diminish the value of truly clean power. Don’t price it out at the same price because you’re not paying the same true cost.”