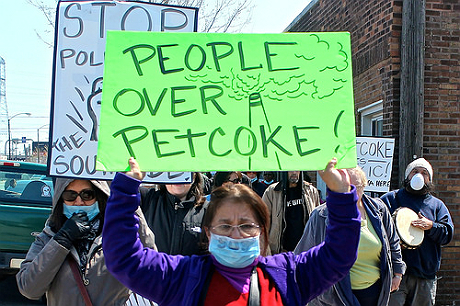 Marcy Juarez, a hospice worker living on Chicago’s Southeast side, says she still can’t open the windows on hot days, because of gritty black dust that blows in.

Her children have urged her to sell the house, but she’s lived there for 35 years, recently remodeled, loves the community and can’t imagine leaving.

Mari Barboza and her family still feel they can’t enjoy a barbecue outside, since the afternoon last summer when a cloud of black dust ruined the food at her mother’s 60th birthday party.

Other residents of Chicago’s Southeast side likewise say their homes, cars and patio furniture are still frequently coated in black grime, as one woman exhibited on a wipe soiled with thick black residue at a community meeting July 28.

They say their lives continue to be seriously impacted by the piles of petroleum coke (petcoke) that the Koch Industries subsidiary KCBX Terminals is storing in the community, despite KCBX’s moves to comply with rules that the city health department issued in March.

Now KCBX is requesting variances from the health department rules, and in its request filed June 9 the company threatened to sue if it doesn’t get the exemptions.

Most notably, KCBX is asking the city to allow piles 45 feet high, while the rules limit piles to 30 feet. It is asking for a flexible timeline of at least four years, rather than two years, to enclose the piles. KCBX also wants more time to cover conveyors, and permission to leave uncovered eight conveyors scheduled to be phased out.

Residents say such requests confirm what they have said all along: that the health department rules are too weak, and that KCBX never planned to fully comply. They say the request for variances has added more fuel to their push for a total ban on petcoke storage and transport in Chicago.

“We’ve been asked by the city, the IEPA and the Attorney General to report uncovered trucks, the size of petcoke piles, petcoke in the air on windy days – we’re being asked to do their job,” said Olga Bautista, a leader of the Southeast Side Coalition to Ban Petcoke. “The bureaucratic process hasn’t yielded the regulations to sufficiently protect our families so we’ve taken this battle to the streets.”

With a series of community meetings like the one held in the Rowan Park field house on Monday night, and other events including monthly screenings of the documentary “Koch Brothers Exposed” from August through November, residents hope to galvanize more support for a petcoke ban. They are developing a petcoke curriculum to be used in local schools. They also plan to make it an issue in city elections in February.

“Over the community’s objections, Alderman Pope and Mayor Emanuel imposed some of the weakest regulations,” said Rich Martinez Jr., who challenged Pope in the last election and who is mulling another bid in 2015. “Our community remains vigilant in demanding a complete and total ban citywide,”

Martinez and his wife said the couple’s five kids were all asthmatics forced to use nebulizers at a young age, and doctors blamed environmental factors. Residents are asking city and state officials to do a comprehensive study of the possible health effects of petcoke.

The National Nurses United labor union has been pushing for a petcoke ban, saying their members see health effects firsthand.

Retirees from the United Steelworkers union have also been central to the campaign against petcoke. They are sponsoring the “Koch Brothers Exposed” screenings. While the nearby U.S. Steel mill once employed 20,000 people, residents learned about the lasting health and environmental effects once it was gone.

“When I was growing up the view they presented to us was that we would be steelworkers, have jobs,” said Robert, a local activist who declines to give his last name. “Now we’re suffering so some other people can be paid. It’s not the 20,000 that used to work at U.S. Steel. It’s 40 jobs [as reported by KCBX] putting your health and the health of your children at risk.”

Controversy over Chicago’s petcoke piles erupted last summer after a wind storm sent a billowing dark cloud over the neighborhood, and photos circulated on Facebook.

“That’s when we put two and two together,” said Barboza, noting they’d seen increasing amounts of black dust – including in her family pool — for several years but hadn’t previously connected it with petcoke storage.

Alderman Pope proposed petcoke ban, but the City Council ended up passing an ordinance prohibiting new petcoke storage outfits but allowing KCBX’s continued storage of up to 11 million tons along the Calumet River. Meanwhile the Chicago Department of Public Health issued its own rules meant to reduce dust and other impacts.

The rules say that petcoke piles cannot be higher than 30 feet. KCBX is asking for 45-foot piles. The rules say that all conveyors must be covered within six months of the March agreement; KCBX wants a year. And it wants to leave uncovered eight conveyors at its north terminal, since it plans to consolidate operations at the south terminal. KCBX plans to cover 26 conveyors, at a cost of up to $1 million each. Twenty-one conveyors are already covered.

KCBX is also asking for a limited variance to rules that water or chemical stabilizer must be sprayed upon petcoke immediately upon transfer. If the temperature is below 25 degrees and the petcoke is already “moist,” the company wants to delay applying water or stabilizer.

“We’ve complied with the vast majority of the city’s new requirements,” said KCBX spokesman Jake Reint. “We’re seeking a small number of limited variances that are allowed for under the rules in order to maintain our customer obligations.”

He said the company has already shortened its piles from 60 feet to 45 feet high.

“Lowering the piles to 30 feet doesn’t provide any additional benefit,” he said. “There simply isn’t enough room under a 30-foot pile-height limit for us to continue meeting our customer obligations.”

Meleah Geertsma, staff attorney with the Natural Resources Defense Council (NRDC), countered that dust blowing off the piles and the “visual blight” caused by high piles is a problem. But the overall volume is the real issue, and higher piles means more petcoke within the same footprint, she said.

“More height allows them to store so much more at the site,” she said. “That big dust problem comes when they’re working on the piles – bulldozing and moving things, when material is transferred onto the pile itself or taken away. The more volume you have at the site from higher piles, the more they’ll be doing that kind of movement.”

The rules also require companies storing bulk materials to enclose their piles, within two years of submitting their enclosure plan. KCBX’s enclosure plan says that the design and planning phase will take two years, and that construction will be complete two years after that – in 2018. It also says that timeline is subject to change.

“They don’t need more time, they’re just stalling and probably planning to stall some more,” said Southeast Environmental Task Force executive director Peggy Salazar. “Once the four years is up will they be asking for another extension?”

Since the enclosure plan is not a variance request, it is not subject to public comment. The document is not on the city website and the NRDC obtained it through a Freedom of Information Act request.

Reint called the enclosure process “a major undertaking” that will involve dismantling the water cannons KCBX installed within the past year to suppress dust. He said the process needs to involve a significant design phase that may include public comments.

“Once design and permitting are complete, the multi-million dollar enclosure project is expected to take about two years to construct and will require more than 300,000 hours of skilled labor resulting in hundreds of construction jobs,” he said. “It took about 28 months for us to complete a similar project in California but with that project there was an established permitting process for covered storage and there were fewer design and engineering challenges.”

The public comment period on the variance requests is open until September 2. A handful of other companies that handle bulk materials are requesting variances, but KCBX is currently the only company storing a significant amount of petcoke in the city of Chicago. After the public outcry, Beemsterboer Slag Corp. was ordered to remove its petcoke piles because it was operating without necessary permits.

In justifying each variance request, KCBX argued that the variance will not mean a public nuisance or adverse effects for the community, since the company says it is currently not causing such problems. The request cites the investments KCBX has made in dust control, including the $10 million dust control system with 61 oscillating “water cannons” that are automatically activated by wind to spray water and chemical stabilizer to prevent dust.

The variance request also lists steps the company has already taken to comply with the city rules, including reducing the speed of trucks serving the facility, forcing trucks to go through a wash before exiting and keeping piles 50 feet from waterways. The company was also ordered to install dust monitors that KCBX says show dust levels within national air quality standards.

But local residents said at the community meeting that they’re still besieged with petcoke dust.

On June 3, the U.S. Environmental Protection Agency issued a Notice of Violation to KCBX regarding emissions of particulate matter (PM10 – with diameter less than 10 microns) from its property. The violation was based on KCBX’s own air monitoring data and wipe tests done by the EPA in April that linked dust in the surrounding area to petcoke because of its chemical composition.

KCBX’s request says that without variances, the health department rules will cause “arbitrary or unreasonable hardship,” and that the company would not be able to fulfill contracts.

Geertsma thinks that assertion is far too vague. She said KCBX should have to provide specifics about how the rules would interfere with their ability to do business.

KCBX stores petcoke from the BP Whiting oil refinery across the border in Indiana, which recently underwent a nearly $4 billion expansion to process more Canadian tar sands oil, which results in more petcoke than conventional oil does.

Residents say that even if KCBX has to alter or cancel contracts because of the regulations, that’s what it takes to protect public health and well-being.

“Their hardship is only a financial one,” said Martinez. “Our community has had to endure several hardships, from environmental and health hardships to a lack of political leadership…As parents we have a duty and obligation to provide hope and a future for our children and future generations. And we intend to do so.”