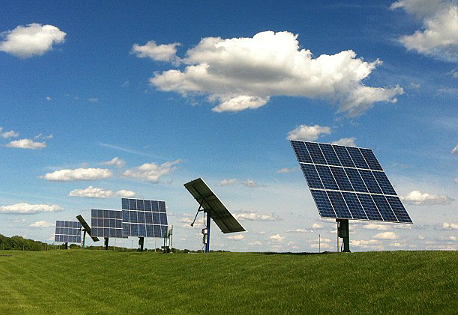 While the cleantech industry is still largely concentrated on the coasts, a new report shows Illinois is emerging as a national leader.

In Clean Edge’s new 2014 Clean Tech Leadership Index, which ranks states according to multiple factors, only one Midwestern state, Illinois, broke into the top 10 this year.

Ron Pernick, co-founder and managing director of Clean Edge, says Illinois’s success is due to a strong foundation of policy and capital.

Minnesota, which was in the top 10 in previous years, has dropped to a lower tier.

In the technology section of the index, wind catapulted a few Midwestern and Great Plains states to high rankings.

How the index works

Clean Edge ranks states and metro areas by combining many variables – from the presence of hybrid cars to the prevalence of patents.

The report does not contain tables for all of these variables. And it does not show the importance of each factor or the source of each data point. But the full data set is available to readers with paid subscriptions to Clean Edge’s research.

States with large urban populations may have advantages. Comparing the performance of the cleantech industry across states often shows the disparity between rural and urban environments.

What put Illinois in the top 10

Patrick Whitty, director of programs at Clean Energy Trust, said Illinois’s strong culture of commercialization, its access to Big Ten universities, and the presence of 33 Fortune 500 companies may have contributed to its success.

A workforce survey conducted by Clean Energy Trust shows that there are approximately 97,000 clean energy jobs in Illinois. The industry is projected to grow nine percent in 2014.

“It’s kind of amazing that we’ve been able to go this far,” said Bob Vogl, president of the Illinois Renewable Energy Association. “We’ve had a diverse range of energy interests competing for a similar marketplace.”

Although energy costs are low in Illinois, interest in solar and wind has been relatively high.

Illinois set a goal of reaching 25 percent renewable energy by 2025. Whitty said the state has a higher solar energy potential than Germany and Japan.

However, the 2025 goal has been compromised by a municipal aggregation law that affects the state’s ability to implement its renewable energy programs successfully through utilities.

“It was actually positive legislation because it gave cities the option to negotiate,” Whitty said. However, he added, the law has “caused a very rapid decrease in the size of the utility customer base in the state.”

Illinois has recently earmarked more funding for solar projects to improve the scenario. Whitty said stakeholders are working to resolve this problem during the coming year so Illinois can still make progress toward its target. “In the year ahead, there’s going to be a big push.”

Unlike most states, Illinois offers both renewable energy and energy efficiency bonds. It ranks in the top 10 nationally in terms of capital.

The presence of a highly-ranked green MBA program at Northwestern University and a Department of Energy laboratory also factored into Illinois’ success.

According to Pernick, Illinois also ranked highly in ethanol use.

“Certainly, the vibrant agricultural economy in the Midwest plays a role in that,” Whitty said.

Pernick said the state also has a relatively high number of LEED-certified buildings .

Chicago has encouraged sustainable construction by passing a benchmarking ordinance that requires commercial building owners to report their energy use. “It really will be an important way to create a market signal,” Whitty said.

How Midwestern states can improve their industries

Rural states face unique challenges when being measured by methods such as this index uses. These states may lack venture capital, capital markets, green buildings, hybrid vehicles, research institutions, and other similar resources.

Pernick recommends that states seeking to expand their cleantech industries leverage their unique strengths. Rural and Midwestern states may wish to focus on distributed generation and energy storage.

Midwestern states can also advance the development of locally available wind and solar power. They can pursue biofuel crop production. And they can leverage policy to facilitate the growth of these industries.

“I think it’s really smart for regions to pick where they want to focus,” Pernick said. For rural Midwestern states, he said, “energy storage is going to be a very significant part of the clean energy equation in the next five years.”

“We really think that the connectedness between the various parts of the clean energy ecosystem is the most important attribute for clean energy growth,” Whitty said.

Clean Energy Trust has received a $745,000 grant to collaborate with Next Energy in Detroit to create a new initiative called the Midwest Innovation Bridge, Whitty said. Programs like this can help bridge the gap between the Midwest and other regions.

Shifting away from coal can also make a difference. Paul Bachman, executive director of the South Dakota Wind Energy Association (SDWEA), said future implementation of Environmental Protection Agency regulations may encourage utilities in South Dakota to phase out their coal plants in favor of renewable energy. The future of these regulations is still in the balance at the federal level.

Reducing the soft costs of solar, including installation costs, would be valuable in Iowa, said Don White, vice president of the Iowa Renewable Energy Association.

White also said only one city in Iowa is providing real estate agents with information about how to sell properties that have solar panels installed on them. Currently, he said, many home buyers in Iowa view solar panels with skepticism.

White said he believes solar leasing, together with greater cooperation from utilities, would help to build Iowa’s cleantech sector.

“Iowans would be willing to pay a little more for renewable energy, but they’re not willing to pay three or four times what it would cost for conventional sources of power,” White said. “Iowans aren’t going to jump on board if they feel like they aren’t getting a good deal.”

Why wind energized the Midwest

This success was entirely driven by wind, Pernick said. Iowa generates 27 percent of its utility-generated power from wind. Meanwhile, South Dakota comes in a close second at 26 percent.

The data above came from the Energy Information Administration and the American Wind Energy Association. These organizations’ national databases tend to omit distributed generation.

However, distributed generation is very important in Iowa, White said.

Maps of wind power in the United States, such as this one produced by Vox, show the concentration of wind generation in the Great Plains and Midwest. These states have very high wind energy potential.

“The place where the wind is strongest is in the Dakotas,” said White. “It has enough to power the nation.”

Bachman says South Dakota has only developed 784 MW of its vast wind energy potential of 882,000 MW.

“Up until recently, we really haven’t seen any opposition,” Bachman said. “There are very few obstacles in South Dakota, much fewer than in neighboring states.”

Although the index does not cover hydroelectric power, Bachman said South Dakota has extensive hydropower infrastructure. It has considered building energy storage water reservoirs near the Missouri River. These reservoirs could be used to store wind power.

“People are worried about high-voltage lines going across their property,” White said. “It really is ironic that environmental groups are opposing it.”

“Transmission is an issue in South Dakota because the system was designed to deliver the power from the dams to the customers,” Bachman said. “It’s our biggest constraint.”