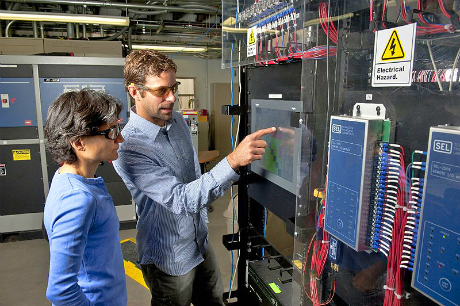 Utility executives, who generally have resisted the incursion of distributed energy such as solar and wind power into their systems, seem to be embracing the prospect of more microgrids coming online.

News website Utility Dive recently surveyed about 250 executives of utility companies to gauge their thinking on the decades-old microgrid concept. Some 97 percent of the respondents said that they could envision microgrids eventually being a “viable business opportunity” for them.

“It seems to me that utilities have really turned the corner in the past year in their views of microgrids,” said Michael Burr, director of the Microgrid Institute, a collaborative organization that focuses on key issues affecting microgrids and distributed energy assets around the world. He said he’s noticed an uptick in recent months in inquiries from utilities, and in “positive conversations” about microgrids.

A microgrid basically is a group of interconnected loads and distributed energy sources that serves as a single power-producing and consuming entity. A microgrid can feed power into and take it from the larger grid, but can also operate completely independently.

Microgrids have been operating for decades, and their ability to function independently has made them an attractive option for institutions – like hospitals and military installations – that could suffer especially grave consequences in the event of a power outage. With more severe weather in the changing-climate forecast, power systems that can be isolated from the larger grid would offer shelter from the storm.

Indeed, Superstorm Sandy, which demolished parts of the mid-Atlantic region in 2012, has been a major factor spurring interest in microgrids among utilities there, according to Burr. Customers and policymakers want a more resilient power supply, and utilities, Burr said, are “at the table.”

Forty-five percent of the survey’s respondents reported that microgrids now are operating in their service area. Of those, 28 percent are owned by the utilities. That’s equal to 16 percent of all the utilities surveyed. Utility Dive characterizes that as “a very high percentage,” and speculates that it might indicate that utilities are experimenting with the technology to get a better handle on how it might operate.

Microgrids offer opportunities to utilities “in the same way that siting renewables offers opportunities,” said Lisa Wood, vice-president of the Edison Foundation and the executive director of the Institute for Electric Innovation. “It can be a way to manage supply and demand.”

In places where the grid is congested, Wood said, a microgrid could decrease demand or provide some additional power supply, providing some needed relief. But utilities would not likely welcome a microgrid at points where the delivery system is not particularly stressed.

As the electrical system planners, Wood said, utilities “want to decide where to put the pieces of the system.”

Burr said the Microgrid Institute is trying to bring utilities into a collaborative effort to bring more microgrids on line.

“If they view it as a threat, their natural reaction is to fight it,” he observed. “So it’s important that solutions address utilities’ concerns.”

Although utilities could build and operate microgrids – and are doing so, most notably in California — microgrids also could be developed and operated by competing power companies, or by customers themselves. That would mean a loss in power sales for the utility.

The Utility Dive survey suggested that utilities might be more interested in developing microgrids given government incentives or rule changes. The majority, 85 percent, said there is currently no incentive for them to develop microgrids. Asked whether they believed their state’s utility regulator should “better incentivize utilities to develop, own and/or operate” microgrids, 86 percent responded affirmatively. Wind and solar technologies have gained a lot of momentum from incentives provided by federal and state governments, as well as utilities.

In addition to financial incentives, the study’s authors pointed out the need to change utility franchise rights. It called them “one of the biggest obstructions to microgrid development.” A microgrid developer would run into franchise issues if it would try to serve multiple buildings on different streets. Microgrids also are generally prohibited from running wires across public rights-of-way.

Connecticut is a notable exception, having revoked the franchise restriction for municipal microgrids.

Among the survey results, stronger support for microgrids was evident among the 56 executives of independent power producers (IPPs). These non-utility power generators have taken on a growing role in power generation over the past couple of decades, and their executives seemed to more enthusiastic than utility executives in their view of microgrid potential.

When asked who should own and operate microgrids, utility executives definitely wanted to keep a hand in. Forty-three percent of them favored a partnership between utilities and private entities. The partnership approach has many backers, according to Utility Dive. Another 33 percent of utility company respondents voted for sole utility ownership of microgrids.

Among the IPP executives, 47 percent favored partnerships, and 40 percent believed that IPPs are best-positioned to own and operate microgrids.

The survey also asked the utility executives how they anticipated that microgrids would impact the demand for their power.

Forty-seven percent said they feared microgrids could displace a significant amount of their current demand. Almost as many – 45 percent – said they expected only a marginal reduction in demand. The other 8 percent said they didn’t anticipate any effect at all.

The utility industry is facing a tidal wave of change, Burr said, and microgrids are part of it. Although not generally quick to embrace change, utilities are beginning to see the potential in microgrids, he said.

“It’s not a negative thing anymore if they can install hardware and earn returns. They’ve come around because it’s a market they understand they can play in.”