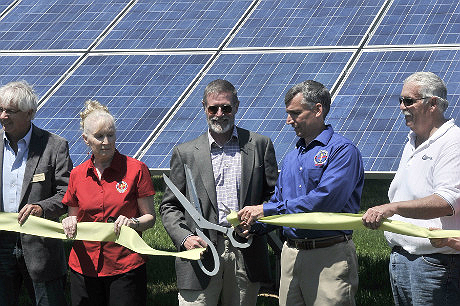 If there’s any indication of agreement among stakeholders after a months-long study to expand solar energy in Michigan, it’s that it could be done through community projects.

That’s one of the take-home messages from the final report of the Michigan Solar Working Group, put together by the Michigan Public Service Commission. It was a months-long process involving clean-energy advocates, solar installers and other experts looking at how Consumers Energy and DTE Energy could expand their solar offerings in the state.

While final comments attached to the report show disputes between the state’s two major investor-owned utilities and advocacy groups over determining a value of solar and whether energy costs would be unfairly shifted among customers under expanded solar programs, the two utilities have indicated plans of launching community-solar projects.

“I was very encouraged to see both companies commented that they will be filing applications to do community-solar programs,” said Julie Baldwin, renewable energy section manager for the MPSC.

Community solar allows utility customers — including those without a suitable location to build their own array — to invest in solar at a more modest cost than an at-home system.

A spokesman for Consumers said the utility expects to submit plans to expand solar to the MPSC by the end of the year. He declined to give specifics at this point, but, “Certainly community solar is something we’re exploring and looking at,” spokesman Brian Wheeler said.

“There’s obviously a lot of interest in solar energy in general. We’ll be looking for ways to offer more possibilities to our customers. The fundamental issue is one of fairness, and that everyone pays their fair share for any source of energy.”

In its comments to the report, Consumers also said it will propose a customer self-generation tariff by the end of the year.

DTE did not respond to requests for comment for this story. In its comments on the reports, the company says it “does not support extending or increasing cross-customer subsidies for solar.”

However: “A potential way to implement an expanded solar program that is accessible to all, avoids cross-subsidization, is sustainable, and would be supported by the Company is to establish a voluntary program.

“The Company would also support and could quickly pilot a voluntary community solar model using one of DTE’s company-owned arrays at full and fair cost, with no subsidies. Customer participation would be open to all, even those who do not own a home. Allowing a utility to control the siting would ensure that the array could integrate with the grid in a way to provides maximum benefit.”

Solar advocates during the working group process recommended the utilities significantly increase the size of their pilot distributed solar programs, particularly due to both programs’ popularity that resulted in a lottery system to participate. The utilities concluded that doing so would result in additional costs to other customers who do not participate. MPSC staff found that expanding the programs could be done without affecting rates.

Ultimately, the final report does not make specific recommendations on how the utilities should move forward.

Community solar could be one avenue to expand the state’s solar portfolio, which advocates say unnecessarily lags behind other Midwest states like Minnesota, Wisconsin, Illinois, Ohio and Indiana.

The state does not have a formal policy on community-solar development. Legislation was introduced in the state House of Representatives in June that would address the topic, but it’s uncertain when the lawmakers will take it up.

Two small projects have been launched by co-operative utilities, and the Lansing Board of Water and Light is in the process of developing what would be the state’s largest community-solar project.

The MPSC examined community models that are utility-owned, third-party or crowd-funded. The final report notes that the utilities “expressed interest in company-owned models in the near term as these will allow for the most expeditious project implementation.”

“In this model, the company is made whole for all of its administration costs, operating and maintenance, taxes, and return on and return of capital investment,” according to the report. “The customer would be able to hedge against future energy price risk by receiving the solar payment schedule upfront and hopefully realize a net bill savings at the end of the lease agreement.”

In other scenarios, a private, third-party developer could build a system and sign up customers. In exchange for managing the system, the utility would make a renewable energy credit payment to the developer or a small up-front or ongoing fee to customers. A third option involves several investors in a “crowd-funded” model.

Brad Klein, senior attorney for the Chicago-based Environmental Law and Policy Center (ELPC), agrees that community solar projects may be the avenue that both sides of the debate can get together on. However, he is concerned that utility-owned projects will not provide the best value for customers.

“We do want to see programs that first offer a variety of options for customers and a true opportunity to benefit from the program and have an investment opportunity in solar,” he said. “We’d be concerned about seeing programs that simply ask customers to volunteer to pay utilities more money for electricity and utilities owning and building their own. The details really do matter.

“Basically asking customers to pay for something the utility owns and keeps the investment return is not the idea of a good partnership or good community-solar program we’d expect to see.”

Klein said there is “incredible demand” among communities across the state for shared solar projects.

“Community solar could be tremendously successful and popular, provided it was really designed as a comprehensive program and not another small pilot project that utilities roll out and control the size of,” he said.

Klein added that while the utilities may recognize value in some form of community solar, they failed to recognize the value of distributed solar generation in their responses to the report.

MPSC staff concluded that while there will be some cost for the utilities to expand programs for residential solar customers, “there may not need to be a rate increase” to do it, Baldwin said.

One way that could be achieved, she added, is with money from renewable energy surcharges already collected on customers’ bills. The ELPC says there’s nearly $50 million between the two utilities that could be used.

“In the case of Consumers and DTE, there may be enough funding in the surcharge collections that have already been made to do at least some type of solar program,” Baldwin said.

Klein added: “The price of solar has fallen so much and there is so much demand out there right now, that both utilities could expand their programs on the order of 50 megawatts or more and be well within the amount of the customer surcharge revenue already collected. It wouldn’t require a single additional dollar of ratepayer money.”

Wheeler, of Consumers Energy, said a “large portion” of surcharges collected till now “is really to pay for the costs of renewable energy we’ve committed to in years going forward. … We collected on the front end, but still have expenses we’re responsible for.”

Another point of contention between solar advocates and the utilities was over determining a value of solar.

“There’s no credible evidence to support DTE’s argument that Michigan-built solar is worth only 28 percent of the value of Minnesota-built solar or that independent NREL researchers somehow overestimated Michigan’s solar value by 350 percent,” he wrote.

While DTE did not respond to a request for an interview, Wheeler, of Consumers, said the goal in determining a value of solar is to keep it as “fair and reasonable” as possible.

“Anytime you increase a value you attach to any part of the mix, there’s an impact on everybody,” he said. “We need to be fair in how we value solar and all forms of energy.”

Klein said their may be some recourse for advocates depending on what the three-member Michigan Public Service Commission orders for Consumers and DTE.

“There is a legal requirement for the utilities to promote and acknowledge diversity in their renewable energy plans,” Klein said. “The Commission over several years has reinforced that requirement. … If nothing changes, I don’t think the Commission is going to be satisfied with the status quo.”

MPSC Chairman John Quackenbush declined to comment on the report’s findings, according to a spokeswoman. The commission plans to issue orders in the future regarding Consumers’ and DTE’s solar plans.

And for Klein, that will be more important than what the companies may plan to do with community solar, hopefully cutting to the heart of the debate around distributed solar. Ultimately, he hopes the Solar Working Group report doesn’t “collect dust on a shelf.”

“While I think finding some common ground or good programs for community solar would be a good first step, it should be in the larger context of moving DTE and Consumers to expand opportunities for all,” Klein said. “This is part of a much larger conversation happening across the country with transitions in the market place to a more distributed utility that provides more options to customers.”