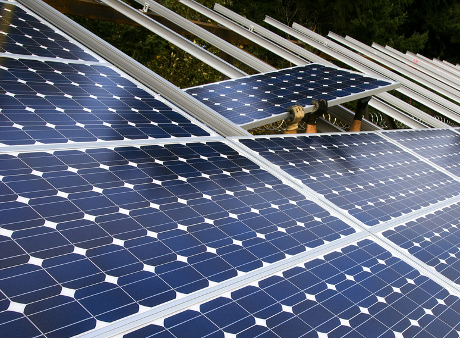 But just how much interest there is in harvesting the sun’s rays from jointly owned solar-electric systems could be dictated by state regulators in a key decision today. [UPDATE: Regulators sided with Xcel Energy in the case, updated story coming later today]

A 2013 law requires Minneapolis-based Xcel Energy Inc. to administer a program for community solar gardens — centralized solar electric systems whose production is shared by people to buy stakes and get a credit on their power bills.

The concept, already in use in Colorado and other Western states, is specifically targeted to renters or condominium owners or others who can’t put solar arrays on rooftops or those who want to tap into the benefits of distributed solar without going all-in for their own rooftop system.

Already, Minnesota Community Solar, a Minneapolis-based company formed to specialize in community solar development, has announced plans for two community solar gardens, including on the roof of a church building on the south side of the city, said David Wakely, the company’s director of communications.

But the company and other solar developers have many other projects in the pipeline that won’t truly take off until they know what rate subscribers will be credited for energy the systems put on the distribution grid.

Xcel originally proposed crediting customers 10 cents a kilowatt-hour for the output from community solar gardens — a rate that developers said was too low to support development.

The Minnesota Public Utilities Commission, which rejected Xcel’s initial community solar garden plan in April, agreed and required the utility to refile its plan. The commission is expected to decide on a fair rate for output from community solar gardens at its meeting tomorrow in St. Paul.

In one way, the case is yet another variation in debates over net metering that are occurring across the country over appropriate compensation for customer-owned solar generation.

But the Minnesota law adds new wrinkles to the discussion because the statute requires the PUC to establish a rate that will “reasonably allow for the creation, financing, and accessibility of community solar gardens.”

Adding even more complexity is another bill passed by the Minnesota Legislature last summer that prompted development of a value of solar rate methodology by the PUC.

Putting a value on solar

Minnesota this spring became the first state in the nation to approve a statewide formula for a value of solar rate, which has yet to be put to use, but could be as part of Xcel’s community solar garden program (EnergyWire, March 11).

But in filings, the utility expressed concern that participation in the community solar garden program is uncapped, and that the value of solar rate “appears to provide an incentive to promote the adoption of solar.”

Solar developers, however, pointed to the PUC’s conclusion in April that a minimum rate of 15 cents is needed to support development and financing of community solar gardens.

The case has drawn the interest of solar developers large and small, and they all agree that whatever rate is decided upon by the commission this week will be pivotal in dictating the success of community solar in Minnesota.

“We have to provide both the subscribers and the people that are going to be financing those subscriptions the return that they expect,” he said.

In comments to the PUC, some solar companies and proponents expressed preference for a value of solar rate — a single rate that takes in all of the benefits and costs associated with distributed solar generation. All of them urged the commission to provide market certainty.

“A clear rate for generation, whether it is the value of solar rate or applicable retail rate, is essential to financing and developing community solar gardens successfully. If investors believe the rate is going to fluctuate, community solar gardens are going to be substantially less attractive to them,” the Interstate Renewable Energy Council said in a June 19 filing.

Meanwhile, the state Department of Commerce’s Division of Energy Resources said the PUC should credit community solar subscribers at a rate of 12 cents per kilowatt-hour plus 2 to 3 cents for solar renewable energy credits, depending on the size of the system, as an incentive to reach the level identified by the commission needed to jump-start development.

For the longer term, a value of solar rate was preferable because it provides more transparency, the department said.

Whatever the outcome, the solar industry says time is of the essence. In the near term, developers and installers face a window to build solar arrays before the end of the 2014 construction season.

An even larger concern is that the clock is ticking on the 30 percent federal production tax credit, which steps down to 10 percent at the end of 2016.

While municipal utilities and electric cooperatives in Minnesota have community solar gardens already in operation, developers see opportunity in Xcel’s service territory and are anxiously awaiting the PUC’s decision.

Wakley said Minnesota Community Solar has announced just two of its projects but has many others in the pipeline. Other developers, too, are discussing plans for projects, some much larger.

Both Minnesota Community Solar projects are about 40 kilowatts with subscriptions available in increments beginning at about 200 watts for just under $1,000.

Even without knowing what rate the PUC will approve, subscribers “are still willing to put in a substantial amount of money for this,” Wakely said.