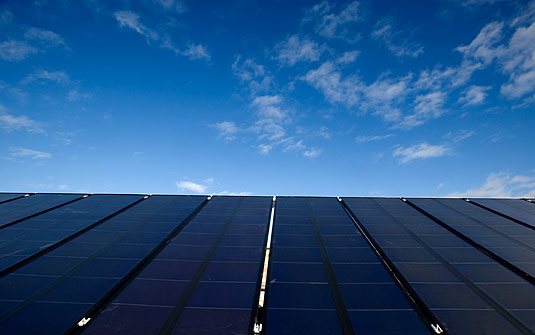 Lansing Board of Water & Light's existing solar array was recently expanded to 158 kW of capacity. The utility is looking to add another 5 MW of solar. (Photo © Dave Trumpie)

A Michigan municipal utility is set to partner with third-party developers to build what could be the largest solar energy project in the state.

Citing decreased costs for solar generation, the Lansing Board of Water and Light says solar can now play a bigger role in the state’s renewable energy portfolio.

A request for proposals is calling for up to five megawatts. Depending on what is proposed by private developers, a single five-megawatt installation would be more than five times bigger than what’s found elsewhere in the state.

“We like solar because it meets the capacity need we have in the summertime,” said George Stojic, the BWL’s executive director of strategic planning and development. “The other thing we’ve witnessed is that those prices for solar have come down significantly. We think it’s getting to a point where it’s not just a renewable that we want to experiment with. This is a resource we can actually use to meet our renewable needs.”

The BWL is Michigan’s largest municipally owned utility. With plans to retire aging coal plants over the next five years, Stojic said the utility will need to make up for the loss in capacity.

“Solar makes a whole lot of sense to meet what we think is going to be a capacity need in the future and to help serve our transmission configuration,” he said.

The project could take various forms, including a community solar model, depending on what is submitted to the BWL. Proposals are due by September.

The BWL will buy the power from the developer, who could then use it to finance the project or return it to members if it’s community-based, Stojic said. The price at which the BWL will buy the electricity will be determined by the proposal process.

Stojic said the project could total more than five megawatts if multiple developers are selected, “Because we would like to see a community-based project out there.”

If the chosen project takes on a community-solar model, “That would be huge, and would represent the largest Michigan solar project to date,” said Tania Howard, renewable energy program coordinator for the Michigan Energy Office (a unit of the Michigan Economic Development Corp.). “But even if the community solar component is only a portion of that, it will still provide a valuable option that hasn’t existed for Lansing’s residents before.”

Howard said the largest solar project in Michigan is owned by DTE Energy, which owns a 3,000-panel, 818-kilowatt array in southeast Michigan. A recent report by staff at the Michigan Public Service Commission estimates 22.6 megawatts of solar was installed throughout the state, either by utility customers or by utilities themselves, at the end of 2013. (That includes two installations by the BWL that total 553 kilowatts.)

The BWL project “is a big addition, especially in relation to the size of the utility,” said Douglas Jester, a consultant with Lansing-based 5 Lakes Energy. “Five megawatts from the Lansing Board of Water and Light is a significant step and I appreciate them doing it.”

Jester does not plan to submit a proposal for the BWL, but he said he has heard from developers seeking his advice. He said he was “a little bit surprised” at the capacity the BWL proposed, which exceeded his expectations.

Jim Weeks, executive director of the Michigan Municipal Electric Association, said decreasing installation costs will likely lead to a rise in these types of projects across the state.

Until now, the major investor-owned utilities have been hesitant about expanding their solar programs, suggesting that the costs of doing so would be borne by customers who do not participate.

“If the technology keeps driving the price of solar lower, from a value perspective, solar is going to be something I’d expect all utilities to take a very good look at,” Weeks said. “I can see solar playing a larger role going forward, for sure.”

While there are only two community solar projects operating in the state, Howard said interest is building. The city of East Lansing, which is in the BWL’s service area, showed strong interest in a recent survey about customers’ willingness to invest in a community solar project. On the west side of the state, the municipally owned Grand Haven Light and Power is also considering a project.

For now, though, the BWL may be planting the seeds for utilities’ emergence into the solar energy market on a large scale.

“This will give area residents another option to support locally-produced renewable energy, which I think there is a growing demand for, and will set an example for other municipal utilities to potentially follow,” said Howard, of the Michigan Energy Office. “Anything we can do to support the solar industry will be good for bringing and maintaining the local, well-paying jobs that support it.”