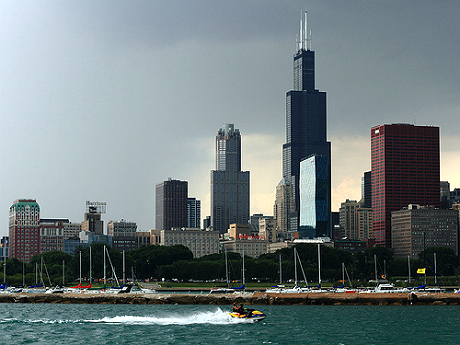 (Photo by ed_needs_a_bicycle via Creative Commons)

As Chicago clamors to be known as the country’s most sustainable city – promoting solar installations, electric vehicles and energy efficiency – the City Council has been considering an ordinance that would mandate most gas stations offer gasoline blended with 15 percent ethanol, or E15.

The ordinance was framed as a step to reduce greenhouse gas emissions and promote cleaner energy, and was seen as potentially sparking other such municipal mandates nationwide. It is sponsored by Alderman Edward Burke, who has pushed clean-air measures including the original ordinance to close the city’s coal-fired power plants and a smoking ban.

The E15 ordinance has strong backing from farmers, part of an Illinois ethanol industry reported as creating 73,156 jobs and $17.5 billion in economic activity annually. It is backed by the American Lung Association. And it also is meant to provide relief from city gas prices identified in June as the highest in the nation — E15 blends are typically cheaper 5 to 15 cents per gallon cheaper than conventional 87 or 89 octane gasoline.

The measure might seem innocuous – most gas stations already offer 10 percent ethanol blends because of federal mandates, and conventional gas would continue to be readily available under the ordinance. But it has drawn strident opposition from forces including the oil industry and also the Midwestern marine industry, which sells and repairs boats for use on Lake Michigan, the Chicago River and other local waterways and lakes.

Dead in the water?

On July 28, after a five-hour committee hearing, the Chicago City Council decided not to advance the E15 ordinance. An attorney in Burke’s office said the ordinance is still “alive” and another committee hearing is likely in September or October. Michael Frohlich, spokesman for the ethanol advocacy group Growth Energy which backs the ordinance, said it is “moving forward.”

The boating industry is continuing to push hard against the ordinance, which they say would result in unintended damage and invalidated warranties for some of the city’s 13,000 boats, while laying the groundwork for similar ordinances nationwide.

“The decision not to vote on the issue in Chicago this week was a victory for the marine industry, but we aren’t in the clear–not by a long shot,” said Lee Gordon, spokesman for Mercury Marine, an outboard motor manufacturer in Wisconsin. “We don’t know when the issue will come up again, but we all have to be ready to fight against it.”

A high-profile supporter of the ordinance has been former U.S. General Wesley Clark, now board chairman of Growth Energy. The news website DNAInfo.com quoted Clark saying E15 is “good for the economy, it’s good for the environment, and it’s good for national security.”

Higher-ethanol blend gas can damage engines of boats, motorcycles, lawn mowers and other small engines. E15 is generally only approved for cars from 2001 or later, and cars with flex-fuel engines.

Representatives of the boating industry say that especially since E15 is significantly cheaper, many boat owners would likely fill their engines with it despite or without seeing warnings posted on the pump.

About 90 percent of the boats that Chicagoans use on Lake Michigan and local rivers are small craft transported on trailers rather than stored in marinas, so most boaters fill up at regular gas stations. Mercury Marine president of global sales and marketing Kevin Grodzki said that at his home near Fox Lake in northern Illinois, he regularly sees boat owners mistakenly fill up or start to at an E15 pump. He says that it’s easy to miss the “business card-size” warning about E15 use.

“Think about how many signs there are on the gas pump,” he said. “Everything from the 89 cent coffee, the dollar hotdog, by the way did you decide you want a car wash. Nobody pays attention [to the warning].”

Ethanol can be more corrosive and burns hotter than gasoline, so the higher ethanol blend can damage gaskets, valves and seals in engines not built to handle it. Warranties for boat engines typically are invalidated if E15 gas is used, according to David Dickerson, director of state government relations for the National Marine Manufacturers Association.

“If you fill up with E15 your boat engine will run rough, it’s going to be hard to start, and to restart, if you are out on the water and kill the engine,” Dickerson said. “Those are significant when you’re boating rather than driving. Being caught out on the water with no engine can be very dangerous, not just annoying.”

Dickerson said that E15 is especially a problem when boats sit for long periods of time without being used, since the higher ethanol blends are more likely to separate into ethanol, gasoline and water sitting over time. This is not typically a problem with cars or other engines that go through their fuel tanks more quickly.

There are fuel stabilizers which can be added to a gas tank to mitigate this issue. But Grodzki said this is not a good option for many boaters, especially when they are topping off a tank that has sat partially full for a while.

“Fuel stabilizers say put this in a full tank and it will be fine,” he said. “That won’t work in the majority of cases because the fuel has changed chemistry because of exposure to the elements. And it’s a pretty expensive solution.”

Marine industry representatives are also worried about pump setups where E10 and E15 are delivered through the same hose, with the customer pushing a button to choose their blend. Since several gallons of gas could be in the hose, Dickerson said, even boaters who select E10 could get some E15 in their tank.

“I have a sailboat with a little engine of only three gallons,” he said. “If the prior customer was running E15, there’s really nothing I can do –I could push exactly the right button and [still] fill that tank with E15.”

Frohlich said concerns are overblown, and that the ordinance would be a good move.

“This is just one more option for drivers who want a higher octane, higher performance fuel that also costs less, is better for the environment and creates jobs in Illinois,” he said.