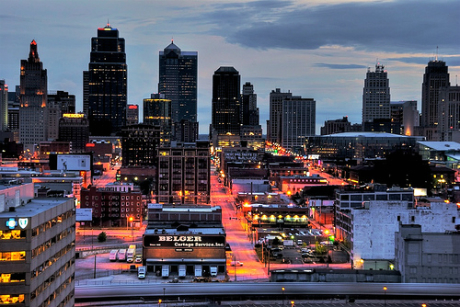 Kansas City is the largest municipality in Missouri's PACE district, the smallest is a town of 430. (Photo by Jim Nix via Creative Commons)

Four years after Missouri passed a law allowing Property-Assessed Clean Energy (PACE), the state is on the verge of launching the first few projects.

“It’s been a long birthing process,” said Nathan Nickolaus, who is on the board of directors of the Missouri Clean Energy District, which administers the program.

As in many of the 31 states that have passed PACE laws allowing municipalities to create a PACE lending program for clean-energy projects, cities in Missouri concluded that they weren’t up to the task of creating a PACE program. Only 25 of those states actually have lending programs in place.

One regional government entity in Missouri considered developing a PACE program, then abandoned the idea because it would have to hire a dedicated staff member to get it done. The city of Springfield also looked into it, but local officials “didn’t feel they had the staff,” according to David Pickerill, executive director of the Missouri Clean Energy District. “It turned out it had to be statewide.”

“One municipality had to get the ball rolling,” Pickerill said, and that turned out to be the state capitol, Jefferson City, a community with a history of green initiatives.

The PACE bill had just passed and former Jefferson City Mayor John Landwehr “felt very strongly they needed a city to start it, and that Jeff City should be that city,” said Nickolaus, who was a member of the city staff at the time. “He volunteered the city to do it.”

In 2011, Jefferson City’s mayor and council appointed a board of directors and recruited two volunteer staffers – Pickerill and his colleague John Harris – to map out the system.

“It’s taken a lot of time. There’s a lot of legal work that has to be done,” Pickerill said. He estimates that the District has spent about $200,000 on lawyers’ services.

“And getting municipalities takes a lot of time. Someone has to go before the city council and make the case. You have to look them in the face and tell them it’s not an administrative burden, and it won’t affect their credit rating. That takes time.”

“They want to know, ‘Who in our community wants this? Let us know when you have someone.’“

In fact, Pickerill said he usually he visits a city council after someone in the community has contacted him to ask him to do that.

Once the elected officials of a city or county have passed an ordinance joining PACE, they needn’t do anything else – except send along applications from interested businesses. The PACE program does all the rest: ensuring that programs meet provisions of the state law as well as lending requirements, determining whether applicants have enough equity in their projects, calculating how big the special tax assessment must be to cover the cost of the project.

About 30 Missouri cities and counties so far have joined PACE, and “We want more municipalities to join us,” Pickerill said.

The largest of them is Kansas City; the smallest, a community of 430 people.

“They have a project in mind,” Pickerill said, “but they couldn’t have done it on their own.”

As the Jefferson City project got underway, it became apparent that two partners from St. Louis had a different vision from Pickerill and Harris, so the St. Louis team parted ways and created their own local program in St. Louis, called Set the PACE.

Pickerill, who so far is working without pay for the statewide PACE organization, thinks there’s sufficient support for the new financing mechanism.

“I think it’s going to work out just fine,” he said. He hopes that at some point, it will generate enough in fees to pay some staff salaries.

The projects now nearing approval are a varied lot, including energy improvements to a condominium development in Kansas City. A couple of cities are seeking funds to install new technology at their wastewater lagoons that would eliminate the need to aerate their waste ponds, a process that consumes a lot of power, according to Pickerill.

And then there’s a large corporate-owned hog facility, which is seeking PACE funds to install a system to convert the abundant methane gas produced by hogs into compressed natural gas that could be shipped.

Because methane’s greenhouse potency over a 100-year period is about 20 times that of carbon dioxide, Pickerill said, “capturing it is very important to the environment.”

Although the engineering is requiring “quite a bit of time,” he said, “We expect it to get funded this year.”

He said about $100 million worth of projects are in the District pipeline.

Missouri’s PACE project offers two types of financing: for projects with budgets under $500,000, Pickerill said he will tap traditional lenders such as banks. Larger projects will be financed through individual bond issues.

Nickolaus, who is on the PACE board in Missouri, said he talks up the program and generally finds that his audience, while very interested, knows nothing about PACE funding for energy improvements.

Once projects start to take shape and the word gets out, he said, “I really think it will skyrocket.”