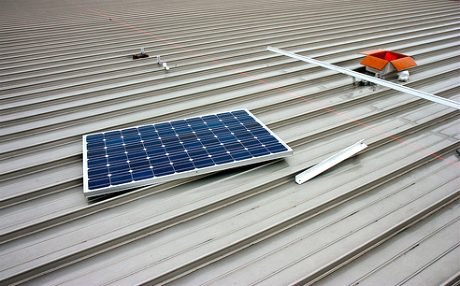 A closely watched battle over utility policy in Wisconsin could determine the fate of solar development throughout the region, advocates say.

The dispute is over three major rate cases recently filed by We Energies, Madison Gas & Electric and Wisconsin Public Service Corporation. The three utilities cover much of the eastern half of the state as well as its largest cities.

If the state Public Service Commission (PSC) approves the cases, solar experts say there will be a massive chill over solar development in these utilities’ service territories. And they expect other utilities in Wisconsin and beyond will file similar requests.

All three cases would significantly restructure the way residential and business customers are charged for electricity, so that all customers pay a higher fixed amount each month while the variable charges based on electricity use are reduced.

This creates an inherent disincentive to reduce energy use – whether through installing solar panels or increasing energy efficiency. RENEW Wisconsin program and policy director Michael Vickerman described it as a “reverse Robin Hood” move that shifts the burden of paying for electricity from large energy consumers to small consumers.

The We Energies case, which advocates find the most objectionable, also changes the terms of net metering so it would be far less beneficial financially to send energy back to the grid.

We Energies also wants to impose an additional monthly charge on distributed energy installations, and would prohibit solar installations owned by a third party from interconnecting to the grid. Since a majority of residents installing solar nationwide now use such third party financing and ownership arrangements to make solar affordable, this could be a death knell for residential solar in Wisconsin.

Some solar advocates fear the ripple effects could also be felt in other states. We Energies’ parent company is in the midst of acquiring Integrys in a $9.1 billion merger. That means its solar plans could have direct and indirect influence on utilities around the country.

“These proposals are designed to do one thing – eliminate solar and stop competition,” said Bryan Miller, executive director of The Alliance for Solar Choice (TASC), a coalition of rooftop solar companies. “These are being pushed in a state that has very little solar. It is the ultimate swatting a fly with a nuclear weapon.”

The Federal Energy Regulatory Commission and state regulators in Illinois, Michigan, Minnesota and Wisconsin will need to approve the merger. Solar advocates hope regulators will take the rate case into consideration as they make their decisions.

Spokespeople for We Energies and WPS said the restructuring is an overdue and necessary way to more accurately reflect the costs of delivering electricity. They say that customers who generate energy onsite are essentially getting the benefit of the grid when they need it but aren’t paying their fair share to keep that infrastructure in place.

“We want to make sure the costs for maintaining our electric system are shared in a fair manner, that is more representative of where those costs lie,” said We Energies spokesman Brian Manthey.

“The actual fixed cost for meters, poles and wires are things that really don’t vary from customer to customer – they are just as much for a customer using a small amount of electricity as a customer who uses a lot of energy,” Manthey said. “But they’re being picked up by the other customers who can’t afford renewable energy systems or don’t want them.”

Nationwide, clean-energy advocates say that utilities fear a fundamental shift in the energy landscape wherein the rise of solar and distributed generation greatly reduces demand for their services and slashes into their profit margins and their ability to pay for infrastructure.

But in Wisconsin, the amount of distributed solar energy is still “infinitesimally small,” in Vickerman’s words, between 3 and 8 MW in each service territory. So, advocates say, concerns about the grid falling into disrepair ring hollow.

“That is pure poppycock,” said Vickerman. “All three utilities are financially healthy, they are bringing in revenue to cover expenses and earn returns for shareholders. It’s not as if they are losing money and ailing. They are doing just fine.”

“It’s early in Wisconsin but you can see where it’s going,” countered WPS spokesman Kerry Spees. “The way we’re collecting those costs right now is not going to be viable for the long term as people use less, whether because of distributed generation or energy efficiency.”

In a regulated state like Wisconsin, where the same companies generate and distribute electricity, utilities can also try to recoup sunken costs from building power plants through their electricity charges. Vickerman thinks that’s part of the motivation for the rate changes.

We Energies wants to create a new fixed monthly charge for distributed generation based on capacity: $3.79/kW for solar and wind generators and $8.60/kW for baseload generators, like biogas operations at dairy farms or even the Milwaukee Metropolitan Sewerage District, which generates electricity from landfill and sewage operations.

The new charge would apply to any new customers starting in 2016 and also to existing customers who don’t have a power purchase agreement to sell their electricity back to the utility. The new charge could reduce returns by nearly 30 percent, according to analysis by RENEW Wisconsin.

Meanwhile We Energies would also cut by more than half the amount paid for bioenergy derived from manure or food waste processed into methane in digesters, a growing movement in Wisconsin. The rate per kWh would go from 9.2 to 4.2 cents.

The WPS case would raise fixed costs from $10 a month to $25 for residential customers and $35 for business customers. Meanwhile it would lower the charge for amount of electricity used from 11.3 cents/kWh down to 10.1 cents/kWh.

A chart prepared by RENEW Wisconsin shows that the three utilities’ planned fixed charges are significantly higher than other major utilities in the state, with WPS by far the highest.

The proposed cost restructuring means that it will take solar customers much longer to recoup the cost of their installation through savings on energy bills. Meanwhile a rate change also creates uncertainty, according to Vickerman, wherein customers will expect that rates could keep changing and make it impossible to predict the economics of solar or get financing for an installation.

The change in net metering in We Energies case would mean a loss of about 28 percent, or $22.75 a month, for a 6kW installation, according to RENEW’s calculations. The rate case proposes changing how net metering is calculated, and also reducing the rates paid to customers for electricity they generate – treating it as cheaper wholesale rather than retail rate electricity.

Matt Neumann is owner of SunVest Solar, Wisconsin’s largest solar installer, founded in 2009. If the We Energies case is approved, he predicts solar installations plummeting and significant layoffs at his and other companies.

““It would be devastating – it would end the economic argument to install solar at all,” he said. “The number one item everyone wants to know is how long is the payback? [Under the proposed rates] there’s not going to be economic justification for doing it, which would basically kill the industry.”

Currently Wisconsin’s electricity interconnection rule does not take any stand on third-party ownership — where an entity other than the utility or the customer can own the solar array — though the PSC has issued non-binding letters indicating resistance toward third-party financing.

Efforts to allow third-party ownership, including a recent proposal that drew support from the state’s Libertarian Party, have stalled in the legislature.

In July, the Iowa State Supreme Court supported the concept of third party ownership in its decision on the Eagle Point Solar case. While that case doesn’t have any official bearing on the Wisconsin commission’s decision, advocates say it should be taken into consideration.

Manthey said We Energies is just clarifying what the company views as the state’s existing position on third-party leasing.

“At this point it is the interpretation of state law that third-party generation is not something that can be done,” he said.

The City of Milwaukee is promoting solar energy as a key plank of its new sustainability program. Amy Heart is solar program manager for the city’s sustainability office, which runs the solar initiative Milwaukee Shines. She said that city efforts yielded 30 new installations in 2013 and that number has already been topped for 2014.

Because of uncertainty over the PSC’s stance on third-party ownership, she said the city has found other ways to fund solar installations. A city program with a credit union provides low-interest loans for the upfront costs, and the city also administers a bulk buy program allowing customers to get installations at a discount.

While We Energies’ prohibition on third-party ownership would not apply to these installations, Heart is very concerned about the implications if We Energies is allowed to basically enshrine a ban on third-party ownership. She said city officials are also worried about other provisions of We Energies’ rate case and feel it could torpedo key goals of the sustainability plan, including increased energy efficiency and solar and wind installations on city property.

“The third-party limitation has already limited who moves forward with solar in the state,” Heart said. “The fact that it’s a gray area has already limited many people, including the city of Milwaukee from getting solar. Our concern is that barrier will continue to be a problem if this case goes through.”

Environmental and clean energy groups including RENEW Wisconsin, the city of Milwaukee and the Milwaukee Metropolitan Sewerage District are intervenors in the rate cases. That means they have legal standing as parties in the case and they will participate in the legal proceedings, which include calling witnesses and cross-examination.

We Energies had filed a motion to prevent the Environmental Law & Policy Center (ELPC) and TASC from being intervenors in the case, arguing that they had no local standing. But under public pressure that request was withdrawn.

Crowds are expected at the rate case hearings, a change for the usually arcane affairs that draw little public interest. A Credo petition calling on the utilities to withdraw their proposals drew almost 3,000 signatures within a few days of posting.

Arthur Harrington specializes in renewable energy and teaches an energy law course at Marquette University. He is installing solar he purchased through Milwaukee’s bulk buy program. He is disturbed by We Energies’ proposals, and also by the polarization of the debate.

“I really understand and appreciate We Energies’ need for a reasonable contribution of fixed capital for solar,” he said. “But it shouldn’t be so high as to discourage investment by homeowners. And there’s the whole issue of transparency.

“I think the current rate case provides an interesting opportunity for We Energies to engage in some creative solutions that are good for the environment and the ratepayer and send some positive signals in a baseload system that is heavily invested in coal.”

RENEW Wisconsin and the ELPC are members of RE-AMP, which publishes Midwest Energy News.