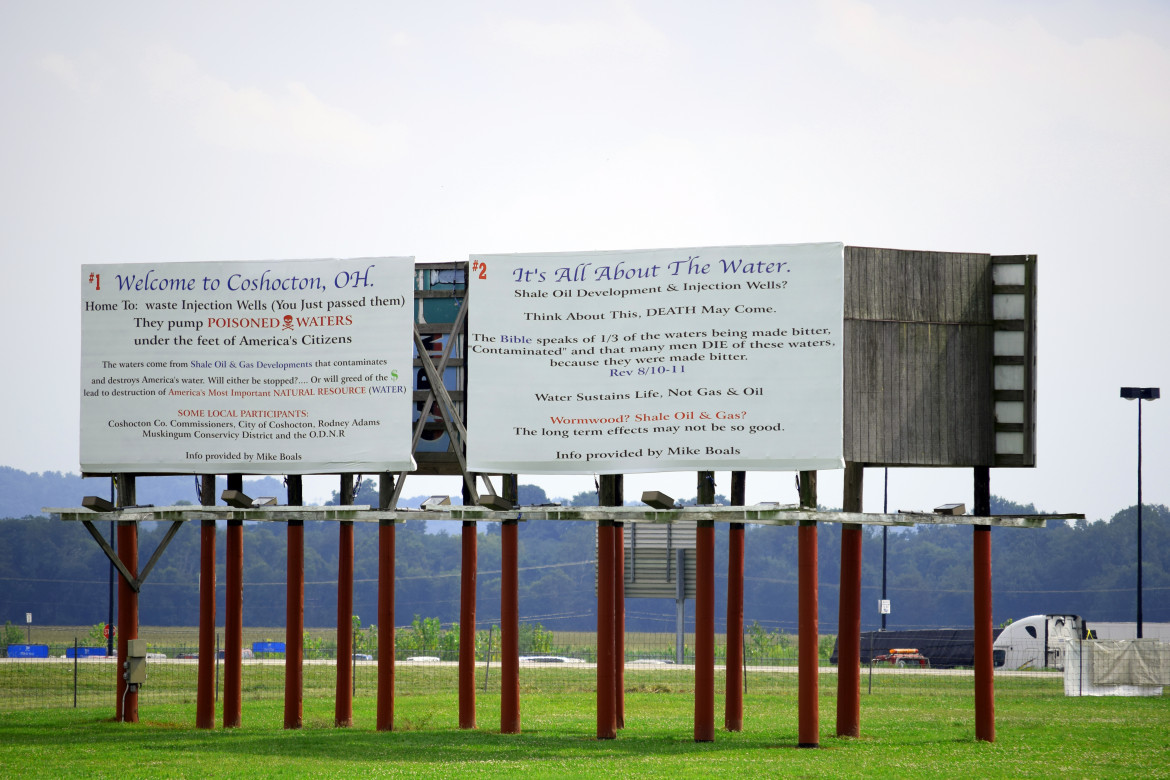 These billboards are at the center of an Ohio lawsuit against a local man who opposes fracking and related activities.

A lawsuit filed by an Ohio company last month seeks to remove two anti-fracking billboards near a wastewater site it operates.

While the case is a test of free speech, critics say it also reflects a broader reluctance for businesses and regulatory agencies in the state to adequately inform citizens about shale gas activities and address their concerns.

Fracking is the use of chemically treated water and sand to crack and prop open rock so oil and gas can flow out. Fracking a horizontal shale well can take millions of gallons of water. In Ohio, most of the wastewater that can’t be reused goes into underground injection wells.

Ohio’s regulatory environment is allowing rapid expansion of the shale gas industry. The state’s natural gas production nearly doubled from 2012 to 2013. And shale wastewater injection for 2013 was up more than 2 million barrels from the previous year.

Critics say the system fast-tracks permits for activities related to shale gas at the expense of public comment and citizen input.

Growth in the industry is “happening in a way that communities are not necessarily always well-informed,” said Megan Lovett, a lawyer with Fair Shake Environmental Legal Services in Pittsburgh.

Lovett believes that situation makes it even more important to defend concerned citizens’ right to speak out. Her firm is currently consulting with defense counsel in the Ohio lawsuit.

The wells dispose of wastewater from fracked wells in Ohio and from out of state. That type of wastewater typically has high levels of salt and can also contain heavy metals and dissolved radioactive materials, such as radium.

One billboard says in part that the nearby injection wells “pump POISONED WATERS under the feet of America’s Citizens. The waters come from Shale Oil and Gas development that contaminates and destroys America’s water.” The sign’s list of local participants names Adams and groups of government officials.

The other billboard includes a statement that “DEATH may come,” followed by references from the Book of Revelations.

The plaintiffs want the state court to order Boals to remove the billboards and not to make “any false statement of fact or statements that imply false statements of fact, publicly or to any person….” They also ask for an unstated amount of money, punitive damages and attorney’s fees.

The complaint claims Boals’ behavior in putting up the billboards amounts to defamation, wrongful interference with contractual relations, business disparagement, invasion of privacy, and intentional infliction of emotional distress.

“We think that these claims are totally baseless, and they’re just an intent to bully him,” Lovett said.

Limits on speaking out

Worries about bullying have popped up elsewhere in Ohio too.

This summer, Caitlin Johnson of the Ohio Organizing Collaborative has been working on a “listening project” in rural Ohio. The survey’s goal is to learn about people’s concerns about shale gas activities in their communities.

Many residents would only speak on condition of anonymity, Johnson said in June when she met with journalists in Carroll County, Ohio. The meeting was part of a Shale Country Institute organized by the Institute for Journalism & Natural Resources.

Many people were “so scared” of possible reprisals if they spoke out publicly against changes that many businesses and local government officials welcomed, Johnson noted.

“People are being bullied,” she said.

Many people who did answer her survey worried about the social impacts of shale gas activities, Johnson said. They saw the rural, close-knit nature of their communities changing with heavy traffic and a flood of outsiders working in the industry. Rents and prices at grocery stores seemed to be “way up.”

Along those lines, Boals said there is now an “extreme amount of tanker trucks you see on the highway streaming into Coshocton.”

“It would be really unfortunate if this [lawsuit] would deter more concerned people from speaking out,” Johnson said earlier this week.

Actions by the Ohio Department of Natural Resources (ODNR) have also thwarted citizens’ attempts to speak out against fracking and related activities, Johnson said. ODNR staffers showed up with at least 14 armed personnel and a dog at one 2013 meeting in Portage County.

Even when citizens can submit written comments, the usual 15-day comment period is too short, said Brian Kunkemoeller of the Sierra Club’s Beyond Natural Gas program.

“This is simply not enough time here for the community to become aware, get educated, and get involved,” Kunkemoeller noted.

Nor does the Ohio Oil & Gas Commission let citizens appeal from the grant of an injection well permit, he added.

“Quite frankly, citizens have no meaningful venues for objecting to frack waste disposal, nor do most of them have real opportunities to know these things are happening in their community,” Kunkemoeller said.

A public relations spokesperson for Buckeye Brine declined to comment on the specifics of the lawsuit. “We’re just letting the complaint speak for itself,” said Jen Detwiler of Steiner Public Relations in Columbus, Ohio. The company has not had any shutdowns, spills or enforcement problems in Ohio, she noted.

The complaint alleges that the billboards’ false statements “include claims that Plaintiffs have ‘contaminate[d] and destroy[ed]’ the water supply, that Plaintiffs’ injection well-related activities ‘pump poisoned waters’ and that they lead to ‘DEATH,’ all of which is patently false.”

“What I expressed is what I know is true,” Boals said.

“I put it up in plain simple words that an injection well pump contaminated waters under the feet of Americans,” Boals said. The contamination is the whole reason for pumping it deep into the ground, he added.

Fracking operations do contaminate water, Boals said, whether waste enters the drinking water aquifer or not. Even if fluids don’t leak into drinking water, the process of preparing and using fracking fluids depletes fresh water, he said.

“Unless they do not use any fresh water in the process, they can’t say that they’ve not contaminated water,” Boals said.

The Coshocton site is “probably the most sophisticated injection well we have in Ohio,” said Mike Chadsey, a spokesperson for the Ohio Oil & Gas Association (OOGA). Buckeye Brine is an OOGA member.

“Free speech is important,” Chadsey acknowledged. But, he said, “You still can’t yell fire in a crowded theatre.”

“It’s a pending lawsuit, so we’ll see what the court says,” Chadsey added.

Boals is “not saying anything that’s not true,” stressed Lovett. She believes that the statements are protected free speech under the First Amendment.

To the extent the signs express Boals’ opinion or religious beliefs, those are protected speech too, she noted.

“When something is happening in the community, you should be allowed to speak about it—plain and simple,” Lovett said.

UPDATE, August 26, 2014:
Even without a court order, it appears Bolls’ billboard signs will be coming down. Bolls says the owner of the billboards has given him until September 9 to remove the billboards, after reported pressure from legal counsel for Buckeye Brine. More detail can be found HERE.