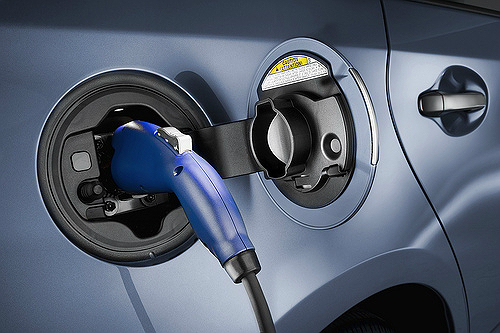 Electric cars may still be somewhat of a novelty in the U.S., but employers across the country are beginning to install charging infrastructure at the office as a perk for workers with electricity-fueled transportation.

The charging stations are also seen by electric vehicle advocates as a way to encourage other drivers to make the switch from gasoline.

Drive Electric Ohio is an initiative helmed by nonprofit Clean Fuels Ohio to keep the state at the forefront of this technology as more electric cars roll off assembly lines at lower price points.

While progress is slow, Ohio companies are open to putting workplace charging stations on site, noted Cynthia Maves, director of grant administration for Clean Fuels Ohio and manager of its Drive Electric program.

A handful of Ohio companies, among them Verizon, FirstEnergy and the Cleveland Clinic, have installed workplace charging since the initiative began in 2011. Other than a car owner’s garage, workplace stations are the next most likely place a vehicle will spend time parked, potentially doubling its all-electric daily commuting range.

Overall, the state has 171 charging stations in place.

Plug-in electric vehicles represent less than 1 percent of total U.S. vehicle sales, although those sales nearly doubled in 2013. According to researchers at The Ohio State University, fewer than 3,000 electric or plug-in automobiles were purchased in Ohio during the last two years.

Still, the Drive Electric program is laying the groundwork for an inevitable influx of PEVs as automakers put more of the cars on the market, said Maves. Ride-and-drive sessions, for example, allow company officials and workers to test out electric cars supplied by participating dealerships, with the goal of educating employers about the vehicles.

“The best way to get people involved is to put them behind the wheel,” said Maves.

Drive Electric has been bringing Ohio companies into the electric-powered fold at a gradual pace. The cost of installing a charger can range from $4,000 to as much a $15,000, depending on how much conduit needs to be laid between the charge point and an electrical source. In the past, Clean Fuels Ohio used grant money from the American Recovery and Reinvestment Act to help defray the cost of some office charging stations, but that funding has run out.

Charging units take between four to eight hours to fully infuse an electric car’s battery. As most Ohioans commute to and from work less than 20 miles a day, a workplace charger is more than viable, Maves said.

The Electric Power Research Institute estimated that 54 percent of non-residential parking occurs at the office, where long layovers are commonplace. Workplace charging can provide PEV owners an extra 15 to 70 miles of range.

Lower emissions and reduced dependence on oil are great reasons to go all in on electric cars, said Maves, and an environmentally sound mindset built around charging units can directly benefit Ohio employers by attracting young talent that want to work in a progressive, tech-savvy atmosphere.

For example, Melink Corporation, an energy solutions firm near Cincinnati, offers its employees $5,000 to purchase a hybrid or electric vehicle.

Dayton-based custom book maker BookFactory has two charging stations on site; one a Level 2 charger (levels represent the speed of the charge) that any electric vehicle can use, the other a high-powered Level 3 unit that company president and co-founder Andrew Gilmore plugs his Tesla Model S into.

The chargers, installed over a year ago, are used by three of BookFactory’s 31 employees. The stations are also open to the public.

“We have people pulling off the interstate to charge up,” said Gilmore.

The company began to research workplace charging in the late 2000s, when gas prices were climbing above four dollars in some parts of the country. BookFactory gave workers a $50 stipend to help defray fuel costs, while management starting buying hybrids and electric vehicles as an example for the rest of the company.

“We cut those (gas money) checks for a problem that was going to come back,” Gilmore said. “Electric charging is a change to benefit the environment and our employees.”

The company president understands the sticker-shock of plug-in electric vehicles. Among the less expensive PEVs is the Nissan Leaf, which costs about $30,000, though federal tax credits can lower the price by $2,500 to $7,500 depending on the vehicle’s battery capacity. However, the savings on fuel can make up for the initial price point, said Gilmore, who saved $4,000 last year on gas.

For BookFactory, the extra electricity cost involved with the charging stations is so minimal the company does not bother to track it. Gilmore believes his company can be a benchmark for other businesses on the fence about workplace charging.

“We are a small company that made a targeted investment,” he said. “If we can do it, anyone can.”

With its limited budget, Clean Fuels Ohio cannot reach a wide range of companies to sing the praises of workplace charging stations. Instead, the Drive Electric program is aimed at businesses that have expressed an interest in the technology or whose philosophy aligns with environmental tenets.

Initiative manager Maves recently gave a presentation to the Ohio Hospital Association, as healthcare is a naturally forward-thinking industry, she said.

Ohio does give financial assistance to businesses and organizations for the purchase and installation of alternative fuel distribution facilities and terminals, but other states have more robust programming aimed at promoting workplace charging, Woodrum maintained.

“Even putting $1,000 toward charging stations would help,” said Maves. “We’re not seeing that kind of support in Ohio.”

The well-attended Drive Electric workshop in April shows that Ohio employers are at least interested in keeping a “green image” through sustainable transportation options.