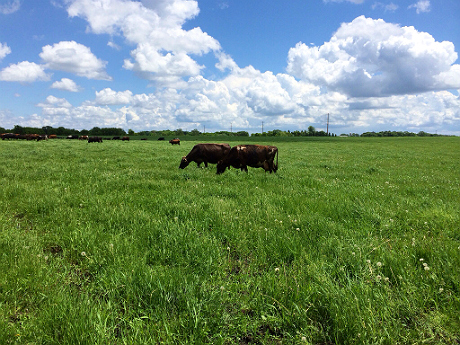 While science has all but ruled out the most persistent health claims about transmission projects, high-voltage lines are still perceived by many as posing a risk to humans and livestock.

And in a recent Minnesota case testing the state’s Buy the Farm law, that perception — rather than the science — was the deciding factor.

A Scott County judge ruled last week that utilities in the CapX2020 project have to buy the Cedar Summit Farm based on “subjective concerns” about the power line’s impact. Cedar Summit is a grass-fed, organic dairy operation — the only 100 percent grass-fed creamery in the state — and its products are sought-after for their high quality.

Minnesota’s unique statute requires utilities to buy entire properties if they’ll be negatively impacted by a transmission project. Cedar Summit’s owners, David and Florence Minar, had argued that the CapX2020 project would have a potential adverse effect on milk production as well as damage the farm’s pastoral, rural image.

But for District Judge Caroline Lennon, the latter argument was what mattered.

Judge Lennon wrote in her ruling she would disregard the testimony of two experts who said high voltage lines would have little impact on livestock, basing the decision instead on “the perception and sensitivity of [Cedar Summit’s] customer base” to the presence of the transmission line.

“The judge said Minnesota law doesn’t require a farmer or citizen to prove ahead of time that they or their cattle will be ill,” she said.

David Minar said he still believes that cows raised near electric power lines may have problems but he was just as worried about the pristine image of the farm being destroyed by the line. The farm receives roughly 10 percent of its income from events such as Milkapalooza and the Eat Local Farm Tour, he said.

The presence of power lines could cut into that booming part of the business and hurt the marketing of its products, said Minar. Future photographs of the farm would invariably include the power lines, which could hurt business, he said.

‘Arguments on both sides’

As Midwest Energy News has previously reported, decades of research has failed to show power lines pose a threat to livestock. Maccabee also noted that the line would not impact the farm’s organic certification.

Still, Maccabee remains unconvinced about the risks. “There are arguments on both sides,” she said.

The judge accepted that the Minars made a reasonable decision in invoking the Buy the Farm statue, Maccabee said, especially considering the organic marketplace.

“That market is sensitive to this kind of impact,” she said. “The judge said their concerns were absolutely reasonable and she didn’t have to decide the case on other facts.”

Ryan Crum, Cedar Summit’s business development and marketing manager,  said in his testimony before the judge that “perception is greater than reality for our customers, and whether or not these experts can come and say it’s not going to have an effect on anything…our customers believe it will.”

The Minars’ son, Chris, said he no longer has plans to buy the farm from his parents because of the power line.

Elizabeth McCann, the consumer affairs manager of Mississippi Market in St. Paul, conceded in testimony that the brand has remained its top-selling milk despite the controversy. Still, she said some customers would be “shocked” to see a photograph of the farm with the power lines in it.

Science did play a role, at least, for David Minar after he heard testimony from a friend who said a power line on his property led to declining production of his dairy herd.

“I’m not disputing the science but I just know what my friend said and all the issues he had because of it,” he said.

‘We don’t know what the future is’

The decision was “bittersweet because we’ve been here so long,” Florence Minar said.  Finding the same quality and quantity of farmland will be extremely difficult, if not impossible, she said.

Lori Buffington, a spokeswoman for CapX2020, said the utility is “reviewing the order and considering next steps.”

Johnathan Hladik, a senior policy advocate for the Center for Rural Affairs who closely follows transmission line issues, said he was not surprised the Minars won the case based on the way the Minnesota law works.

“I don’t know any other way it could be decided,” he said.

Health concerns are raised in many environmental projects, from wind turbines to power lines. Opponents can usually find “fringe” science to support their side and instill fear in the public, he said.

However, “there are now many examples of communities and transmission developers working together more, we’re seeing the tide turn,” he said. “They’re finding solutions that work for all the parties involved.”

For the Minars the future still seems uncertain. The assessed value of the property, according to court documents, is more than $1.4 million but how much the utility will pay will be adjudicated.