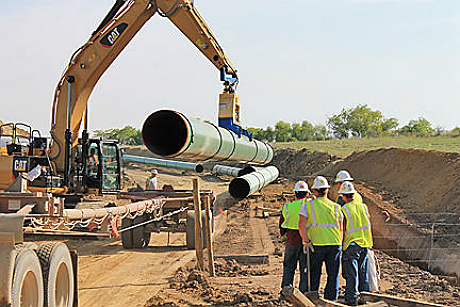 As recently as two or three years ago, major cross-country pipelines typically did not begin construction until a federal environmental impact statement had been completed and found them acceptable.

But as demonstrated last week, the times have changed.

On Aug. 18, a federal district court judge ruled that the nearly-completed 589-mile Flanagan South pipeline may proceed without undergoing a comprehensive evaluation of its likely environmental impacts.

Later this year, the pipeline, developed by Enbridge Inc., is to start carrying diluted bitumen extracted from tar sands in western Canada. The thick oil typically is combined with condensed natural gas and moved under high pressure and high temperature through pipelines. Dilbit pipeline spills in recent years have caused widespread damage in Kalamazoo, Michigan, and Mayflower, Arkansas.

Major pipeline projects, which in many cases will transport hazardous materials, are developed with a minimum of government scrutiny, according to the two lawyers who filed the case against Flanagan South. Government agencies are giving pipeline companies a lot of freedom to do as they wish, the lawyers contend. And industry is taking full advantage of the opportunities presented to it.

There’s been “a trend in the industry to try to avoid review,” said Jim Murphy, an attorney representing the National Wildlife Federation in the case filed against the U.S. Army Corps of Engineers and several other federal agencies. Pipeline developers have done so “by avoiding major permits to the extent they can, by avoiding border crossings to the extent they can, and by using existing rights-of-way.”

‘Go ahead and get it done’

Enbridge employed two of those tactics in the Flanagan South project. It sought, and was granted, permission to use what’s known as Nationwide Permit 12, an administrative option that allows a developer to move ahead without a public information process.

Also, the Flanagan South pipeline will closely follow an existing Enbridge pipeline, the Spearhead. Katie Lange, a community relations consultant for Enbridge, said the company chose basically the same route because the company can use some of the existing right-of-way, and because the neighboring communities are familiar with the project. However, she said, using a parallel right-of-way did not lead to any shortcuts for the company.

And if shortcuts have resulted, she said, the responsibility does not lie with the pipeline developer.

“We are not the ones who determine what permit process it goes through,” she said, “It’s totally up to the regulatory agency. The Corps is responsible.”

Murphy and Doug Hayes, the attorney representing the Sierra Club in the Flanagan South case, claim that wide-ranging environmental impact statements, once the standard in cases like this, no longer are.

“I can give you 15 cases where pipelines were analyzed under the National Environmental Policy Act,” Hayes said. He pointed out, however, that as of a couple years ago, pipelines ceased to garner that kind of federal scrutiny.

“Since then, we’ve seen federal agencies go to great lengths to cut corners and ignore federal laws that otherwise would have applied to pipelines.”

On March 22, 2012, President Barack Obama gave them explicit instructions to do so. On that day, he appeared at a TransCanada pipe yard in Cushing, Oklahoma, which bills itself as the “Pipeline Crossroads of the World.” Obama delivered a speech about the need for federal policies that would enhance the flow of the nation’s growing oil production.

“Now, right now, a company called TransCanada has applied to build a new pipeline to speed more oil from Cushing to state-of-the-art refineries down on the Gulf Coast,” Obama told his audience. “And today, I’m directing my administration to cut through the red tape, break through the bureaucratic hurdles, and make this project a priority, to go ahead and get it done.”

On the same day, Obama issued a directive to heads of executive departments and agencies titled “Expedited Review of Pipeline Projects from Cushing to Port Arthur and Other Domestic Pipeline Infrastructure Projects.”

It said, “To address the existing bottleneck in Cushing, as well as other current or anticipated bottlenecks, agencies shall, to the maximum extent practicable and consistent with available resources and applicable laws (including those relating to public safety, public health, and environmental protection), coordinate and expedite their reviews, consultations, and other processes as necessary to expedite decisions related to domestic pipeline infrastructure projects that would contribute to a more efficient domestic pipeline system for the transportation of crude oil…”

U.S. District Judge Katanji Brown Jackson, whom President Obama appointed to the federal judiciary in March, 2013, issued the ruling last Monday allowing the Flanagan South pipeline to continue construction. She described the pipeline as a private project on mostly-private land, that “Congress has not seen fit to authorize the federal government to regulate.”

The Sierra Club and the National Wildlife Federation are members of RE-AMP, which also publishes Midwest Energy News.

Flanagan South will move dilbit from Pontiac, in central Illinois, across the mid-section of Missouri and the southeast corner of Kansas to Cushing, Oklahoma. It will cross over about 2,000 wetland areas, including three major rivers: the Mississippi, Missouri and Arkansas.

The major issue, as outlined in Jackson’s decision, was whether or not the Flanagan South project involved a “major federal action.” Attorneys for the Sierra Club and National Wildlife Federation claimed that there were several “major federal actions” that should have triggered an environmental impact study of the entire 589-mile pipeline.

The U.S. Fish and Wildlife Service issued a biological opinion, stating that although the project would likely do some damage to local populations of two endangered species, it would not jeopardize the species as a whole. The Service granted Enbridge permission to proceed.

And four offices of the U.S. Army Corps of Engineers reached conclusions that the project qualified for expeditious review under the Nationwide 12 permit. Projects that meet the qualifications for Nationwide 12 review can move ahead without any required public input or scrutiny.

Enbridge spokeswoman Lange pointed out that the company did meet with people in communities along the route of the pipeline.

In the last few months, both the U.S. Army Corps of Engineers and the Bureau of Indian Affairs conducted very limited environmental assessments of land in their control: proposed crossings over the Mississippi and Arkansas rivers, in the case of the Corps, and about 12 miles of Indian land where the pipeline will run. Both agencies granted Enbridge permission to cross their land.

Hayes, who said the plaintiffs intend to appeal the decision, considers the three small NEPA evaluations to have been too little, much too late. They were done “only after the pipeline was built,” Hayes said. “So it was a fait accompli.”

Murphy, the attorney representing the National Wildlife Federation, views the limited environmental assessments as one more indicator that a comprehensive environmental impact statement was appropriate.

“The agencies themselves felt there was a major action that needed NEPA review,” he said. “The scope of review that should have been triggered is a broad one.”

“I think what it boils down to,” Murphy continued, “is that the judge really thought it was a largely private project on private land, and she did not want what she viewed as series of small federal involvements triggering a broad review. Where the judge wanted to narrow the NEPA obligations, we feel the NEPA is a statute that intends to broaden the obligation of agencies to look at environmental concerns.”

Reading the law narrowly, as Judge Jackson did, he said, “allows large projects to escape review. It’s an enormous pipeline, it carries a very dangerous substance, it runs under much of the nation. It’s pretty tough to think a statute designed to make sure agencies look at environmental ramifications doesn’t apply to a project that large in scope.”