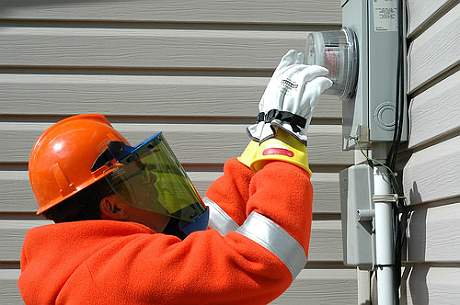 (Photo by SaskPower via Creative Commons)

In an ideal world, smart meters paired with sophisticated sensors and software programs in homes across the country would allow people to constantly shift their habits and alter their energy use to save money and reduce carbon emissions.

But even as utilities are increasingly installing smart meters and providing customers with data about usage, advocates say they are not generally offering the data quickly enough — or in as much detail as needed — for maximum energy conservation.

At the core of this issue is the question of who “owns” a household’s energy use data – the utility or the customer themselves. Also, whether and how the data can be automatically passed on to a third party – namely a company that will use the data help customers save energy.

These issues are being debated in Illinois before the Illinois Commerce Commission, which will in coming months adopt a framework that tells utilities ComEd and Ameren how to administer the new data systems that are part of the implementation of a 2011 smart grid state law, the Energy Infrastructure Modernization Act.

On August 15, the Citizens Utility Board (CUB) and the Environmental Defense Fund (EDF) filed a proposed Open Data Access Framework clarifying how consumer energy data should be handled. They are official intervenors in the case which will include litigation and result a binding document.

CUB and EDF are members of RE-AMP, which also publishes Midwest Energy News.

The Illinois case has national implications, since no states yet have such a framework in place, and conservation advocates hope the Illinois document could serve as a model.

“Data needs to move quickly, seamlessly and as easily as possible so it can be used to fuel clean-energy economies,” said CUB executive director Dave Kolata. “We need a customer bill of rights when it comes to data access. You can double the efficiency of the smart grid by providing as close to real-time data as possible.

“Part of the goal [of the framework] is to introduce energy literacy. People will go across the street for gasoline that is one cent cheaper, but we don’t have the equivalent for electricity.”

The commerce commission will hold a status hearing on the framework on August 29. Advocates say it is crucial the case progresses quickly since the utilities are currently in the process of developing their smart grid systems.

The proceeding must be completed before the utilities’ annual review, including their smart grid deployment plans, in April 2015, Kolata said.

The framework proposed by EDF and CUB has four fundamental components: that customers, rather than the utility, “own” their energy use data; that data be delivered at “high resolution,” (i.e., frequent intervals); that the data be delivered in real time or close to it; and that third parties be allowed automatic access to data if customers grant permission.

The framework also outlines different ways data should be available, including directly from the meter, online and on mobile devices.

Kolata and Andrew Barbeau, an EDF consultant and president of the Accelerate Group, said they are confident about working with ComEd and Ameren but that there have so far been sticking points between the parties.

ComEd spokesman David O’Dowd said “while we’ve not been included in the development of these proposed standards, we have already addressed many of the functionalities being proposed, and have worked with CUB to develop a process to send customer energy use data to CUB upon receipt of the customers’ authorization.

“However, this proposed standard is also about providing third parties access to customer data, and it will be important for all parties to collaboratively develop solutions that yield net benefits for customers and ensure customer privacy and data security.”

O’Dowd said the utility is the first one nationwide to adopt the Green Button standard, which CUB and EDF hope will be enshrined in the framework and also adopted by utilities around the country. Green Button is a free service developed by the energy industry that helps customers analyze and reduce their energy use.

But advocates say ComEd’s current plan – to provide energy-use data every 24 hours – is not adequate. The framework calls for information delivered in 15-minute intervals or even smaller increments, with customers getting access no more than an hour after the data collection.

Barbeau said ComEd and utilities in general have been resistant to the idea of providing third parties with residents’ energy use data.

“Utilities are not the innovators, utilities are the facilitators,” of using data to generate energy savings, Barbeau said. “Utilities will say, ‘We’ve done enough, we put a nice chart [showing customers’ energy use] on our website.’ But you’re not going to get major energy savings from the two percent of customers who log on to the website. You need innovative tools in your toolbox, whether it’s a smart thermostat like Nest or an app on your phone.”

A growing number of companies, including OhmConnect and EnergyHub, use software to constantly keep tabs on customers’ energy use and on regional energy prices. These companies advise customers on how to change their use in real time and then actually sell the aggregated demand response they’ve achieved in the wholesale energy market, returning some of the profit to customers. Such large-scale energy savings and financial incentives would be nearly impossible for most residential customers to achieve on their own.

Third-party access is crucial for many applications to work automatically, rather than relying on customers to upload the energy data that is provided to them by the utility.

“We need an easy way for these third parties to access that data,” Barbeau said. “Who is going to every day go to the utility website, download a spreadsheet and then upload it to the third party site? The third party needs to get it directly from the utility.”

Savraj Singh, founder of the company Wattvision, noted that companies like his allow customers to install their own sensors, providing data for analysis beyond what the utility offers. Wattvision’s systems relay data every 15 seconds. He thinks utilities should follow suit, making such systems cheaper and easier for customers.

“We can send consumers immediate alerts when energy use spikes or changes, and gives consumers a detailed, live graph of energy use, complete with history,” Singh said. “Our users can look at their data and see when their AC turned on, for example, and exactly how much more that costs…The promise of the smart grid has been around for decades now, and it’s remarkable that it’s still hard to get real-time data directly from your utility.”

Companies that make sensors, software and other components of systems that help tweak and modify energy use are strongly pushing for a national standard or more nationwide uniformity regarding how and to whom utilities release energy data. They say companies will be reluctant to pour resources into developing products that must be tailored for a varied patchwork of service territories.

There is huge potential for the industry. Navigant recently reported that annual revenue from Smart Grid services including such data analytics is expected to grow to $11.2 billion per year by 2023.

Jim Hawley is a spokesman for Mission:data, a trade group of companies and non-profits that help customers use data to achieve energy savings.

“Compared to the billions spent on smart meters, these additional incremental steps are very easy, very low cost,” Hawley said. “Something like 40 percent of the benefits of smart meters really is about demand management, it makes tremendous sense. For young companies that are trying to scale new products, they need a framework that is easy to use.”

Andy Cronk, CEO of the sensor data analytics company TempoIQ, said data provision is “usually very slow and delayed with utilities – you can’t see energy use for today until tomorrow. We’re trying to move away from the batch uploading to stream in real time…It’s the first principle of engineering, create an immediate feedback loop.”

Hawley said he is hopeful that utilities will eventually do the right thing, but a cooperative process and leadership from public service commissions is needed.

“Data access depends on both utilities and regulators – regulators having the right policies and utilities taking the steps to make the data available,” Hawley said. “This is an area where the public and private sector are both very important. There is just so much potential here in terms of energy savings and the ability to deliver real value to their consumers.”