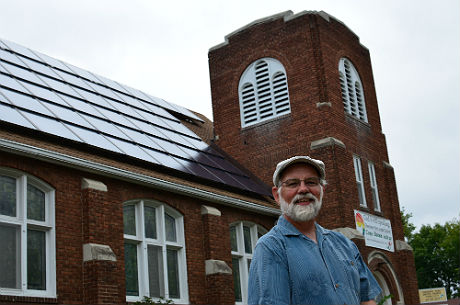 Bethel Evangelical Lutheran and Minnesota Community Solar came together earlier this year to promote a solar garden that will sit atop the roof of the Minneapolis church.

Without a panel yet installed, the 40-kilowatt (kW) solar garden attracted enough support from the church’s members and surrounding Bancroft neighborhood to be fully subscribed. The project encapsulated for Rev. Brenda L. Froisland a deeper spiritual tug that speaks to her faith and the teachings of Christianity.

“Part of our vision is that in gratitude, Bethel amplifies God’s grace, nourishes God’s creation, reaches out and builds community,” she said. “This is very much a manifestation of those points and our vision. “We’re noting this incredible resource called solar energy God gives us, and we’re nourishing God’s creation by reducing our carbon footprint and consuming less coal — all that’s connected to global warming, sustainability and simplicity.”

Bethel is not alone. A growing number of Minnesota churches and faith-based institutions are building solar projects, installing extensive geothermal heating and cooling systems and adding energy efficiency features — such as sensor-controlled lighting and improved energy monitoring — to their buildings.

“We believe interfaith engagement on climate change is going to be essential in making a difference on this issue,” she said. “Faith communities are well-positioned to have an important role in responding to this crisis.”

The approach of many churches has been to create “green teams” to conduct energy audits of buildings to reduce power use, move parishes to encourage ride-sharing to Sunday services and to push recycling.

While that’s all well and good, she said, the IPL wants to move toward collective action to tell the larger story of climate change — and what needs to be done because of it. Part of the push by IPL and the climate activist group 350.org involves encouraging individuals and religious organizations to drop their fossil fuel company stocks from their investment portfolios.

In 2013 the United Church of Christ passed a resolution to divest their investments in fossil fuels, but a similar motion failed at a national meeting of Presbyterians this summer in Detroit, she said.

Clean Energy Resource Teams communications manager Dan Thiede said churchgoers interested in renewable energy tend to believe in the “care for creation” model of belief and have “high moral and ethical standards and a desire to want to try to do something to reduce their impact on the environment.”

While pushing the divestiture rock up a hill will likely take some time, individual churches have, in the meantime, taken matters into their own hands by adding renewables to their buildings.

Among those who have or are installing solar projects in the Twin Cities include Mayflower United Church of Christ, St. Joan of Arc and Bethel Evangelical, all in Minneapolis; and Cherokee Park United in St. Paul. Outstate congregations with solar in place or plans for it include the Sisters of Notre Dame in Mankato and Crosslake Presbyterian Church in Crosslake.

Bill Mittlefehldt, who is helping lead an IPL chapter in Duluth, said several churches in his region have begun exploring solar power.

“They’re looking at opportunities and putting the financing together,” he said.

Geothermal installations are being used extensively on large senior projects by Presbyterian Homes and in smaller venues such as the Crosslake church, The St. Peter and Paul Catholic Church in Elrosa, and our Lady of Grace in Edina.

Churches have few advantages when installing solar or geothermal. Since they are nonprofits they cannot take advantage of tax credits. Yet they have competed for grants from utilities and received them in some cases, which offsets the full cost of installations.

Tim Johnson, the pastor of Cherokee Park United Church in St. Paul, and his congregation joined forces in 2012 with SunDial Solar Consultants to build a 21 kW Silicon Energy solar array.

The project used a lease purchase agreement along with rebates from Made-in-Minnesota and Xcel Energy’s solar program. Under the deal, SunDial Solar owns the panels for five years and receives tax credits, Johnson said.

The 130-member church only ended up paying around $9,000 out of a capital improvement fund for the $175,000 project, he said. Key to making the project work was an initial commitment the congregation made to green energy followed by a strong educational program explaining to members how the finances would work.

Today the project produces more energy than the church consumes and members are proud of their solar array.

“Nothing’s quite like a congregation,” Johnson said. “The personal investment people have (in nonprofits) isn’t quite the same as communities of faith have. Churches are perfect for getting that clean energy message out.”

John Mehrkens, Presbyterian Homes & Services vice president of development, said the decision to build large geothermal installations and green roofs at Carondelet Village and Folkestone in Wayzata both made financial sense over the long term.

Since the company owns the property and has no plans to sell, a pay-off period for a return on investment of seven to 10 years, as in the case of geothermal, works just fine. The company receives some benefits from rebates related to energy efficiency but “it isn’t that much of a factor. We’d have made the investments either way. We’re long-term holders of properties so we’ll get operating efficiencies over time.”

The decision played well, too, with the Sisters of Saint Joseph of Carondelet, a partner in the St. Paul project who insisted that sustainability play a huge role in the senior center.

Presbyterian Homes & Services has considered solar for senior housing but could never justify the cost and had concerns about aesthetics. “It just didn’t pencil in,” Mehrkens said.

Sister Margaret Belanger, a Carondelet resident, was part of a team that helped plan the senior community.

“We put down what we wanted in the building and sustainability was right there at the top,” she recalled. “Resources are limited and we wanted something that would use as little energy as possible and save as much as possible.”

Still, that doesn’t mean going green is always an easy choice. A 2010 Finance & Commerce article described how Lady of Grace’s church officers split their vote over a $475,0000 geothermal system, with the tie being broken by the Rev. Bob Schwartz — after he had prayed on the matter.

That’s perhaps not all that uncommon. Crosslake Presbyterian, for instance, had established a reputation for being good stewards of the environment over the last decade. Prior to construction of a new church several years ago the congregation debated whether to have geothermal heating and cooling.

Many in the congregation saw the technology as too expensive and wanted the money spent on classrooms. Roger Grussing, chair of the Energy Task Force, recalls when the news hit the geothermal project might not happen, church members stepped up to fill the financial gap.

The same was true last year when a proposed solar effort, called “The Noah Project,” came under the congregation’s microscope. A study showed how much carbon the church did not emit by having geothermal, by purchasing wind power and by saving and not subdividing a 10 acre forest it owned, he said.

The report included the potential impact of solar electric energy, a good addition because many of the church’s more than 90 members were skeptical of the project.

“It was necessary to take a step back and take a look at the benefits and costs of our progress,” he said. “It gave people time to allow their imaginations to come out to a positive point of view on the project.”

The church installed a 5.6 kW solar array that cost a total of $26,000. Now the church has an even more aggressive plan to potentially add solar PV to its roof, to a proposed car port and to an area on its grounds.

The money saved by using solar energy would be used to pay for solar hot air furnaces that Habitat for Humanity would install on homes. The furnaces are manufactured by the Rural Renewable Energy Alliance in Pine River. The project would help Habitat homeowners save money, assist the alliance continuing to train a green workforce and, Grussing hopes, move potential funders to help pay for more solar PV.

This is precisely what churches should be doing, Grussing believes.

“The churches’ role in this movement is to keep putting up more projects to show that there are more and more of us who believe in renewable energy and the problem of global warming,” he said. “We’re trying to move the story to a tipping point that is positive.”

IPL and 350.org are members of RE-AMP, which also publishes Midwest Energy News.