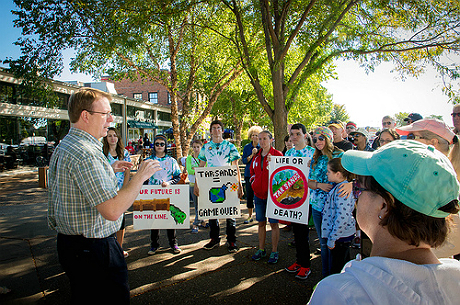 Iowa state Sen. Rob Hogg speaks at an event in Cedar Rapids in September, 2013. (Photo by 350.org via Creative Commons)

Rob Hogg is an Iowa state senator who spent much of August campaigning throughout the Midwest to bring attention to the changing climate.

Now serving his second term in the Iowa Senate, Hogg has advocated for several years for renewable energy and for action to forestall and minimize climate change.

In 2013, he released his first book, America’s Climate Century: What Climate Change Means for America in the 21st Century and What Americans Can Do About It, at a ceremony at the state Capitol.

Since 2011, he has helped to coordinate an advocacy group called Iowa Climate Advocates, aimed at educating the public about the dangers of climate change.

“We need for more Americans to speak up about the need for climate action,” he said in a recent interview.

“To deal with this effectively, sooner or later we need a national policy, and action on a global basis. We haven’t had that. Americans all over are investing in green energy, states are doing doing innovative things, but we need the national government to be involved in order to be fully engaged.”

The rest of his conversation with Midwest Energy News follows:

Midwest Energy News: Do you see signs that Americans are coming more to grips with this issue?

Could you provide a few examples of that?

A lot of retired military leaders are speaking out…the Climate Patriots. And the Climate Parents groups are growing rapidly across the country. The idea is that we care about our kids, so we should care about the climate.

Another group I want to highlight is 100 Grannies for a Liveable Future. It started here in Iowa. They are speaking up. One of them wanted to protest the Keystone (pipeline) and wanted to help her daughter out with a new grandchild in Maryland, so she took a trip out east. She was combining errands.

So you see signs of action among many Americans, and among some of their statehouse representatives, but not in Congress. Why do you think Congress is so slow to address this issue?

Multiple reasons go into it. The country is pretty divided over a lot of issues. [Climate change] has become an issue of division. There are interest groups that feel threatened by climate action.

If you’re a Democrat in West Virginia, you see your job as defending the coal industry. If you’re a congressman from Texas, you see it as your job to defend the oil and gas industries. That contributes to gridlock.

If we have impact on particular industries, we should address the concerns of those industries.

We may need to provide transition money to the workers and to the owners in those industries. That’s something that’s been done before, and we can do it again.

When was it done previously?

When we closed military bases in the 1990s. People re-invigorated many of those communities by doing new things. We need for Congress to function.

Congress has allowed the Production Tax Credit to expire. It’s expired as we speak. They could renew it right now, but they’re so dysfunctional, they can’t even do that. We need for Americans to insist that candidates have a plan to address climate change.

So you believe solving the climate issue basically comes down to putting more public pressure on Congress?

Isn’t that the only thing that has ever motivated Congress?

Some people might say that the loudest voices belong to those who write the largest campaign checks.

Have you been at this for a while?

I’ve spoken 40 to 50 times in Iowa on this issue in the last couple years. There’s a lot of momentum building in Iowa. In the last three years, we’ve added a Citizens Climate Lobby chapter in every congressional district [in the state]. We’ve got about 200 chapters in the country. Our goal is to be in every congressional district [nationwide] by the end of this year. It’s all about developing relationships with congressional representatives. We work with everyone across the political spectrum.

We have a network of people working across the state of Iowa. We had a meeting in Shenandoah, Iowa with Sheldon White, a member of the House of Representatives from Rhode Island. He was in Iowa for 48 hours. Forty people showed up.

We had events in Des Moines and had over 100 people at each event. We spoke three times. On college campuses, there’s a lot of enthusiasm for climate action.

I can feel it. It’s not the number one issue, but it has probably cracked the top 10. My sense is there’s a groundswell growing. Within six months to a year, we will reach the point where the momentum is unstoppable, and we will act.