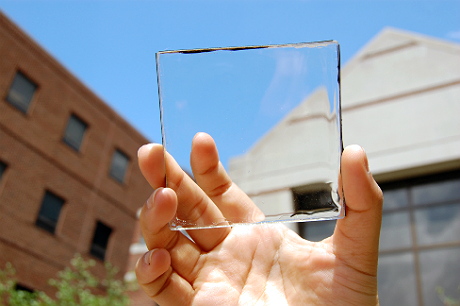 This transparent solar collector is the latest in a string of technology breakthroughs in Michigan, a state that advocates say still lags on solar policy. (Photo via Michigan State University)

At a third university here, researchers are using a centuries-old Japanese art form to address what is perhaps the biggest barrier to solar development: cost.

These efforts, together with what some regard as pioneering solar technology from the private, Michigan-based company Dow Chemical Co., suggest that Michigan is on the front lines of the evolution and growth of solar technology.

However, deployment of solar innovations still lags statewide, which some experts say is a public policy problem, not one of technology. These newly engineered products, at various stages of development, are emerging into a marketplace that has plenty of room for expansion.

“Here in Michigan, we seem to be making the greatest gains on the wind-energy side with development of very, very large-scale wind generation facilities. Solar, not so much,” said T. Arnold “Arn” Boezaart, director of the Michigan Alternative and Renewable Energy Center at Grand Valley State University. “We still struggle with solar, but it isn’t for a lack of know-how or technology.”

Researchers at MAREC announced in early August that one of the center’s tenants has developed a commercially scaled system to harness solar energy throughout the day and store it for use at night.

“In the case of renewables, solar in particular, I think the industry and those who work in that sector have been stymied with the question over energy storage,” Boezaart said. He called the technology a “breakthrough,” using lithium ion batteries similar to what is found in laptops.

The Solar24 (as in 24 hours a day) was developed from an earlier 100-watt version released in October 2013 by Energy Partners LLC. This second version is matched with 300-watt panels and can be deployed on commercial scale.

Boezaart said that with this newest model, the system can be “highly manipulated” to use a specific amount of energy based on need.

Jim Wolter, president and CEO of Energy Partners, said Solar24 is a merging of three technologies: traditional photovoltaic panels, high-tech batteries that store the energy and a control system based on algorithms “that is the heart of the invention.”

“It allows so much flexibility in terms of how one would partition this energy in the day and store it for later,” he said. “People don’t take too well to intermittent power. We completely understand that.”

The components are all together in one unit, which Wolter said is advantageous for safety and maintenance reasons.

“We’re breaking down a large battery into hundreds, perhaps thousands, of components,” he said.

Wolter, a professor emeritus of marketing at GVSU and co-founder of MAREC, said his team spent the past three years preparing for commercial development. He said the cost of the systems will vary, as will the rate at which the investment pays off.

When asked when the product will be available, Wolter said: “Show me the order.”

Aesthetic appeal and driving down costs

A few weeks after the Solar24 announcement, Michigan State University researcher Richard Lunt unveiled a new transparent concentrator that could be placed over windows to harvest solar energy — without anyone noticing.

“Once you realize you can make a technology like this, it really sparks the imagination,” Lunt, a professor of chemical engineering and materials science, said.

He added that the transparency adds an aesthetic component that could lead to “widespread adoption.”

The concentrators are pieces of glass or plastic embedded with luminescent dye, which absorbs a fraction of the solar spectrum and glows at another wavelength. That light is funneled to the edge of the sheet where a PV solar cell converts it into electricity.

The technology itself is not particularly new, though models on the market now are typically “very colorful,” Lunt said, and may not be as pleasing on, say, an office window.

“Because (our) materials don’t absorb or emit in the visible spectrum, they look exceptionally transparent to the eye,” he said. “It ends up looking just like a piece of glass.”

Lunt and his team spent the past year and a half on this particular technology, and he has studied solar harvesting systems since 2011. The team is looking to improve the concentrators’ 1 percent solar conversion efficiency rate to beyond 5 percent.

He is working toward commercializing the product within the next three to five years.

Considering the potential applications, Lunt said the concentrators have a chance “to make a pretty significant impact on energy. It provides an affordable way to capture solar energy.”

Meanwhile, roughly an hour southeast of MSU, solar researchers at the University of Michigan are taking on what is considered by some as the greatest challenge to widespread solar deployment: cost.

P.C. Ku, an electrical engineering and computer science professor at U-M, believes that affordability is the driving factor behind electricity customers installing solar.

“Although the price has dropped significantly in the past few years, there is still a lot of room for reduction,” he said. “I think the big bottleneck right now is how to make solar energy really cost-competitive to other types of energies.”

Enter Ku’s “origami solar cells,” a concept based on the traditional Japanese craft of paper folding to harness solar energy. Though much earlier in the R&D phase than Lunt and Wolter — Ku said he’s still working on drafting a paper on the cells — Ku hopes to develop a product for the market.

The origami cells effectively reduce costs by decreasing the amount of materials used on PV panels by a factor of three or five. Simply put: “We try to cut down the total area of the solar cell devices, which are very expensive semi-conductors.”

But just decreasing the size wouldn’t capture as much light, he said. “We have designed a very simple and low-cost concentrator to collect the light that would have been lost because of the reduction of the solar cell area.

“We take a low-cost film and fold it like a piece of paper, like origami, to create a fairly sophisticated 3D structure in the concentrator and integrate that with the solar cell,” he said. “We basically recover the light that would have been lost to the area. Now you can redirect the light using the concentrator arrays into the solar cell. … The idea is really to try to reduce the use of materials, not to try to make a different material or come up with a new material.”

Outside of academia, Midland-based Dow Chemical Co. has become what Scientific American called the “biggest name” in rooftop solar shingles, an alternative to the more familiar bolt-on rooftop solar panels.

The technology, which makes solar systems resemble a shingled rooftop, has reportedly been around for nearly 10 years. Dow first announced its own product in 2009. That year, Time Magazine named it one of the 50 best inventions of the year. The shingles launched in 2011 in Colorado. They are now available in 19 states — including Michigan, Minnesota and Illinois — and Canada.

According to Dow, the shingles are “a complete turnkey package that includes a custom designed system for each home, the inverter to convert DC to useable AC electricity, the utility interconnection so that credit is obtained for the electricity generated, and a web-based monitoring system that provides real-time system performance.”

Dow spokesman Josh Wimble said customers can expect a payback of two or three times the initial investment over a 20-year period.

Wimble declined to give specific sales figures, but he said: “It has proved a much more successful way of going to market since we switched to this model. We continue to see growing demand for the product.”

Are utilities and the market ready?

Wolters, who also worked for 15 years as a research physicist at General Electric, predicted there will not be rapid deployment of some of these technologies “until utilities themselves become, in a sense, inventors of these.”

However, for solar in general, he sees utilities investing more and more across the country.

“If you’re looking for instant overnight transition from old fossil fuel energy to full-bore renewable energy, one is going to be very disappointed,” Boezaart, of MAREC, said. “It’s very much an incremental journey, a process.”

In addition to cost and storage research, Lunt, of MSU, suggested infrastructure also plays a role in the future energy market.

“Improving the grid is an important thing we need to start doing to handle greater amounts of these intermittent renewable technologies,” he said.

Boezaart added that the struggle to deploy more solar comes from a “lack of public policy and collective will to make it feasible to incentivize solar generation.”

“It gives you a sense of how much work we still have to do in Michigan to incentivize and advance the use of solar,” he said. “We know how to do it — it’s not for a lack of technology.”