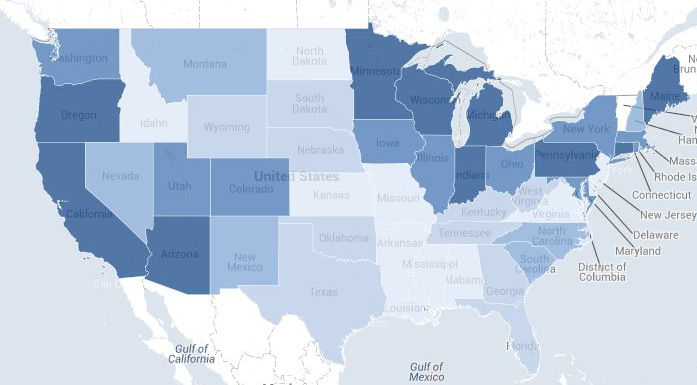 Compared to other regions of the country, the upper Midwest is one of the pacesetters nationwide for reducing energy use.

As a result, according to new calculations, the states clustered around the Great Lakes will be relatively well-positioned to meet the carbon standards now being developed by the U.S. Environmental Protection Agency and state governments.

The Center for Climate and Energy Solutions recently published a map with calculations of how much each state reduced its electricity use in 2012 as a result of efficiency measures, and how that stacks up against the efficiency goal proposed as part of the EPA’s developing new limits on emissions of carbon dioxide.

In June, the EPA published preliminary goals for each of the states to meet, in the effort to minimize carbon-induced climate change. Although the EPA has indicated that it will allow each state a lot of discretion in determining how it meets the carbon reduction goals – which will not be finalized until June 2016 – it is urging states to make generous use of energy efficiency to cut greenhouse-gas emissions.

The EPA is suggesting that states aim to cut energy use by 1.5 percent each year until 2030. Some states are already doing that, others are just getting started.

In the map and calculations done by the Center for Climate and Energy Solutions, the states clustered around the Great Lakes stand out for their progress in the energy-efficiency arena. Although none of them reached the EPA’s goal of a 1.5 percent annual reduction, a few came close. Minnesota leads the pack, having cut energy use in 2012 over 2011 by 1.12 percent. That compares to 1.05 percent in Wisconsin and Indiana, 1.01 percent in Michigan, .93 percent in Iowa, .87 percent in Ohio and .79 percent in Illinois.

Reductions in a few other Midwestern states were far less. Missouri, for example, reduced electricity use by only .12 percent in 2012, Nebraska by .3 percent and South Dakota by .13 percent. North Dakota cut consumption that year by .07, and Kansas by .02 percent.

“The upper Midwest is doing pretty well as far as efficiency,” said Kyle Aarons, a senior fellow at the Center for Climate and Energy Solutions, and the map’s creator.

Asked why that might be the case, he credited “some combination of electricity prices and state policy leadership. We usually see efficiency programs correlated pretty well with electricity rates, so if a kilowatt hour is expensive, there is more of a push towards efficiency. That is certainly a contributing factor across the country.”

Twenty-one states have policies that require utilities to provide efficiency benefits to their customers, for example. They include Iowa, Minnesota, Wisconsin, Michigan, Indiana and Ohio. Illinois, Kansas, Missouri and Nebraska do not have a mandatory efficiency standard.

Although the EPA is encouraging states to employ efficiency to achieve their carbon dioxide reduction goals, it is not imposing any requirements on how states reach the target. It has identified four broad strategies that are likely to cut carbon dioxide emissions: efficiency, renewable sources of energy, more-efficient coal plants and a transition from coal-burning to natural gas-fired plants.

Looking at patterns of efficiency across the nation, Aarons said, the EPA set a 1.5 percent yearly reduction target for all states based on the fact that some states are now cutting electricity use that much.

“They are assuming that all states can do that,” he said. With a “ramp-up” period, the agency is forecasting that “all states eventually will hit this 1.5 percent” level, Aarons explained.

The Center for Climate and Energy Solutions decided to create the efficiency map “to highlight the leaders, and show which states been doing a lot,” Aarons said. “If you’re a state that’s a lighter blue color, you can see what examples you should be following (in the darker blue states).”

The map, he said, demonstrates that “efficiency can play a role, and that when we see variation among states, that shows us opportunities. It shows that this is not a regional issue: it’s not because you have a warmer or colder climate.”

While a 1.5 percent annual reduction until 2030 in electricity use nationwide would mean a substantial diminishing of carbon emissions from power plants, it’s not clear that it’s really feasible, Aarons conceded.

“We’ve heard some concern that states that have been leading might struggle to keep up, because the first efficiency measures are the most cost-effective,” he said. After the incandescent light bulbs have been exchanged for compact fluorescents, and then those traded in for light-emitting diode bulbs, the cost of getting more efficient tends to get pricier.

“I can’t say if a 1.5 percent (yearly reduction) is achievable,” he said. “For now, we have to look at the EPA projections of how states will hit their targets. It helps us to visualize how much will be coming from each building block and how states can get there. States don’t have to follow it, but it’s one strategy out there.”