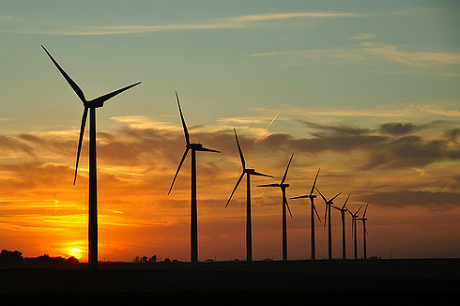 People in Iowa, which leads the Midwest in wind energy, are the least likely to believe that wind turbines impact human health, according to a recent survey. (Photo by tumblingrun via Creative Commons)

Science has frequently rejected arguments that wind turbines pose a threat to human health. And now the verdict is in both in the courts of legal and public opinion on the matter, according to a recent study and poll.

The survey of 2,477 voters was conducted by Public Opinion Strategies and FM3 on behalf of RE-AMP, which publishes Midwest Energy News.

Among the states surveyed, the lowest percentage of people who believe wind turbines cause health problems (7 percent) was in Iowa, a state that leads the nation in proportion of energy from wind.

Meanwhile, the highest percentage believing such claims (21 percent) was in Wisconsin, a state which has far fewer wind farms and where some political leaders have in recent years been hostile to renewable and distributed energy.

Also, a study released last month by the Energy and Policy Institute analyzed 49 legal proceedings in the U.S., Canada, New Zealand, the British Isles and Australia. It found that in all but one case, courts or legal officials rejected the argument that wind energy poses a health hazard.

Legal claims of health impacts were more prevalent in countries other than the U.S., the study found.

Wind energy advocates said that the results are encouraging and not surprising, given growing prominence of — and support for — wind energy. Yet they said distorted and unsubstantiated scientific and health claims continue to be a problem for renewable energy industries in general.

Advocates also stress that while turbines don’t typically cause direct health impacts, badly-sited turbines can cause irritating noise and visual impacts. So developers and planners must be responsible in making sure poor planning decisions don’t fuel otherwise unjustified animosity toward wind.

“When you’re dealing with sound and noise, sound is the science, noise is the subjective component,” said John Rogers, senior energy analyst at the Union of Concerned Scientists. “When it comes to subjective issues they are by their nature very personal. We want to measure what we can and acknowledge there are things we can’t measure.”

Along with a rundown of legal proceedings, the Energy and Policy Institute study also analyzes the background of a roster of people who have presented evidence as “experts” in legal cases claiming health impacts of wind.

The analysis shows that many of these experts have questionable credentials or have scientific or medical backgrounds in fields totally unrelated to the claims they are making. The study also showcases the use of highly questionable studies to make health claims, including studies with small sample sizes, ones based on subjects who voluntarily present (or self-select) themselves or other flaws.

“Wind turbine syndrome” is often described as causing insomnia, heart murmurs, nausea and a host of other maladies, due to the supposed effect of low frequency infrasound.

Pediatrician Nina Pierpont popularized the term in 2009 with a 294-page self-published book based in large part on phone interviews with 23 people who said they were sickened by wind turbines. The frequency of lawsuits alleging health impacts from wind turbines increased dramatically after Pierpont’s publication, the Energy and Policy Institute study says.

In 2012, Simon Chapman, an Australian professor of public health, examined anecdotal claims and found that at least 155 different symptoms had at some point been attributed to wind turbines.

Various scientific studies have found that wind turbines do not cause the kinds of health problems cited by Pierpont and others, though they have found evidence of the “nocebo effect,” wherein the power of suggestion appears to spark claims of health impacts.

Energy and Policy Institute study author Mike Barnard says those who promote health claims range from people who genuinely believe their own message to those with a larger political motive or self-interest — for example, backing from fossil fuels industries who see competition in wind energy.

“Whatever the reason, telling parents that their children will get sick is a proven way to get people to pay attention.”

Scope of the problem?

Kevin Borgia, public policy manager of Wind on the Wires, said he has not seen claims of health impacts stopping or significantly delaying individual wind projects. But he says such claims can still “color public opinion.”

Borgia added that while there is no valid evidence of health impacts from wind turbines, “that doesn’t mean there aren’t people who are annoyed by the construction of wind turbines.”

“There are people who are going to be annoyed by lots of changes near their homes, whether that’s new air strips or big box stores or some other form of land use,” he said. “I understand that, but annoyance is not a disease.”

Meanwhile Barnard thinks health claims can still pose a serious threat to the wind industry, and he thinks the claims have spread in the past five years.

Barnard noted that claims of health impacts are more common in New England than in the Midwest.

“I attribute this to differing cultural expectations that have evolved,” he said. “In the Midwest, people have more of belief that they control only what they own and less of a belief that their opinion should matter to neighbors. In New England, there’s a greater expectation of community involvement in any decision.”

Advocates say the key is using science and information to address residents’ fears and debunk myths.

Barnard compares some erroneous beliefs about wind turbine health impacts to a phenomenon in South Korea where a significant number of people believe in “fan death,” the idea that being in a closed room with a fan is dangerous because the fan splits oxygen molecules and makes it hard to breath. Barnard noted that there are no larger political forces behind this belief, but rather it “emerged out of a brew of human anecdote and irrationality.”

Borgia said that the spread of wind energy in the Midwest has done much to alleviate fears of health impacts or other concerns, since “fear of the unknown” is replaced by actual experiences living near wind farms.

Rogers noted that a Union of Concerned Scientists guide which helps residents evaluate conflicting claims about hydraulic fracturing is also useful for people trying to evaluate the credibility of claims about wind turbines or other energy sources.

And he said that proponents of wind energy or any clean energy source should be honest about what they don’t know, while trying to help the public better understand the very nature of science and its role in policy.

“Science is always an evolving thing – we’re always exploring, trying to expand our base of knowledge for decision-making,” Rogers said. “We want to make sure that science is as robust as possible, so that we’re making the best possible decisions.