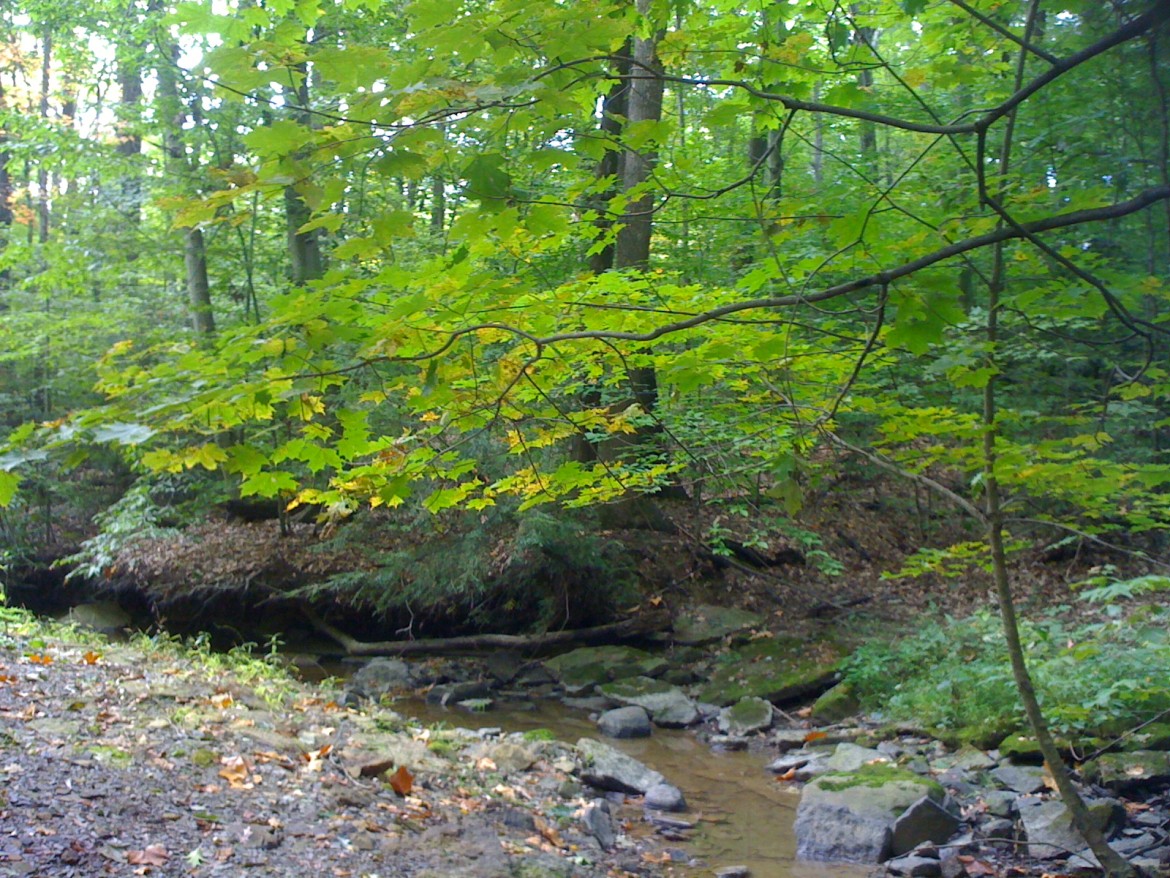 Groves Woods in Trumbull County, Ohio, -- in the northern area of the Utica hotbed of shale drilling -- is among dozens of natural area preserves owned by the Cleveland Museum of Natural History because of its ecological habitats. (Photo by Kathiann M. Kowalski)

Conservation experts say fracking and other shale gas activities can add to the dangers faced by Ohio’s rare species.

Yet as the Ohio Department of Natural Resources (ODNR) allows more and more natural gas activities in the state, its natural heritage program remains dramatically scaled back. That limits ODNR’s ability to identify and protect important habitats in sparsely surveyed areas.

Additionally, Ohio law exempts oil and natural gas activities from certain environmental requirements. It also allows massive water withdrawals for fracking and other activities. These and other factors can compound conservation threats.

Last Friday, experts at the Cleveland Museum of Natural History’s annual conservation symposium spoke about a wide range of threats faced by birds, bats, butterflies, mussels and amphibians — one hundred years after the last known passenger pigeon died in Ohio.

When Chesapeake Energy wanted to lease thousands of acres for possible shale gas development, Jim Bissell said no. Bissell is Curator of Botany at the Cleveland Museum of Natural History. And the land parcels were preserves in the museum’s Natural Areas Program, which Bissell directs.

As Bissell sees it, disrupting the areas for drilling, pipelines or related activities would clash with the very reason the museum had acquired the properties in the first place — conservation.

“When we buy something, we want to keep it that way,” Bissell said in an extended interview before the symposium.

“We go after the best of the best,” Bissell explained. “We want to find and protect as many different kinds of wetlands, forest types, bogs and fens and river bottoms” as possible.

Within those habitats, he said, “Everything is based on plant communities.

Meadows and forests attract different kinds of birds, insects and other animals, for example. And where rare plants are found, there are frequently rare animals too.

Protecting those areas requires minimizing disturbances — an inevitable consequence of drilling, pipelines and other natural gas activities. Even if the total area is small, the consequences can be huge.

“I would not want any pipeline, or any dry blade, to break any forest canopy,” Bissell said as an example. “In some cases the forest birds will leave.”

“Even the ones that are left may not have reproductive success,” he added. That’s because various species of birds and other wildlife need large contiguous areas in order to thrive and reproduce successfully.

Water protection is another worry. Even if activities don’t pollute surface water or groundwater, they can alter its level.

Bissell counted nearly 200 rare orchids at one fen the year before conventional gas drilling took place nearby. The following year, the fen’s waters had essentially “no flow,” he said. And almost all the orchids had disappeared.

Bissell believes the drilling somehow lowered water levels in the locale. The orchids are slowly coming back, but it’s been a 20-year process.

With the expansion of horizontal drilling and fracking since 2008, the industry’s water needs have grown dramatically.

Fracking pumps millions of gallons of water, sand and chemicals thousands of feet into the earth to crack shale rock formations. The sand holds the fractures open so oil and gas can flow out.

From 2012 to 2013, the number of horizontal shale wells in Ohio increased fourfold, from 85 wells to 352. This summer, this Ohio Department of Natural Resources (ODNR) announced that it expects continued growth of the state’s oil and gas industry, especially in the Utica shale.

However, such protection does not extend to other areas in the state, Bissell said.

That’s particularly bad news for the Eastern Hellbender. The endangered Ohio salamander is the biggest amphibian in the state, and the species is roughly 1.8 million years old.

Hellbenders thrive in streams that have little silt and sand. Adults mainly live and nest under partly embedded big rocks. Scientists believe juveniles live mostly in the spaces between gravel along stream beds.

Unfortunately, the hellbender’s remaining habitats in the state are “also the area for fracking well pads in eastern Ohio,” said Gregory Lipps, a herpetologist with the Ohio Hellbender Partnership who spoke at the Sept. 5 symposium.

Registrations for some water bodies show their water being all or mostly depleted, Lipps said.

Beyond that, most activities for oil and gas drilling and production are exempt from stormwater permit requirements in Ohio.

During a heavy rain, runoff from an uphill rig can become “a giant silt stream running right down into [a] creek,” Lipps said. That sedimentation can suffocate hellbenders’ eggs and ruin their habitat.

“Every time you turn around there’s something new attacking a native species,” said Bissell. “And a lot of them are actually accidental imports.”

Increased traffic into an area with vehicles, cars, rigs and other equipment means there are many more ways potentially destructive agents can get in.

“Invasive species spread on pipelines, just like they spread on power lines and roadsides,” Bissell noted.

ODNR insists it considers habitats before approving any new permit for horizontal drilling.

“ODNR rules, regulations and procedures require an inspector to perform a site review before any new horizontal well pad is to be built,” said agency spokesperson Mark Bruce. “This inspection takes into account numerous local factors, including topography, nearby residences, streams, wetlands and habitats.”

At least within the past five years, ODNR has not denied a permit for shale oil and gas activities on the grounds that there were rare, endangered, or threatened species or habitats, Bruce reported.

Clean Water Act requirements or other concerns can lead companies to survey and protect some areas.

Earlier this summer, representatives of M3 Midstream led journalists on a tour of the company’s Harrison Hub fractionation plant in Scio, Ohio, as part of a program organized by the Institute for Journalism & Natural Resources. The property measures approximately 600 acres.

“We did place approximately 18 acres of riparian and wetland area [under] an environmental covenant and avoided impacts to over 13 acres of high quality wetlands and several thousand feet of headwater streams,” said Dave Mashek, a spokesperson for M3 Midstream. “We also worked with the Ohio Wetland Foundation to create over nine acres of mitigation wetland for project impacts.”

The facility obtained a permit under Section 404 of the Clean Water Act. The company coordinated surveys and mitigation with ODNR, the Ohio Environmental Protection Agency, the U.S. Fish & Wildlife Service, the U.S. Army Corps of Engineers and the Ohio Wetland Foundation, Mashek added.

However, many well pads and other activities with a smaller surface footprint would not have to go through such extensive surveys and testing.

And an inspector from ODNR’s Division of Oil and Gas would not know all of the rare plants and animals that should be a concern for a particular area. That’s because there’s relatively sparse data for many areas.

“No one knows where the good places are until somebody looks,” said Bissell. “Where it’s ‘hot’ right now [for drilling], those are some of the poorest inventoried counties.”

The Cleveland Museum of Natural History and its partners have contributed a lot of data for northeast Ohio. However, ODNR and other groups have not gathered such extensive information on rare plants and animals in Ohio’s eastern and southern oil and gas development area.

“We do not have enough people in our Ohio natural areas program,” Bissell stressed. “They should have a team of two dozen at least, if not three or four dozen. The state of Ohio is a big place.”

Around 2007, however, the Ohio government cut the size of the program’s staff from about 40 individuals to less than a handful. The current natural gas boom began around 2008.

“There are so many things heading for extinction at this point,” Bissell noted. If people don’t know what to look for in an area, it could be too late to save them before fracking and other natural gas activities take place.

“At a time when we need the data the most, we don’t have the capability of producing it,” Bissell said. “It’s scary to me.”

The Cleveland Museum of Natural History is a member of RE-AMP, which publishes Midwest Energy News.