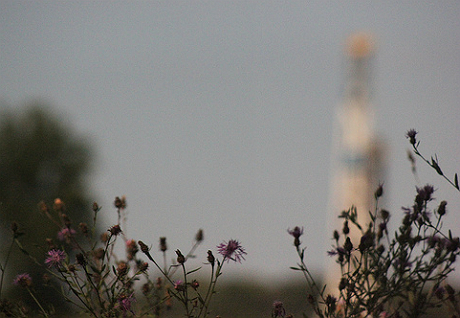 A drilling rig in the Marcellus Shale in Pennsylvania. (Photo by WCN 24.7 via Creative Commons)

Petroleum backers say a new job survey makes the case for why Illinois should be doing more to expand drilling, particularly fracking, in the state.

The oil and gas industry has created 263,700 jobs in Illinois, according to a study released by the American Petroleum Institute Tuesday that lists direct, indirect and induced jobs created, as well as vendors with contracts with the industry, in each state.

In Illinois, 932 businesses are part of the oil and gas supply chain, the study says, supporting $33.3 billion, or five percent, of the state’s economy.

Specifically, they are upset with the revised draft rules for fracking that the Illinois Department of Natural Resources released August 29 after considering about 30,000 comments filed on a previous version of the rules.

“If you look at what industry wants or needs, it’s a long-term projection to make a play on a well,” said Watson. “If you use the process to change the rules that were negotiated, that’s sending some bad signals. Do we want to nurture this industry for the better good or not? It’s really that simple.”

However, hydraulic fracturing still counts for a relatively small portion of jobs created in Illinois and nationwide, if the industry’s recent numbers are compared with a 2013 study by the U.S. Chamber of Commerce that said unconventional oil and gas (including fracking) has created 38,652 jobs in Illinois.

Environmental advocates and watchdogs have questioned the numbers in the Chamber study.

Critics of such studies have said the job creation numbers don’t take into account the net effect of industry impacts on the environment and quality of life – which could hurt jobs in fields like tourism. And they worry about the “boom town” effect wherein many jobs last only for a short amount of time and are often filled by people from outside the area.

They also often question the high number of induced jobs, for example, the U.S. Chamber’s conclusion that unconventional oil and gas has already created more than 2,000 health care jobs and 601 insurance jobs in Illinois.

“What jobs are we talking about?” asked Natural Resources Defense Council spokesman Josh Mogerman. “Is this similar to other job studies counting potential exotic dancing jobs that might arise from other energy projects? Fracking comes with very real threats to the public. Rather than addressing those issues, the industry seems to be offering fake jobs.”

In the study, Illinois ranks eighth nationally in the number of jobs created by the oil and gas industry. Ohio is ninth, Michigan is 11th and Kansas is 12th.

Though states like Illinois and Indiana do not rank high in oil and gas production, the study cites their involvement with the supply chain for operations in other states. Indiana ranks 24th and 25th in oil and gas production, the study says, but the industry accounts for $16.6 billion or 6.3 percent of the total state economy, an amount surely attributable in part to facilities like the BP Whiting oil refinery. The study says that Ohio and Minnesota also see about 5 percent of their economies supported by oil and gas.

Many of the vendors listed in the API study have a clear relationship to oil and gas operations: companies like Ozinga Ready Mix Concrete, Beg Liquid Mud Services, Canadian National railroad and the steel mill Arcelormittal. Other companies listed are ones that any business or even regular resident would typically deal with: Dish TV, Chase Card Services, a number of AT&T affiliates, cell phone and office supply companies, and the Butterball Turkey Gift program.

“I don’t remember U-verse shifting its business model to oil & gas exploration, so clearly we are not talking about direct job creation,” said Mogerman.

The vendor list was compiled by surveying API members between October 2012 and September 2013. The jobs analysis was conducted for API by the consulting firm PriceWaterhouseCoopers.

Milito argued that the jobs study shows small and medium-sized companies are benefiting from oil and gas, especially the shale boom.

“All components of it are key to the team succeeding, whether it’s large Big Oil or the small mom and pop restaurant down the street in Youngstown that’s feeding the workers,” Milito said.

In July, the API published community engagement guidelines, which Dougher said they encourage their member companies to utilize, with separate recommendations for entry, exploration, development, production and exit phases. The guidelines stress “integrity,” “working collectively” and understanding and respecting a community’s values. The guidelines are specifically tailored for areas where fracking is in the early stages or underway.

The API study cites a survey conducted in Illinois in April wherein 602 registered voters were surveyed by phone, and 79 percent of them said they support more development of domestic oil and gas resources.

Such support has not been reflected in the debate over fracking in Illinois, where environmental and clean energy groups and many landowners in areas targeted for fracking have stridently raised concerns and demanded the state impose tougher regulations or a moratorium on fracking.

A 2013 survey by Southern Illinois University-Carbondale found a nearly even split between those who felt fracking should be encouraged or discouraged, with 20 percent undecided. However, a proposed fracking ban in Johnson County, Illinois failed at the ballot box earlier this year by a wide margin.

Fracking opponents were encouraged by some of the changes in the draft rules released last month, which still need to be approved by the state Joint Committee on Administrative Rules. The new draft rules include provisions related to radioactivity, a requirement that public permit hearings must be held within 30 miles of the area planned for fracking, a seven-day limit on open pit storage of waste and doubling the radius (from three to six miles) for notifying people of fracking activities within zones prone to earthquakes.

Watson said that because of the “uncertainty” created by the drawn-out rulemaking process, oil and gas companies looking to invest in fracking are likely to forgo Illinois and focus on other states.

“There was a time when people were saying this [Illinois rulemaking process] is a model for the nation to look at because industry, environmentalists and policymakers sat down together,” said Dougher. “But environmentalists didn’t like what happened. They made more mainstream folks peel back. All this hesitation is a result of their complete position that they do not want hydraulic fracturing to occur in this state no matter what.”

Members of the group Southern Illinoisans Against Fracturing our Environment (SAFE) say it is not only environmentalists but many landowners who oppose or have serious reservations about fracking, including fears of earthquakes, water contamination, air pollution, and increased traffic, noise and other quality of life issues.

“The bottom line is that you cannot frack safely in a highly probable earthquake zone such as southern Illinois, the potential for a catastrophic event makes jobs pale in comparison,” said SAFE leader and southern Illinois resident Annette McMichael. “And the dangers of fracking far outweigh the creation of some fast food jobs for local residents. Southern Illinoisans don’t want to continue the boom and bust cycle we’ve experienced in the past. With a fracking boom all the jobs will be gone when the wells dry up.”

The Natural Resources Defense Council is a member of REAMP, which also publishes Midwest Energy News.