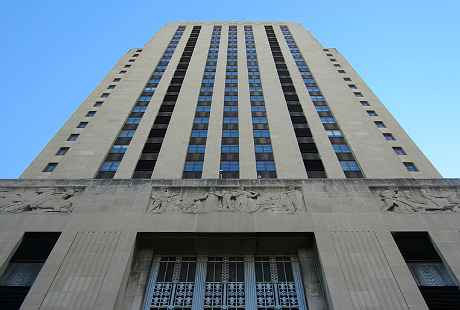 When cooled air is being pushed into an empty room in Kansas City’s health department or City Hall, odds are good that word will quickly reach the people who oversee such matters – and that they’ll get it stopped in short order.

This city government’s got ESP – the Enterprise Sustainability Platform, a digital system for keeping very close tabs on energy use. It’s one of the most important tools that enabled Kansas City to slash energy use in four of its larger city buildings by an average of 29 percent between 2010 and 2013. Now, the city is aiming to bring those strategies and savings to other large structures in town.

With a federal Department of Energy grant awarded to 10 cities nationwide, the city is angling to get other large property-owning institutions in town to start measuring, or “benchmarking,” their energy use – the first step towards cutting energy use.

“We’re hoping to drastically increase the amount of utility-consumption information disclosure,” said Robert Rives, the city’s facilities manager. “It’s been commonly found that when people begin to look at utility consumption not just as a cost of doing business, but start looking at the data and seeing how much they can save by making operational changes, it puts it more in the forefront of their minds that this is a cost where there is savings available.”

Earlier this summer, Kansas City Mayor Sly James issued a very public invitation to corporations and other large entities to start tracking their energy use in an EPA software program known as Portfolio Manager. The city now tracks energy use in 28 of its buildings with the system, a number it aims to hike to 50. So far, a total of 122 local buildings are enrolled in the Portfolio Manger system.

“Hopefully our efforts here in the city can be an example for others to follow,” Rives said. “We’ve been in a leadership role, and we actively share our successes and processes with others.”

Jim Whittaker, chairman of the board of directors of the International Facilities Management Association, said the city government’s success in cutting energy use “is giving them a forward-thinking energy-efficiency strategy for the entire community.”

Kansas City started down the energy-efficiency road several years – and a couple of mayors – ago. The current mayor has made it a highly visible priority, however, and his building-management staff has woven all the digital magic together a way that’s unusual and noteworthy, according to a local facilities manager who’s familiar with practices nationally.

“A lot of cities are doing great things, and it’s starting to spread,” said Teena Shouse, vice president of Facility Engineering Associates, based in the neighboring suburb of Leawood, Kansas. “But some of the things that [Kansas City] did to connect the system are pretty advanced.

Although the ESP monitoring system has been instrumental in the city’s energy-efficiency strides, there’s much more in the city’s tool kit.

The city reduced energy use by 31 percent over three years in its downtown parking garage in part by devising a system to turn on the LED fixtures only when really necessary.

The city also has gotten into the business of generating some of its own power. It recently finished installing solar panels on the rooftops of city-owned structures in 62 locations. It’s projected that the 1,550 kilowatts of capacity will generate about 1 to 2 percent of the energy used in city buildings.

But tying together and undergirding the entire system is the ESP system that continuously monitors and analyzes heating and cooling, and then alerts the city’s facilities staff to possibly needless energy use. The facilities staff tells the system what the temperature should be in different buildings, and when heating and cooling and lights should turn on. Then, when the systems veers too far outside those parameters, messages show up in e-mail inboxes and in the ESP Web portal.

The system makes it easy, for example, for the city to know how much energy is used per square foot in every one of the city’s fire stations. The city can then target, say, the 10 most-energy intensive stations for corrective action.

ESP “helps us find operational things,” Rives said. Things like a spike in electrical use at 2 a.m. on Sunday mornings in the Municipal Court building.

“We asked ourselves what made that,” Rives continued. “It’s like a murder mystery almost. We do have a little fun at times. We looked at the building operation schedule. We found out that two or three air handlers were coming on for no apparent reason.

“Our assumption is that a program was put into the system but was never taken back out. It’s like the way you can put a timer on a coffeepot. This thing was coming on. We think it was just a programming error. Someone might have asked to have the building turned on at 2 a.m. one Sunday.” Without ESP, he said, “We would have never found it. No one’s here at 2 in morning.”

ESP gathers information from hundreds of data points in the climate control systems including temperature sensors inside and outside of city buildings, motors and fans that push heated and cooled air, and even a national weather station to have complete and accurate information about the performance of the systems

It funnels it all together so that city facilities staff can access it at one Web portal. Generally, facilities and operations staff huddle once a month to review the data, identify problems and solutions.

The almost-instantaneous feedback that ESP provides allowed the city to experiment with different heating regimens for its 30-story City Hall., where the temperature historically ran too hot and then too cold. Building operators found that keeping the north side somewhat warm overnight, then cranking up heat on the south side in the morning produced a more steady temperature, and a lower bill for steam.

ESP “provides more opportunities to make operational changes than we’ve ever had before,” said Ryan Robertson, the city’s energy manager. “It’s the sum of catching those instances that creates a change. As a collection, you start operating the building as efficiently as you should be.”