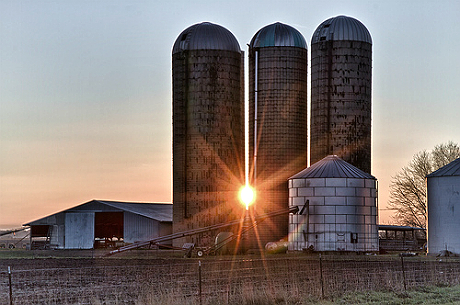 A farm near Schoolcraft in southwest Michigan. Experts say grid limitations are preventing some farmers from investing in new equipment. (Photo by Jason Mrachina via Creative Commons)

As Michigan’s agriculture sector grows more productive and efficient, those in the industry say the state’s electrical and natural gas infrastructure is not keeping pace.

Overall, farmers are increasing productivity and getting more value out of the same acreage of land. But they and others in agribusiness say reliability concerns — particularly in rural areas in the southwest and Thumb parts of the state — are holding back investments in new and larger equipment.

And access to natural gas and electricity has been an ongoing concern for the industry, which contributes over $90 billion to the state’s economy and is second in the nation in crop diversity.

“The quantity of usage is coming up so much because of yields and the amount of product we have to move now,” said Chuck Squires, credit and government relations manager for Cooperative Elevator Co. in Pigeon, Michigan. “The size of equipment we and other people in agribusiness are building and using now for efficiencies are just starting to push the infrastructure.”

For example, Squires said he’s seen a roughly 50 percent increase in crop productivity for corn over the past 12 years.

“Unfortunately, we haven’t gained 50 percent more time in the fall because of that harvest,” he quipped.

For others, it’s a matter of aging infrastructure and confronting “end-of-the-line” transmission issues.

“We have areas we’d like to develop but the cost becomes prohibitive for businesses to develop because of the infrastructure in place and how far we have to go to hook into the grid,” said Dennis Stein, a business management educator for Michigan State University’s Extension office in Tuscola County. “The structures that have been installed are old, a majority from the 1950s and ‘60s. Electrical needs and use has changed tremendously.

“You can’t build a business if you don’t have power.”

Squires and others participate in a task force convened by the Michigan Agri-Business Association that brings together stakeholders to help address these energy issues. And in an effort to bring the problems to state regulators, representatives from the agricultural sector have led two tours in various parts of the state for members and staff of the Michigan Public Service Commission. The tours included stops at seed corn facilities, milk and flour production businesses, and greenhouses.

“The agriculture community is increasing their productivity here, but I wouldn’t characterize them as struggling,” MPSC Chairman John Quackenbush said in an interview. “However, energy might be holding them back from accomplishing some increased production. We don’t want energy to be a barrier to the success of any businesses in Michigan.”

And while other farm states share in some of these issues, Michigan is somewhat unique in that crop production — especially for potatoes — is moving farther north every year, which Quackenbush said “some might attribute” to climate change.

“Because of the shifting location of where the power is demanded, we need to adapt to that here,” he said.

The cost of growing

While most of those interviewed for this story said it would be difficult to quantify the economic challenges posed by outdated infrastructure or unreliable power, Squires can.

As a grain elevator company, Co-op takes in crops — corn, soybeans and wheat to name a few — from farmers and stores them until they are sold to the market. When these crops come in, one of the biggest challenges is drying them out before storing for any period of time.

The process typically runs off propane or natural gas, while electric motors are needed to move corn to the driers and up the silos. Companies like his are purchasing larger driers to handle more bushels per hour.

When Co-op expanded an existing elevator in 2011 in the small village of Akron, Michigan, it needed motors with increased drying capacity, which required more electricity. But the equipment risked jeopardizing power access for the roughly 400 people who live in the village, Squires said.

In response, the company spent $75,000 on a “soft-start motor” for the equipment, which takes longer to build up to full speed and draws less current.

In 2012, the company expanded another plant. “We had to build our own little electric substation for our use because we were expanding the use of electricity so much off the line.”

Over the past 10 years, Squires said the company has put in just over $100 million in assets, which includes silos and drying systems: “Roughly $1 million of that would be strictly to approaching or working on this energy situation.”

Renewable energy projects in these rural areas may be at least part of the solution.

One of the best places in the state for harvesting wind energy is in the Thumb area on the east side of the Lower Peninsula. Quackenbush said these farms could be supplemented with transmission lines that integrate locally — “distribution lines where the last mile is, so to speak.”

Quackenbush said new transmission projects “certainly play a part” in improving reliability issues. However, those have traditionally brought their own set of issues.

Johnathan Hladik, senior policy advocate for energy and climate policy for the Nebraska-based Center for Rural Affairs, said transmission issues — as a result of reliability concerns — are playing out on farms nationwide.

“This directly affects a farmer’s life,” he said. But after following transmission line proposals throughout the upper Midwest and Great Plans regions, Hladik said he’s finding farmers receptive to the projects, particularly on where the lines will go, if they are engaged early. Also, utilities respond better if opposition is worked out earlier and eminent domain is avoided.

Quackenbush said the MPSC is “thinking about creative ways to help finance those upfront contributions” by customers toward building new transmission lines.

Stein, of MSU Extension, called spending on new transmission lines a “chicken or the egg” situation: “Utilities aren’t going to spend millions to expand a system if the use isn’t there, but businesses aren’t going to expand if there’s no power out there. We truly have to depend on the public entities or some higher group that has long-term visions and desire to see development continue.”

He also suggested there should be a short- and long-term master plan for development that looks at places where new transmission is needed and what needs upgrading.

“If they do nothing, we start degrading, we don’t progress over time and we definitely fall behind. The farther you fall behind, the harder it is to catch up.”

“I’m certainly sensitive to this agricultural group. They are key to the economic growth of this state,” said Garrick Rochow, vice president of customer operations and quality for Consumers. Rochow also grew up on a rural farm in Michigan that raised beef cattle and poultry.

Rochow said Consumers has helped lower upfront costs for multiple farmers, sometimes in the tens of thousands of dollars. In a letter to the Midland Daily News in April, the company cited one Hillsdale County farmer who sought for nearly a decade to increase his soybean and corn production, but that the $75,000 cost to do so was prohibitive. The utility says it helped him cut those costs in half.

The letter came following a Colorado State University report that ranked Michigan 25th in the nation on its “Agribusiness Friendliness Index.” 40th for diesel fuel prices, 35th for electricity prices and 25th for natural-gas prices.

And demand appears to be growing: In 2013, Consumers had 236 service requests from the agriculture industry, he said. This year, there have been 901.

But Rochow confirmed what Stein said of the “chicken or the egg” transmission projects: In most cases, expansions are low-voltage projects that wouldn’t make sense economically to devote a new transmission line to.

For now, the beginning stages of any solution may just be getting utilities, regulators and those in the agricultural sector to sit at the same table.

“We understand it doesn’t help matters to all of a sudden plug into a utility and tell them we just added a million bushels of capacity and need this amount of more juice,” Squires said. “But we need to be ready because these yields are going up, we need that capacity. We know it’s going to cost, but on the other hand, we need to serve our farmers out here.”