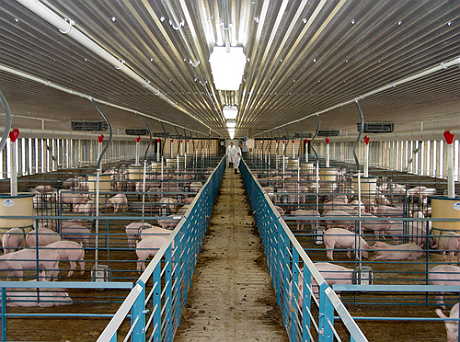 Conditions inside a swine barn can be tough on lighting fixtures. (Photo by Virginia Cooperative Extension via Creative Commons)

Over the past few years, LED fixtures have taken over streetlights in cities and towns across the country. Next up: American agriculture, especially Midwestern hog-confinement operations.

In Washington County, Iowa, the bullseye of hog production in the state, LEDs “are coming on, and increasing in popularity exponentially,” said Jason Prochaska, owner of Sitler’s Supplies. Since his business began selling a combined LED fixture and bulb about 18 months ago, Prochaska said, “We’ve been doing a ton of projects. We’ve probably sold close to 10,000.”

And hog-confinement buildings, which are seemingly under perpetual construction in this part of the world, use a lot of electricity. According to Prochaska, a typical “finishing” building, where hogs spend the last few months of their lives, might have between 40 and 150 lights that would be turned on for 10 to 12 hours a day.

A “farrowing” structure, where piglets are born and spend their early lives, might have between 500 and 600 lights, which likely would be turned on for 16 and in a few cases as many as 24 hours a day, Prochaska said.

His company also has sold quite a few LEDs to large hog operations in South Dakota.

Benjamin Wipf is an electrician who is part of the Shannon Colony, a Hutterite community that farms near Madison in southeast South Dakota. The colony raises hogs and is now building a barn that Wipf projects will house about 240 dairy cows. He plans to put between 400 and 500 LED fixtures in the new facility. Although the colony is still using compact fluorescents in its hog operation, Wipf said they’re almost certain to trade them in for LEDs in the next five or six years.

“The number one thing is they have a way longer lifespan,” he said. “They can last 80,000 hours,” compared to the compact fluorescent fixtures he now uses that burn for about half that long. The rugged conditions inside the typical hog-confinement barn – a high level of moisture, and a power-washing a few times a year – are hard on light bulbs.

As a result, compact fluorescents usually are put into a glass “jelly jar” to keep them dry, according to Justin Foss, a spokesman for Alliant Energy, which provides rebates to farmers and other customers who purchase efficient lighting. That solves one problem, but creates another. CFLs generate heat that is trapped in the glass jar and burn out the bulb. And the result is a bulb with a much shorter lifespan than advertised, according to Foss.

That also means lots of labor expended on replacing light bulbs – not necessarily an easy task in a hog confinement barn.

Foss said he heard about one barn in which a large proportion of the bulbs were burned out because the owner didn’t want to tackle the chore of changing them.

Prochaska estimates that only about 10 percent of Iowa hog farms have made the switch to LEDs. The vast majority continue to change their compact fluorescent bulbs more often that they’d like. And another 10 to 15 percent, he figures, are clinging to their incandescents.

“There’s been a lot of frustration in general that the bulbs weren’t lasting,” he said. “It’s been this continual problem. Now that manufacturers are making lights that have longevity and durability to survive these conditions, farmers are flocking to them. They’re seeing instant payback with energy use and labor.”

Maybe not quite instant, according to Minnesota-based swine consultant Mike Brumm. The economics of LEDs on hog farms are a bit more nuanced, he said. Costly LEDs tend to pay off best in farrowing operations, because they leave lights on for many hours a day. Also, they are well-suited to installation in new construction, he said.

When it comes to putting them in existing fixtures, he said the payoff could be much longer. He’s testing some LEDs now, trying to determine under what conditions they make the most financial sense. Regardless, he said it’s critical to purchase bulbs that have been rated for use in jelly-jar fixtures so they don’t overheat.

The LED fixtures that have recently come on the scene are packaged inside a protective cover. And since high-quality LEDs generate almost no heat at all, they don’t tend to overheat.

The price for LED fixtures has fallen by about $20 in recent years, Wipf said. But the current price – still about $50 or $60 per fixture – is discouraging, he said. A compact fluorescent bulb usually sells for around $3. But when the LED price falls further – and Wipf is certain it will – he expects that he, and other farmers, will get in line.

The momentum behind agricultural LEDs in Iowa may be partly a reflection of farmers who’ve demonstrated that they value energy efficiency. Solar panels, for example, have gotten a lot of traction on Iowa farms in recent years.

“Iowa farmers are some of the most aggressive in energy conservation,” said Ryan Rogerson, a manager at Precision Structures, an Iowa company that builds hog barns and began offering LEDs as an option 18 months ago. “The more people find out about it and how much can save, it seems be building. It grow and grows and grows.”

There’s another factor though. Alliant Energy, which serves most of the eastern two-thirds of Iowa, pays half of the cost of efficient bulbs, including LEDs for agricultural use. In addition, about a half-dozen rural electric cooperatives also provide comparable subsidies on energy-saving bulbs, according to Prochaska. He said MidAmerican Energy will pay 25 percent of the cost.

“People hear ‘LED’ and think it will be very costly,” Prochaska said. “But we’ve had instances where it costs less to put an LED in. If the energy provider is going to pay half of the cost, you can hardly go wrong.”