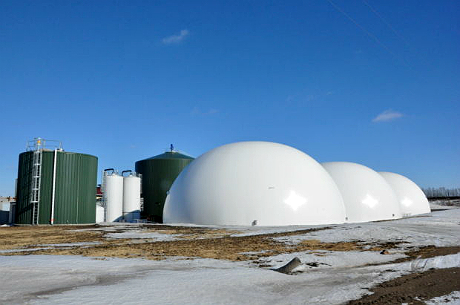 The Hometown Bioenergy plant near Le Sueur, Minnesota, can produce up to 8 MW of electricity. (Photo ©Le Sueur News-Herald, used with permission)

With the help of some aggressive bugs that thrive on a diet of waste and manure, the $45 million Hometown Bioenergy plant in Le Sueur, Minnesota has reached 60 percent capacity since opening in December of 2013.

“It’s a biological process, it’s not like you can flip the switch,” said Kelsey Dillon, the vice president of bioenergy for Avant Energy Inc., which manages the plant. “There’s definitely an art to getting the bugs acclimated and getting them tuned up to digest this material at higher and higher strengths, if you will, we’re still in that ramp-up period, but it’s going well.”

The anaerobic digester, capable of producing 8 megawatts of electricity, is one of the largest facilities of its kind in the country. It sits on a 35 acre site and draws customers from a 60 mile radius, including sweet corn canning operators and other vegetable processors, who bring their waste and pay tipping fees to have Hometown take care of it, she said.

A subsidiary of the 12-member Minnesota Municipal Power Agency, Hometown is one of a growing number of industrial scale digesters either under construction and in the planning stages in Minnesota and around the country.

The Central Region office of Natural Systems Utilities LLC will soon announce two industrial-scale anaerobic digester projects in the Midwest valued at between $14 million and $40 million, one that will be located in Minnesota, said Ryan Brandt, executive vice president.

“We’re starting to see the market shift to favoring projects in the $10 million to $50 million range, while the projects $10 million and less are harder to raise capital for,” he said.

Several trends are making for a more attractive market for digesters, among them a desire to reduce the level of waste going to landfills, to produce more renewable energy and to create value out of agricultural waste, he said. Minnesota’s food industry needs disposal options and anaerobic digesters provide an answer, said Brandt.

What differentiates these new projects from the kind of farm-based digesters that employ manure to produce methane is that the larger operations rely on food and agricultural waste, he said. In some cases the digesters will be located near food and beverage manufacturers that have a steady of waste available for disposal.

“Europe has had this for decades but now we’re just catching wind and seeing how waste is being redefined for us,” Brandt said. “We’re seeing a market shift to ban organics from coming into landfills, which offers opportunities for anaerobic digesters to handle that waste.”

The Minnesota Project in a major study on farm digesters reported that the United States has 126 anaerobic operations producing electricity. Hometown Bioenergy is one of the first, if not the first, to produce electricity from waste in Minnesota.

In some cases biogas is being used to replace natural gas, too. The Metropolitan Council Environmental Services added a solids processing facility at Blue Lake Wastewater Treatment Plant in Shakopee that opened in 2012.

By being able to replace as much as 80 percent of the plant’s natural gas needs with methane biogas the Met Council saw a savings of $500,000 annually. The biogas facility also fuels hot water boilers and provides other advantages that reduce the need for natural gas purchases.

The federal government in August issued a new “biogas roadmap,” he said, that calls for creation of 11,000 more digesters, up from the 2,116 that exist today. By reaching that total the nation could see enough methane to power three million homes and fuel 2.5 million vehicles.

Several Northeast states have implemented new regulations banning food waste from landfill sites, Greene said, with Massachusetts’ new law starting in October. New York City businesses that produce more than one ton of food waste a week must divert that to something other than a landfill, he said.

Larger producers, such as hotels, can no longer send their food waste to landfill sites, leaving a potential for entrepreneurs to come in with an anaerobic digester solution. Agencies in the Northeast, he added, are offering financial encouragement for developers.

Anheuser-Busch, for example, uses a “beneficial energy recycling system” that takes brewery waste and makes methane gas that is reused in plants for heating, he said.

The St. Paul Port Authority has invested $1.3 million in digesters that began when the RockTenn paper recycling plant was threatened with closure, said Klein. Although he points out that RockTenn will not use the biogas from digesters directly, the Port Authority will receive carbon credits while “producing an economic benefit” to those communities.

For now, however, the investments have yielded only one completed project, Klein said. Full Circle Organics in Becker has been operating since June and collected several thousand tons of organic material, according to an article in the St. Cloud Times.

The carbon credit market may be struggling, but the Port Authority believes it will rebound, he said. In the meantime, food processors would benefit by having anaerobic digesters and be more competitive by having to pay less for their energy, he said.

“The country has to look at what Europe is doing,” he said. “There is a value to it if you can separate waste out — you can produce energy from it. If you just put it in a landfill it will create methane, anyway, which is a harmful greenhouse gas. The landfill companies have these collection systems but they don’t really collect all the gas.”

The Port Authority has offered a proposal to the state to create a state-sponsored fund to promote $80 million in investment in five large scale anaerobic digesters at wastewater treatment facilities. Although it has yet to pass the legislature, Klein said the effort will continue.

Challenges to the industry

Digesters have many logistical issues, said Dillon, more perhaps than other renewable projects. They require a steady feedstock, odor control to avoid complaints from neighbors, loading areas for trucks dropping off biomass, and various anaerobic equipment to capture methane production and deal with leftover biomass.

Financing is a large issue for digester developers since each product has many moving parts. Market conditions are not all that favorable now because of low natural gas prices, said Brandt. The federal financial incentives often renew annually, making it difficult for developers to convince financiers that two years down the road the 30 percent tax credit will still exist.

Would-be developers who want to proceed will need some key elements to shake out just right — high landfill prices or high energy costs or regulations regarding organic food waste. A good mix of one or the other make the economics work, Greene adds.

Still, interest has increased. “The commercial merchant vision is growing,” he said. “They’re seeing the ROI as favorable for many of these projects.”