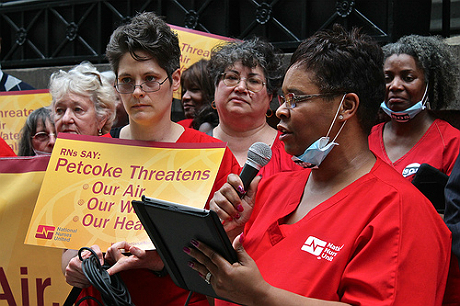 Members of National Nurses United protest petroleum coke storage in Chicago in May. (Photo by Bob Simpson via Creative Commons)

“Whatever it is a nurse can do, I probably have done it,” says Beverly Van Buren, an operating room nurse at St. Louis University Hospital who has also worked in nursing homes, podiatry, the military reserves and other posts in her nearly four-decade career.

“And I have loved it – it has been a fantastic journey,” she said.

The latest stage of Van Buren’s journey features a growing mission among nurses nationwide: the pursuit of environmental justice, fueled by a growing awareness of the environmental factors that could be linked to, causing or exacerbating the cancers, respiratory ailments or other conditions that affect their patients.

Nurses have individually become increasingly aware of the role of the environment in health, and over the past two years the National Nurses United labor union has launched a concerted campaign to mobilize on environmental justice issues — including the role of fossil fuels in both local pollution and climate change.

On September 21, a contingent of NNU nurses from around the country will join the People’s Climate March, which is expected to draw thousands to New York City. Meanwhile in various Midwestern cities, NNU nurses are taking prominent roles in local fights around the impacts of dirty energy.

“We’re trying to do the nuts and bolts front-line thing for our patients, putting our nose to the grindstone to do the basic things,” said Lara Norkus-Crampton, a registered nurse in Minneapolis. “But at some point you look upstream and think, where are the younger cancers coming from, why are these asthma rates climbing, why are we seeing so much more of these chronic things.

“The ultimate responsibility is to the sick person in front of you, but then with some wiggle room you can look around and say, ‘Are there things we can be doing better to not make people sick?’”

For more than a decade, the NNU has been doing relief work after natural disasters such as Hurricane Katrina through their project called RNRN – Registered Nurse Response Network. The NNU is the largest labor union of nurses in U.S. history, the union says, with 185,000 members nationwide.

Fernando Losada, NNU director of environmental health and climate justice, explained that they saw these storms as “extreme freak events that society wasn’t capable of responding to, so we saw it as a social political problem.” As they grew to better understand the impact of climate change, their view of such events shifted from relief work to climate justice.

In early 2013, the NNU officially took a stand against the Keystone XL pipeline, one of relatively few major national unions to do so. Now the national union or local affiliates are active on a wide range of energy-related issues including fracking, tar sands refinery expansions, coal exports, the transport of crude oil by rail and petroleum coke (petcoke) storage.

The NNU has partnered on various campaigns with national groups including 350.org and the Natural Resources Defense Council, and their members and affiliated unions also work with community groups on local struggles.

“Nurses see the effects of environmental injustice in terms of its direct health effects on people – they take care of the kids with leukemia, the babies with asthma, the adults with pulmonary disease,” said Losada. “It’s very apparent to nurses who work in particularly affected areas that there’s a fundamental health problem, not an individual but a collective social health problem.”

Van Buren has become increasingly concerned about the impact of archaic coal-fired power plants in the St. Louis region, as well as potential water and air contamination from coal ash landfills. With help from the Sierra Club and other local activists, she is learning about the issues and sharing the information with others among the 600 union nurses at her hospital.

“It’s more and more about the coal plants, mining, the toxic ash,” she said. “I have been doing a lot of reading about the arsenic level, how it affects infertility. About kids with asthma, things that can all be generated by pollution affecting our water and air. There’s a lot of money being made – they should take some of that money and generate better jobs, just cleaning up this stuff could create jobs.”

Van Buren said that since the nurses at her hospital unionized and signed their first contract last year, they have a new-found sense of cohesiveness and empowerment that could also carry over to environmental campaigns. Since she is “an old nurse” with grown children and more time to devote to meeting with legislators and other forms of environmental activism, she is trying to take the lead in local campaigns.

“I see how important it is for the future,” she said. “It’s about what will we have left for my grandkids and kids?”

An incinerator in Minneapolis

Norkus-Crampton is a leader in the fight against the Hennepin Energy Recovery Center waste-to-energy facility in Minneapolis, which opponents fear is releasing unhealthy levels of toxic emissions. The incinerator imports trash from other places if locals don’t produce enough to fulfill its contracts with Xcel Energy. Starting in 2009, the incinerator spent years seeking to expand.

As a “proud member” of the Minnesota Nurses Association, an NNU affiliate, Norkus-Crampton led the union in passing a resolution opposing the incinerator’s expansion. The expansion plan was eventually tabled, but now Norkus-Crampton is campaigning for a “zero waste” plan for the city that would curb the incinerator’s operations. She has done much research on the health effects of mercury and other emissions from the incinerator, sharing her findings with elected officials, other nurses and local residents.

Given their academic and medical training and their day-to-day experience, nurses have an opportunity to bring a level of moral and intellectual authority to debates over environmental issues.

“The spin factory works overtime on this stuff, people get very confused,” said Norkus-Crampton, who previously served on the city’s planning commission. “Since these companies have such a national and international presence, it’s really important there are public health networks, and health professional networks to help provide facts. Nurses like evidence-based best practices. If you’re going to say this is the best you can do, we’re going to want to see your evidence.”

For example, she points to a survey by ICF Consulting that shows significantly higher energy savings from reusing different types of paper, plastic and cardboard than the energy generated if that material is incinerated.

“They market [waste-to-energy] as such a great use of a resource to make energy with stuff that would go to a landfill,” she said. “But you need to think about how much you could save by reusing these things versus starting over mining and harvesting materials and then burning it for its caloric value.”

In Chicago, NNU nurses have been heavily involved in the grassroots campaign to regulate or remove piles of petcoke stored adjacent to residential neighborhoods on the city’s Southeast Side. Some of the nurses live in the area themselves, others come from around the city to march and rally with local residents.

The connection came about in part thanks to Elizabeth Lalasz, a nurse for the county health care system who lives in the Pilsen neighborhood, where a coal plant was considered a major public health threat until it closed in 2012.

Lalasz had known Olga Bautista, a community leader in the petcoke fight, for years including from working together on massive immigrants rights marches in 2006.

The Chicago affiliate of the NNU does continuing education for nurses, including a focus on environmental issues. Lalasz participated in an environmental justice training by the union in July, and she’s now completing a curriculum developed by the NNU covering petcoke, fracking, tar sands and other contemporary environmental justice issues, complete with questions for reflection and analysis.

Environmental justice was a focus of a conference of union nurses in San Francisco in summer 2013; where Lalasz was among those who walked across the Golden Gate Bridge in opposition to the Keystone XL pipeline.

Lalasz is also an activist on workers’ rights issues, and she hopes the union nurses can help dismantle the framing of “jobs versus the environment” that surfaces in many debates including around the Keystone XL. She was part of a panel about environmental justice at Labor Notes, a national progressive labor conference in Chicago in April.

“It’s still very difficult” to win union leaders and members over to environmental causes, she said. “As much as the economy is recovering, people are struggling.”

Meanwhile, especially in a city like Chicago, Lalasz notes, “There is a certain weight that unions carry, when it comes to actually having some political sway and building a movement. It makes it more difficult for politicians to think it’s just some people agitating, even though community members have every right to agitate. Nurses are the most trusted profession in polls over and over and over again.”

Losada said that convincing other unions to embrace climate justice and environmental justice is “slow going,” especially with the building trades unions that get work building refineries, power plants, pipelines and the like. He said the NNU makes it a priority to support union Locals who are taking pro-environment stances even if their national or international union is not.

“Advocating for the destruction of the planet is not the role labor should be playing,” Losada said. “We understand it’s complicated for some of these unions that represent workers in these industries. But in other countries there are unions that have transitioned out to take positions on clean energy. Part of our role is to educate other parts of the labor movement by example.”