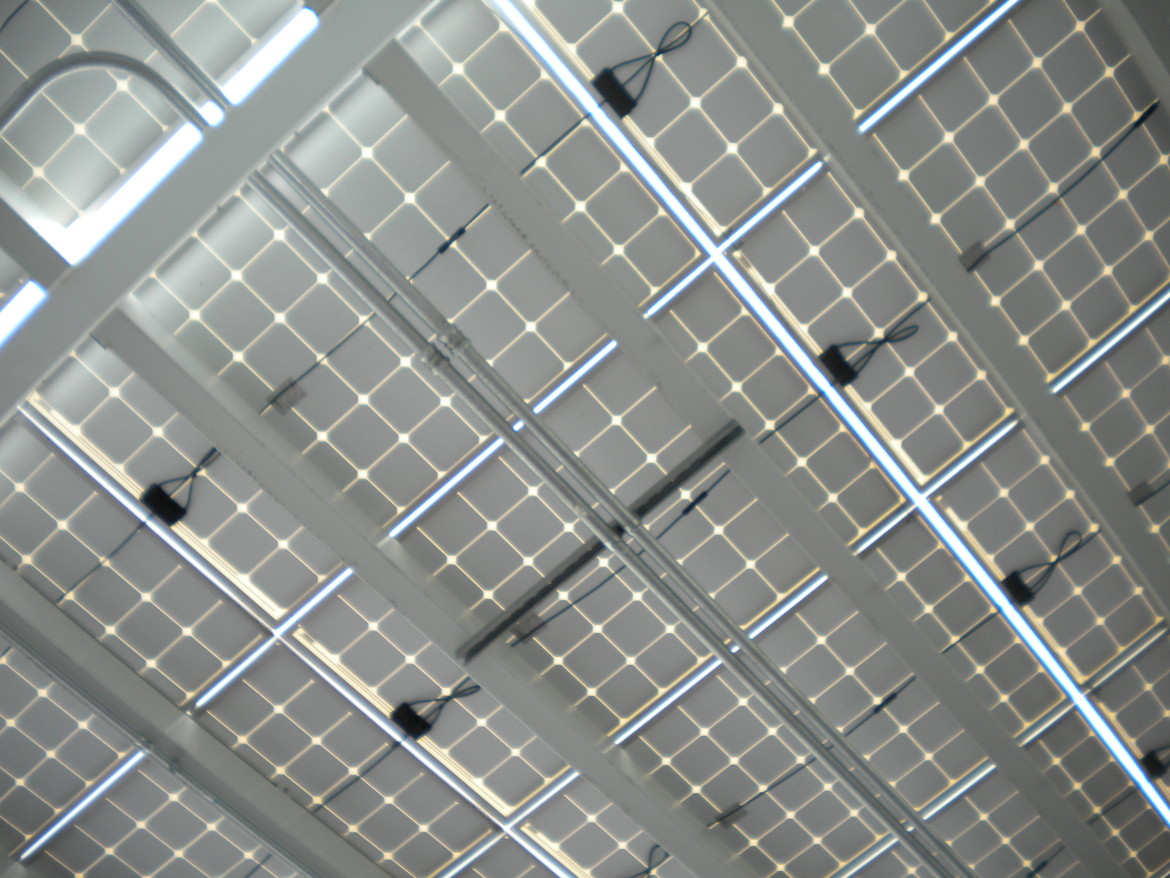 Ohio SB 310 has already made it hard to finance any new solar projects in the state similar in scale to the Melink solar array at the Cincinnati Zoo. Photo by Kathiann M. Kowalski.

Ohio’s market for solar renewable energy credits (SRECs) dropped dramatically after Senate Bill 310 passed this spring and has not rebounded since. Yet official state reports won’t reflect that and other changes for some time.

The lag means the Energy Mandates Study Commission set up by SB 310 could wind up using unreliable data to evaluate compliance costs for the state’s energy mandates. The Ohio Senate’s half of its 12 voting members was named on Tuesday.

Four of the six are Republicans, including Cincinnati-area state Sen. Bill Seitz, who has previously pushed for canceling any additional requirements under Ohio’s energy efficiency and renewable energy standards, and SB 310 sponsor Troy Balderson of Zanesville.

“It’s just the escalations that are frozen,” noted Stuart Siegfried, an environmental specialist at the Public Utilities Commission of Ohio (PUCO). “The requirements remain.”

However, SB 310 does not delay other changes to the standards. Provisions coming into effect now include removal of an in-state requirement for solar and other renewable energy and a broader scope for what counts for energy efficiency.

Moreover, the PUCO has not yet decided how it will apply the changes.

FirstEnergy and some other commenters want the PUCO to apply them retroactively to all of 2014. If that happens, electricity suppliers would not necessarily need any in-state RECs or SRECs for 2014 or later years.

“SREC prices are like a future expectation of what the market is going to look like at the end of the year,” said Eric Scheier, a portfolio analyst with Sol Systems. The solar financing and investment firm is headquartered in Washington, D.C.

“We saw prices fall” as soon as the Ohio legislature passed SB 310, Scheier continued. Within a few weeks, prices plunged from roughly $60 to $70 per Ohio SREC to between $20 and $30. “And that’s still where it is right now.”

That’s assuming the credits are being traded at all, added Sara Rafalson, also at Sol Systems. SB 310 didn’t just freeze the renewable energy targets, she says, “it also really froze the market in the trading.”

Indeed, checks on the Flett Exchange earlier this week showed $0 being bid for Ohio-sited SRECs.

“When you’ve got zero there, people aren’t coming to the market because they don’t think they have to,” said Scheier.

SREC prices weren’t all that fell. Overall growth in the state’s solar industry slowed dramatically too.

“Projects were put on hold almost immediately,” explained Scheier. “You’ve got numbers on growth in Ohio and some of the surrounding states that look like they did in 2010 and 2011.”

“It’s like Ohio is taking one step backwards compared to a lot of markets,” said Rafalson

New solar resources in Ohio dropped below 100 kW per month when the bill passed, Rafalson noted. Previously, the six-month average growth in Ohio’s solar generation had been at the rate of 1 MW or more per month.

It would be “very challenging” to finance new solar projects in Ohio right now, she added, especially since other markets in the Midwest are growing more vigorously.

Melink Corporation in Milford, Ohio, is already shifting its business focus. The company’s previous solar energy projects in Ohio include a 6,400-panel array at the Cincinnati Zoo.

“All the companies that had started up and were trying to revolutionize our advanced energy economy in Ohio are feeling the effects” of SB 310, said company president Steve Melink.

“Solar projects are coming to a halt” in Ohio, he noted. “We don’t see more projects being developed at this point that I’m aware of.”

“In order to develop a project, you need to have all your financing in place for the duration of the project,” Melink explained.

That financing would include any money from the sale of SRECs. Now, though, “If you were to go and try to sell SRECs to a utility, they would almost laugh at you.”

In the wake of SB 310’s passage, Melink and other companies have been depending on opportunities outside the state.

“Indianapolis, a city just two hours away in driving time from Columbus and Cincinnati, is one of the largest markets for solar,” Melink noted. The company has just completed two large projects there, which were supported by a feed-in tariff.

“And here in Ohio we’re saying oh, we can’t do it,” Melink added. “It shows, I think, that Ohio is heading backwards.”

The combined impact “has to be a tremendous blow to renewable energy in Ohio,” noted Martin Kushler, a senior fellow at the American Council for an Energy-Efficient Economy (ACEEE). The energy efficiency sector and customers who benefited from it will suffer too, he said.

Impacts could be even more severe in light of SB 310’s announced intent “to minimize government mandates.” The statute sets up a committee to review the costs of the renewable energy and energy efficiency standards. The committee must present a report to both houses of the General Assembly by or before September 15 of next year.

“You’ve got pretty outspoken people in the legislature who’d like to kill all these standards,” Kushler said. “Until that gets firmed up one way or the other, I can imagine that it’s putting a chill on more renewables in Ohio.”

High costs were a common refrain for supporters of SB 310 during the legislative debates. And the law directs the Energy Study Mandates Committee to focus on costs during its review.

It’s not yet clear whether the committee will consider the full extent to which customer savings, economic development benefits, and other factors offset any costs.

It’s also not clear how much information the committee will review on differences between in-state and out-of-state energy sources.

The most recent draft PUCO report for 2012 shows that the average costs for in-state solar and other renewable energy were indeed higher than those from out of state. The same holds for the PUCO’s final report for 2011. Reports for last year are not yet available.

“It’s in part a lag that’s built into the process,” Siegfried explained. The PUCO relies on compliance reports filed by utilities and other retail electricity suppliers. Those reports aren’t due until several months after the year ends.

Even when the PUCO’s public reports come out, price data is limited. The PUCO provides only average figures for amounts paid for in-state and out-of state credits.

Also, the PUCO previously found that at least one utility, FirstEnergy, overpaid for RECs for 2011. If the Ohio Supreme Court upholds the case on appeal, it means that the average in-state price for utility-purchased RECs should have been lower than the PUCO’s report shows for that year.

The SB 310 study committee might also resist comparing the costs of any renewable energy or energy efficiency mandates with added costs from other forms of energy.

For example, FirstEnergy, American Electric Power and other Ohio utilities want the PUCO to approve plans that would charge all distribution customers for the cost of purchasing electricity from various older, coal-fired power plants — even when the cost of that electricity would exceed the going market rate.

“The biggest argument by the utilities and some lawmakers is that clean energy is more expensive than dirty power,” Melink said. “But I would say that dirty power is not cheaper. It’s actually more expensive, and we’re paying for it through increased infrastructure costs.”

“I know there will be a lot of resistance,” Melink said. “But I think it’s another inevitability that these regulations are going to make their way into laws here in Ohio.”

“I would propose that, if anything, we up our game” with increased targets, Melink added.

Even without legislative action, though, Melink hopes cities and other electricity consumers will demand more solar power and other advanced energy in Ohio.

“This opportunity and need is too great for us to just sit idly by,” Melink said.

ACEEE is a member of RE-AMP, which publishes Midwest Energy News.