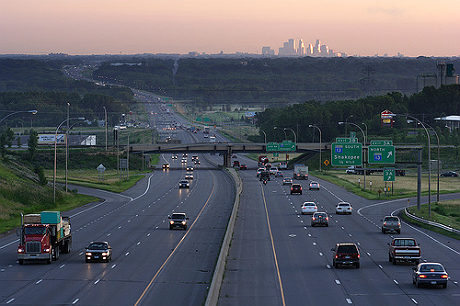 (Photo by 36ViewsGuy via Creative Commons)

A unique data project in Minnesota is giving city leaders a clearer picture of how their residents use energy.

For instance, conventional wisdom would suggest that densely populated Minneapolis and St. Paul would use the least energy per capita in the Twin Cities metro area.

However, it’s actually Hopkins, an inner-ring suburb near Minneapolis, followed by Falcon Heights, a small burg on the edge of St. Paul, that take the top spots (the most energy-intensive is Lake Elmo, a largely rural exurban community).

That’s the kind of micro-data on Duluth, Rochester and 20 Twin Cities communities that can be found on the Regional Indicators Initiative (RII) website. The RII offers data on energy, water, waste, vehicle miles traveled and global greenhouse gases.

No other urban area in the country has anything like the RII, said Rick Carter, who oversees the program and is senior vice-president of LHB, Inc.’s Minneapolis office.

Phillip Muessig, co-director of the Minnesota Pollution Control Agency’s Greenstep Cities program, said the RII reveals accurate data can now be captured at the community level and displayed in a way policymakers and citizens can understand.

“I think that the fact you can show the data and make it interesting makes people look at it and think ‘wow, that’s pretty cool,'” he said. “Only a few big cities have ever had anything like this before.”

One user has been Peter Lindstrom, mayor of Falcon Heights (pop. 5,300). He likes that the data can be parsed into commercial/industrial and residential because he has two large enterprises in the city — the Minnesota State Fair and the University of Minnesota’s St. Paul campus.

“Those two enormous institutions are energy and water hogs,” he said. “If we were not able to break out between residential and commercial/industrial it would be hard to know if our programs were making a difference or not.”

No Falcon Heights council meeting passes without representatives comparing the city to others in terms of property taxes or sanitary fees, Lindstrom said. The RII allows the council to look at sustainability, too, and how Falcon Heights compares.

“I am a huge fan of the Regional Indicators Initiative,” he added. It’s been a tremendous asset for communities like ours, in general, and for Falcon Heights. It’s been helpful in a number of areas.”

Rolf Nordstrom, executive director of the Great Plains Institute, agrees that more detailed data will help cities understand whether they are moving in the right direction in meeting Minnesota’s goals for reducing carbon emissions, water use and waste.

“This kind of information is critically important,” said Nordstrom. “Minnesota has laws with a number of goals for reducing greenhouse gases by 80 percent by 2050. Without this kind of data how will be know if we’re getting better or worse?”

RII began as a way to track the progress of communities participating in Minnesota’s GreenStep Cities program. GreenStep Cities agree to implement 28 best practices that will cut energy and water use, curtail waste, improve transit, water quality and other sustainability components.

The pilot launched in 2010 with the Twin Cities suburbs of St. Louis Park, Falcon Heights and Edina. By 2013 the RII broadened to 19 additional cities. The data stretches back to 2008 and comes from online resources, with energy data coming from utilities.

The full impact of the RII is yet to be seen, but Carter has high hopes.

“I think the biggest impact is the Met Council has created a policy directive on climate change and it is planning to incorporate mechanisms within the comprehensive plan for 2040 and its ‘Thrive MSP 2040’ process,” he said. “They have specifically referred to the Regional Indicators as a potential tool to use as a monitor.”

In terms of surprises, Carter said there have been few. Energy consumption decreased in 2008 to 2010, went back up over the next three years. The lower energy use was more of a result of the economy than energy consumption, he said.

“The amazingly wide range of water consumption from city to city surprised me — it ranges from under 40 gallons to over 110 [gallons per day],” he said. “Sometimes you wonder if something is wrong with the data but it’s accurate. That surprised me.”

Less surprising, though, the data show that the more dense a city, the lower the energy and water use and vehicle miles traveled by its residents.

Cities pay $500 a year to participate, and those dues cover a quarter of the cost of program. The Commerce Department, the PCA, the Urban Land Institute and the Great Plains Institute take care of the rest.

In fact, the success of the RII may lead the GreenStep Cities program to add data collection as a fourth tier of recognition for cities. The Great Plains Institute’s Amir Nadav, who serves as co-director of GreenStep Cities, said the program offers three levels of achievement for communities as they meet sustainability goals.

The GreenStep Cities program offers a Step One  recognition for simply passing a city resolution to join the program. Step Two is triggered by adopting several four to eight practices while Step Three cities have to have deployed from 12 to 16. The number of best practices a city has to complete depends on its population. The Minnesota League of Cities recognizes GreenStep Cities at its annual June conference.

Another effort involves “reduction wedges” that communities could use to decrease greenhouse gases, water use and improve in other areas.

A wedge is created in RII when charting energy use, for example — the line showing energy use has generally risen while the state’s energy mandates call for that line to decline, said Muessig.

LHB is working on templates that cities could employ to determine how a particular strategy would impact their carbon emissions. If 25 percent of a city’s commercial businesses reduced energy consumption by 20 percent, the resulting carbon decline would be revealed by calculations available in the template, he said.

Communities would be able to select from a variety of wedges before deciding which to take action on.

“If a city is really going to decrease community carbon use how to you get there?” said Muessig. “You need some rough numbers before you sketch out a scenario. That’s really the end game, I think.”

A real example comes from Lindstrom, who said Falcon Heights instituted a consumption-based fee for sanitary sewer service rather than a flat fee and saw an 11 percent reduction in usage. Although the city tracked the decline, it also showed up in the data on the RII website, he said.

More immediately, the RII plans to add six other Minnesota cities, among them Mankato, St.  Cloud, and Bemidji, said Nadav. Their addition will add information on energy use and other sustainability measures in different parts of the state and in communities of varied sizes, he said.

The RII will likely be moved to the PCA or another state agency at some point in the future, Muessig noted. Ideally, the Metropolitan Council, a regional planning organization for the Twin Cities, could take it over and use the data to help guide its “Thrive” plan, which sets long-term sustainability goals for the metro area.

If that happens in next few years, the RII data could be used to help cities describe their sustainability efforts in the comprehensive plans they must submit to the council periodically.

“That would be spectacular,” he said.