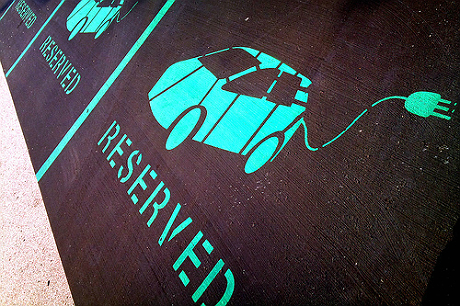 Despite its automotive legacy, Michigan is behind its Midwestern neighbor states in establishing a better market for electric and other alternative-fuel vehicles, according to a recent report by clean-energy experts.

“Michigan’s auto history, manufacturing expertise and legacy of innovation in the personal transportation sector position it arguably better than any other state in the country — or any other place in the world — to be the dynamo for these advanced transportation policies,” said Joshua Rego, project associate at the Clean Energy Coalition who co-authored the report. “I believe there needs to be an effort for us in Michigan to lead and not be led.”

“We really should be at the top,” added the coalition’s Allison Skinner, another author of the report.

The Clean Energy Coalition’s report, “Alternative Fuels: A State Policy Analysis,” sifted through over 900 statewide, local and utility-based policies in all 50 states and Washington D.C. It found that states with policies that target the residential sector and that start on a local or utility level are more likely to have a higher number of AFVs per capita. It also found a patchwork of policies across the country.

“This piecemeal approach to policy has undoubtedly been one of the contributing factors to significant differences in AFV adoption rates across the nation, and a cause for hesitation in investment by the commercial and residential sectors,” the report says.

Moreover, the report focused on policies for compressed natural gas, propane and electric vehicles because vehicles that run on biodiesel and ethanol can also use convention fuel, “making it difficult to determine how use of these fuels may be impacted by policy,” the report says.

When considering those other “clean fuel vehicles,” Rego said, Michigan drops from 17th to 41st in the country for clean vehicles per capita. Yet the Clean Energy Coalition ranks Michigan second (only behind Kentucky) in clean-fuel sector employment. Why the gap?

“It’s a number of things,” Rego said. “A big portion is things like political and legislative support for these technologies.”

It was ‘important to our clients’

Based in Kalamazoo, Michigan, recycling company Schupan and Sons claims to be the first in the country to convert its entire fleet to natural gas-based vehicles, replacing 350,000 gallons of gasoline with natural gas every year.

The company did so in 2005 and consults for others looking to do the same, said Chris Milani, vice president of industry and public affairs at Schupan.

“We could reduce our emissions significantly, which was important to our clients,” Milani said. “We could lock in long-term fuel costs, which we couldn’t do with petroleum. It gives us stability.”

Milani said the cost of fueling with petroleum made up roughly 20 percent of the company’s operating expenses. Converting its fleet to natural gas brought it down to 12 percent, he added.

“That savings gets passed along to our customers,” he said.

However, a report last month in the Wall Street Journal said that sales of natural-gas trucks nationwide, when compared with sales of diesel-powered trucks, have not met up to expectations.

The Clean Energy Coalition report found that AFV manufacturers are shifting operations to states with more favorable policies toward businesses and consumers who’d want to buy them.

Rego said that large, national companies — whether they deliver beverages or work in telecommunications — are “deploying these vehicles in states with incentives, because why wouldn’t you?”

Skinner said states like Oklahoma and Indiana are focusing policies on natural gas and ethanol-based vehicles, respectively, because they’re “promoting what their state is producing. When you look at Michigan, we’re not really promoting our product, which is our vehicles.”

Milani said that of roughly 11,000 heavy-duty vehicles planned to be sold in 2014, less than 100 are coming into Michigan.

“Where major corporations are deploying natural-gas trucks are to areas that have incentives to encourage competitiveness of those fleets in those markets,” he said.

As the report sheds light on a lack of statewide policies here, legislators are taking note.

“I think there’s room for improvement. That’s what the plan is,” said state Rep. Gretchen Driskell, a Democrat from southeast Michigan. “I think we’re behind on introducing the support and legislation to support Alternative Fuel Vehicles in this state. As a leading automotive state in the country, we should not be at the bottom half — we should be at the top half. It’s a great economic opportunity.”

It’s still unclear what policy changes may take shape here, though. The report was first in identifying where there may be gaps, Driskell added. She and state Sen. Mike Kowall, a Republican from metro Detroit, were involved in the report’s release in Lansing this month and a staffer from Kowall’s office said he’s interested in the issue. Driskell said there are plans to start an “automotive caucus” within the Legislature.

“It seems there are some opportunities for us to support this emerging industry better legislatively,” she said.

Skinner, of the Clean Energy Coalition, said that states ranking high with the number of AFVs per capita are not all known as politically progressive. While the top 10 includes California and Hawaii, Nevada and Utah are also ranked high.

“States understand that this is a non-partisan issue,” she said.

Rego added: “There’s a tendency for these to be looked at — Alternative Fuel Vehicles, clean fuels — as strictly an environmental issue. But it’s a national security issue, economic and job creation issue and domestic manufacturing issue. It also happens to be an environmental issue, but too often these technologies are viewed as a one-horse show.”