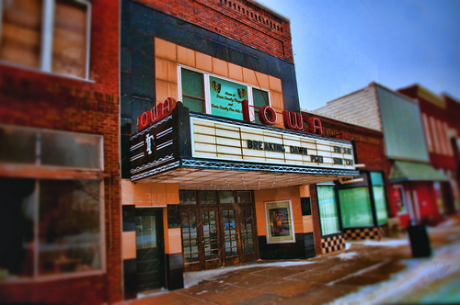 Bloomfield, Iowa could save millions on utility costs through increased efficiency and renewable energy, according to a new study. (Photo by Pete Zarria via Creative Commons)

A pair of Iowa studies found that both utilities and their customers in small towns can substantially cut costs if they invest in deep efficiencies and, to a lesser extent, in renewable sources of generation.

The analyses, done by energy consultant Tom Wind and the Iowa Association of Municipal Utilities with some funding from the Iowa Economic Development Authority, explored whether the communities of Bloomfield and Algona could become energy independent.

The conclusion: in about 15 years, Bloomfield could get to net-zero — generating as much energy as it consumes over a year — but not necessarily always at the times needed.

Algona could get about half that far, cutting current electricity use by about 50 percent.

The study’s authors did not pursue the possibility of greater reductions in Algona because the municipal utility there is a partial owner of a coal-fired plant in western Iowa, and the utility’s management made it clear that that investment puts constraints on how aggressively it will seek to reduce power sales.

“We did pick two utilities with very different scenarios with power supply,” said Joel Logan, energy-services engineer for the Iowa Association of Municipal Utilities and one of the studies’ authors. “They came out with similar results, so I think that does indicate that it’s likely that others would see similar results as well.”

Both studies found that the aggressive pursuit of efficiency measures, along with direct load control and extensive development of renewables in one or both cases, in a few years actually would both cut bills for customers and reduce costs for the municipal utilities in those communities, compared to continuing “business as usual.”

“What the Bloomfield study pointed out to me – and this is the first time I’ve seen this in a study — is the declining cost of renewable energy,” said Wind, an Iowa-based electrical engineer and energy consultant. “It’s come to the point where it’s crossing the escalating cost of fossil fuel.”

Anne Kimber, director of energy services for the Iowa Association of Municipal Utilities, said that studies for the two communities arrived at essentially the same conclusion: “You can lower customers’ bills through aggressive efficiency, demand control and judicious investment in renewables.”

How the studies worked

The Bloomfield study projects that a decade-long push for efficiency could cut current electricity consumption by 23 percent. It also envisions the city’s municipal utility installing direct load-control equipment, and using it to interrupt air conditioning and water heating at times of peak use. That, in turn, would save the utility from having to purchase power when it is most expensive.

The analysis projected that 10 years of aggressive efficiency investments in Algona would cut power use by 14 percent. It did not recommend load control measures in Algona, however, as they actually added to the expense.

In addition, the studies present three renewables scenarios, which are labeled low-, medium- and high intensity. In the case of Bloomfield, they would reduce the city’s wholesale power purchases by 50, 75 and 100 percent by varying the amount of solar and wind capacity installed. The study’s authors contemplate solar installations of 6,800, 8,900 and 11,400 kilowatts respectively, along with one or two large wind turbines and some micro-turbines in one case.

“I suspect the federal production tax credit will be renewed maybe one more time, long enough for Bloomfield to contract for some wind energy,” he said. “The solar subsidy….I’m not sure that’s the case. There’s a band of uncertainty around all of that information.”

Absent those subsidies, he said, the scenarios he outlined are much less viable.

What’s not uncertain, however, is how Algona’s wind-energy production would match up with its electricity use. Wind was able to make a very detailed assessment of the hour-by-hour electricity demand, as well as the potential generation from wind and sunshine.

Fifteen years ago, a two-megawatt wind farm was installed near Algona. Since then, hourly data has been collected on how much power the turbines have generated, and how much power has been demanded of them. That provided Wind with a very precise idea of the extent to which a couple of additional wind turbines would meet the actual demand for power in Algona.

He used the Algona readings as a basis for modeling probable wind-energy production in Bloomfield. Bloomfield is in southeast Iowa, Algona in the north-central part of the state. Wind used a solar calculator devised by the National Renewable Energy Laboratory to estimate how often and how brightly the sun shines in each of the locations.

“We know we’re generally going to have pretty good solar production in the middle of the day,” said Bob Haug, recently retired as IAMU’s executive director. Given that the cost of purchased power generally peaks in the mid- to late-afternoon, he said, “It’s a pretty good fit.”

‘The first and best investments’

No one is suggesting that either Bloomfield or Algona could eschew the grid and the larger power system altogether, though.

“We know that over 15 years, we will have years of very low coincidence of wind and solar generation and peak demand,” Haug said. “At those times, we will purchase power from the grid.”

While it appears that, after a few years, distributed generation would reduce costs for both the utilities and their customers, the three scenarios in each of the studies that include some quantity of renewables are not the best, from a strictly financial vantage point.

“Efficiency and load control are cost effective,” Wind said. “Those are the first and best investments a utility can make.” For that reason, the authors strongly urge both Bloomfield and Algona to hire staff dedicated to getting all power customers to invest fully in efficiency.

In the case of Bloomfield, Wind estimates that the utility’s operating costs for the next 15 years would total about $58 million under current conditions. With significant investments in efficiency, that would drop to $55 million. With direct load control and peak shaving, operating costs would total about $52 million. With increasing amounts of renewables, the figure would gradually rise to about $53 million, $55 million and $56 million. However, all six scenarios that he devised would cost less than the utility continuing on its current path, he said.

Costs for the Algona utility would total about $196 million under the current scenario, and range between $188 million and $190 million with some efficiency and possibly the addition of some amount of renewables.

On the customer side, Wind estimated that in Bloomfield, efficiency improvements would cut the average monthly bill by $15, and that adding load control and peak shaving would result in a typical monthly savings of $25. Adding renewables in increasing amounts would reduce the savings to $21, $15 and $11 a month. But even so, after a few years, the cost to customers would be less than the status quo.

In Algona, monthly projected savings for the customer were $16 without renewables, $14 with them.

In both communities, she said, “The board and leadership are interested in seeing how far this model can go. I think the next step is to work with the (Iowa Economic Development) Authority to see what funding sources might be out there to start making some of these investments.”

An earlier version of this story incorrectly stated that Bloomfield has installed LED streetlights and a district geothermal system; that Algona has an interest in a power plant in eastern Iowa; and that the studies assumed that wind energy production in Bloomfield would be comparable to that in Algona.