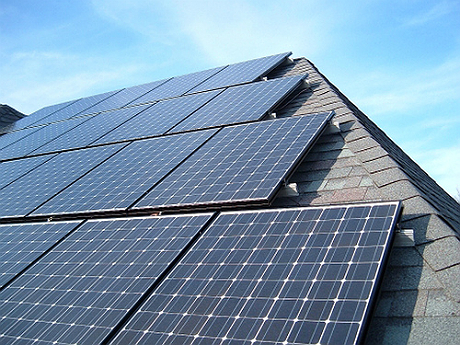 The cost of municipal solar permits varies widely and continues to be a barrier to wider and faster expansion of solar energy in Minnesota, according to a recent report.

The Sierra Club looked at 77 Minnesota cities and found that building permit fees for solar photovoltaic installations range anywhere from $0 to $531, or from 0 to 4.4 percent of the pre-rebate cost of a hypothetical $12,000 system. The average permit cost was $308.

“I think the report shows it really matters where you live in how much you’ll pay for your solar permits,” said Michelle Rosier, senior campaign and organizing manager for the North Star Chapter of the Sierra Club.

The primary driver of higher costs is the practice of including the cost of the solar panels in calculating the permit fee, she said.

The 64 cities that figure in a project’s total cost when calculating fees charged $333 on average while the 10 cities that did not had an average permit cost of $240. The result is that higher fees serve as a “disincentive” for homeowners to purchase higher quality, Minnesota-made solar panels from tenKsolar or Silicon Energy, Rosier said.

The fee can increase dramatically even as the electrical output stays the same. A homeowner installing a $12,000, three kilowatt PV system in St. Paul would pay $425 for the permit, the report stated. If the homeowner bought more expensive panels valued at $26,000 the permit fee would jump to $816 even though the work of the city permitting staff would remain the same.

The practice is not unusual or unique to solar — cities often assess permits based on the value of, say, an addition to a home or the construction of a new garage rather than the actual cost of the assessment itself.

But amid Minnesota’s initiative for utilities to produce 1.5 percent of electricity from solar by 2020, the Sierra Club believes more uniformity and smaller permitting fees might encourage more participation.

“One thing we’re clear on is we want to make to make sure a city can able to recover the cost of permitting and doing the inspections,” Rosier said. “The amount just should be based on the cost of that work and not the cost of the entire project…we think that would have little to no impact on the cost of the administration but a big impact on communities where homeowners want to install solar.”

Even though soft costs remain an issue they are actually a bigger factor in other states, said Laura Burrington, managing director of the Minnesota Renewable Energy Society. The problem in Minnesota — which the Sierra Club report highlights — is the inconsistency of solar permitting from city to city.

Using a federal grant, her organization, CR Planning, and the Clean Energy Resource Teams held several workshops and collaborated with 20 communities to help write model ordinances in 2012 and 2013.

Four communities adopted the ordinances while others are in the process of moving them forward.

“It often takes more than a year to get these things passed,” Burrington said.

With such differences between communities, solar installers tend to stay in urban areas where they know the permitting structure, she said. When they acquire clients in a new community they “will jack up the price to cover any mystery occurrence” involving an unforeseen permitting expense, said Burrington.

“We’re just not seeing solar in rural areas where they could really use it,” she said.

At least some solar installers have convinced city officials to forgo permitting based on the size of the project in favor of figuring in only labor costs. Dustin Denison, principal with Applied Energy Innovations, said on a $30,000 project he has asked city officials to separate charges for the solar permit, based on labor, and another for the electrical work.

Most of the cities in the Sierra Club study have made other improvements to help residential solar installers. Among those improvements, Denison said, is an expedited permitting process. Armed with a checklist of what the city needs for permitting and a deep knowledge of city solar codes, Denison and his staff have moved projects through permitting much faster than in the past.

His main problem today is that new clerks working for cities have little knowledge of solar permitting, which can still hold up the process, said Denison, who also serves as board president of the Minnesota Solar Energy Association (MnSEIA).

The Sierra Club offers three recommendations. One is to have the state Department of Labor and Industry tell building permit officials to consider excluding the cost of project when determining fees. Also, the city or state could provide an online platform for permitting and submitting fees. And cities could adopt Labor and Industry and the Department of Commerce’s standardized load table for solar thermal and PV installations.

The tables could reduce the cost of calculating rooftop PV loads and remove the need for a “Professional Engineering” stamp some communities require before approve a solar project. Denison points out structural engineers on his projects were once common and expensive, costing roughly $1,200 per project, he said.

Minnesota is moving in the right direction on solar and the point of the report was to serve more as a guide for helping communities make improvements on their permitting process, Rosier added.

“We’re making great process but soft costs remain a real issue in Minnesota,” she said. “They remain one of the biggest barriers at this point to seeing more solar installations.”