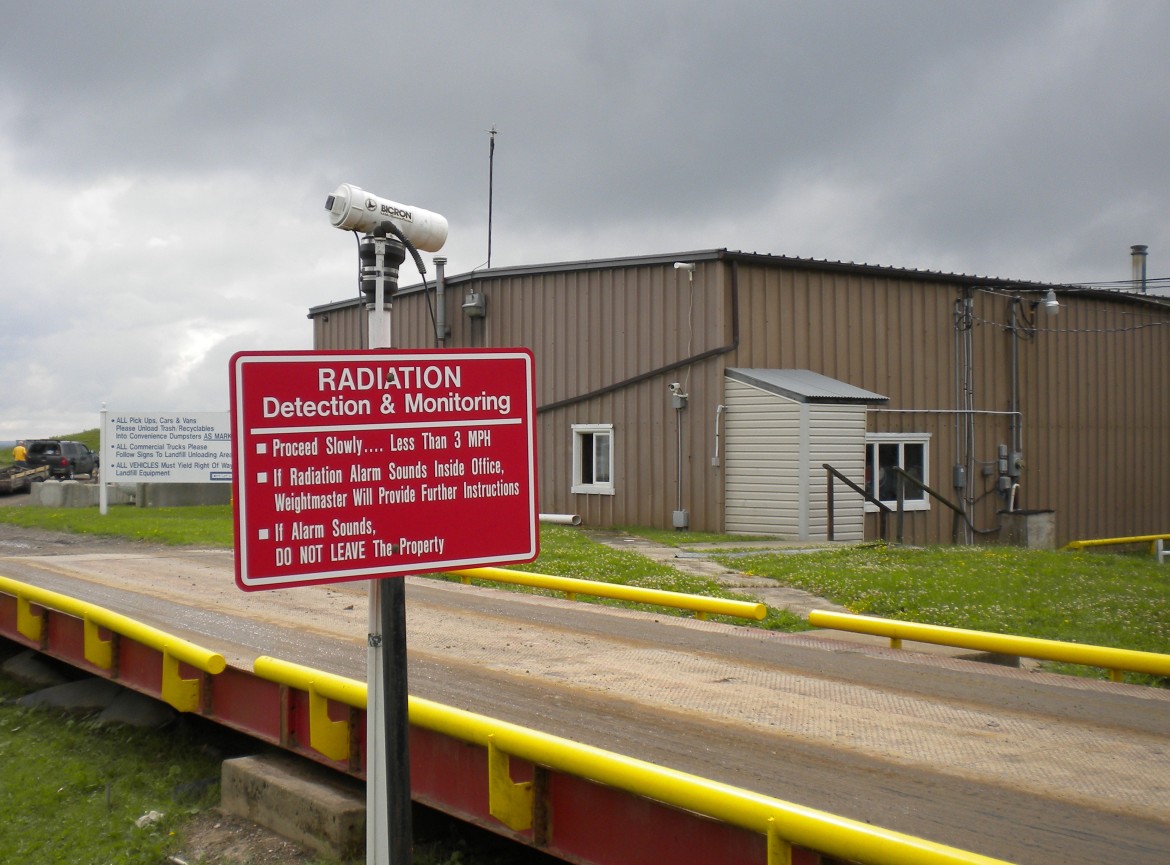 The McKean landfill in Pennsylvania has radiation monitoring for trucks bringing shale drill cuttings and other waste for disposal. Photo by Kathiann M. Kowalski.

While a recent federal study singles out Ohio for limited information requirements in permitting for fracking wastewater disposal, advocates in the state say the issue is much broader.

Ohio requires fewer details about the liquid fracking wastes going into its underground wells than other states do, says the General Accounting Office. Environmental groups say the situation is even worse because the state’s inspection and enforcement practices are lax.

Now the Ohio Environmental Protection Agency is considering whether to allow “beneficial reuse” of those shale drill cuttings, including on roads and in wetland restoration.

The waste fluid that flows back afterward and during well production can be more than six times as salty as seawater, according to the Ohio Department of Natural Resources (ODNR).

Deep shale layers in Ohio can also contain elevated levels of heavy metals. Radioactivity from radium is also a concern. Liquids can become contaminated by coming into contact with both types of materials.

Ohio was the only one of those states that does not require permit applicants to submit information characterizing the fluids they will inject into the wells.

Ohio regulations do define the types of fluids that can go into the injection wells, the report noted. The state had also done research on the characteristics of the state’s liquid waste from fracked wells, the GAO said. However, the report did not provide any detail on ODNR’s analysis of those fluids.

“In addition, according to state officials, Ohio…samples fluids injected into class II wells during well inspections,” the GAO report noted.

After reviewing “hundreds” of ODNR inspection reports, Rutz said he found “no indication at all” that inspectors had done any on-site sampling.

And when those reports do indicate violations, advocates say ODNR does not follow up with vigorous enforcement.

“We have repeat offenders across the state,” noted Brian Kunkemoeller of the Sierra Club’s Beyond Natural Gas campaign.

“They also don’t log whether or not a problem is fixed,” Kunkemoeller continued. “You don’t ever know if that violation is resolved or not” from reviewing the records.

Both Rutz and Kunkemoeller noted only one case in which ODNR permanently shut down an injection well operation after problems were found through an inspection. That case involved improper drilling that caused earthquakes in the Youngstown area.

ODNR did temporarily suspend injection at two additional wells in northeastern Ohio last month, pending further investigation. However, those suspensions didn’t result from routine inspections. Instead, they were a result of minor earthquakes that occurred shortly after ODNR gave permission for American Water Management Services to increase pressures at the wells.

Rutz noted that two key ODNR employees left the agency just weeks before the GAO report came out. Mark Bruce, a former ODNR media relations spokesperson, is now at the Ohio Oil and Gas Energy Education Program, which is funded by Ohio’s oil and gas industry.

Geologist Tom Tomastik had previously dealt with permit matters for ODNR. He’s now a regulatory specialist with ALL Consulting in Galena, Ohio. The firm’s website promotes its services to the oil and gas industry.

“We just continue to see evidence that the ODNR is a captured agency,” Rutz said, “but I hope that reports like the GAO’s will help reverse that.”

Oil and gas operations produce tons of solid waste too, including drill cuttings—the soil, rock fragments, and pulverized material that come out of a borehole.

Under Ohio law, drill cuttings can also have “a de minimus amount of fluid that results from a drilling process.” Most drilling operations in the state push rock cuttings back to the surface with a liquid slurry called drilling mud.

“Any time you drill down you’re going to end up with the same contaminants on the solid cuttings and muds as you would with the produced water or brines,” noted Rutz.

Ohio law sets out strict limits for disposal of any solid wastes from drilling that are TENORM—Technologically Enhanced Naturally Occurring Radioactive Material. In general, TENORM materials measuring more than the allowed limit must go to a special facility.

Last year, however, Ohio House Bill 59 declared that TENORM “does not include drill cuttings.”

As a result, drill cuttings can go to any permitted solid waste landfill.

“Anything that’s not TENORM does not have to be tested,” explained Melanie Houston, director of water policy and environmental health at the Ohio Environmental Council.

The law’s requirements “should be based on the radioactivity levels and not how you define it,” Houston added.

Disposing of drill cuttings is “a pretty elementary part of the process,” said Mike Chadsey, a spokesperson for the Ohio Oil and Gas Association. “It doesn’t really cause any issues—environmental or policy or otherwise.”

Existing safeguards for all wastes should be sufficient to deal with any concerns about shale drill cuttings, Chadsey said.

“Primarily, there are certain monitors at these [landfill] facilities that if the rock is too ‘hot’ or has too much radioactivity in it, then it’s got to go to a special facility,” he noted.

“There’s a little bit of an issue with that for the Marcellus cuttings, but the Utica cuttings are certainly not that hot,” or radioactive, Chadsey said. “So we don’t typically see that as a problem.”

“The common at-site assessment of radioactive material is just basically a worker with a Geiger counter” at a landfill, countered Christian Adams at Environment Ohio.

“The problem is that Geiger counters measure for gamma radiation,” with a quick on-the-spot assessment, Adams said. But radium that could be in shale waste emits alpha particles, and proper measurement “takes a full 21 days of laboratory assessment.”

Surface exposure would be unlikely after burial in a landfill. But advocates worry about water leaching from the sites.

“Will that fluid be radioactive?” Houston asked. “How do we know if we’re not testing?” Even then, wastewater facilities generally don’t test and treat for radioactivity.

Materials submitted on behalf of the Ohio Oil & Gas Association urged Ohio EPA to consider some or all of the historical uses for drill cuttings. Those include spreading on roads, plugging abandoned wells, and using them for landfill cover, clean fill material, construction materials, and even wetlands restoration.

The American Petroleum Institute—Ohio and other industry sources supported some of these ideas as well.

Among other things, industry sources argued that beneficial reuse would conserve limited landfill space. They also said the option would save hundreds of millions of dollars over the next decade.

CONSOL Energy supported the general idea of reuse, but did not want it to be mandatory. In particular, the company worried about possible legal exposure.

“[L]anguage is needed to assure liability release for beneficial use projects involving these materials if operators are to truly consider this as a viable option,” wrote Carrie Crompton, the company’s regulatory affairs director.

Ohio should follow the federal definition for TENORM and follow the examples of neighboring states such as Michigan, Pennsylvania and West Virginia, the joint statement urged. And any materials that might be reused should go through rigorous testing to assure safety, it said.

The “early stakeholder outreach” is the first step in agency rulemaking. “We do not have an estimated timeframe to offer at this time,” Christopher Abbruzzese at Ohio EPA advised last week.

Yet once the agency does move, the process could proceed swiftly—partly because tons of drill cuttings continue to come out of the earth.

“In an effort to make a climate that’s easy, that’s speedy, for moving the industry along, there’s a push to make the waste disposal be fairly easy and cheap.” Houston said.