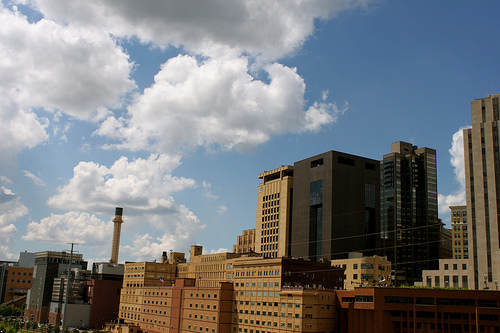 District Energy St. Paul was the only American project to be recognized in a recent report on the potential of district energy by the United Nations Environment Program.

The UN’s “District Energy In Cities: Unlocking the Full Potential of Energy Efficiency and Renewable Energy” cited the St. Paul organization’s work using biomass, thermal storage and solar arrays to produce 289 megawatts of heat annually while reducing CO2 emissions by 280,000 tons. The facility’s electric plant has a capacity of 33 MW.

The major source of fuel for the downtown St. Paul facility is 300,000 tons of municipal wood waste, the report said, which displaces 275,000 tons of coal annually.

District Energy’s CEO and president, Ken Smith, isn’t surprised by the UN’s citation. The utility was created 30 years ago as a model for district energy and has received visitors from around the world, he said.

“I spoke to the folks at the UN and what they’re hoping to do is identify leading systems that others can reach out to, learn from and be mentored by,” Smith said.

The global leaders in district energy  — which, like the St. Paul plant, often incorporate combined heat and power (CHP) —  tend to be in Europe, where they are a significant part of energy and climate strategy, Smith said. Although district energy mainly functions in larger cities it can work in towns with as few as 400 residents.

“It’s scalable to the needs of the community,” he said. “It’s an important infrastructure to achieving energy efficiency and reducing greenhouse gas emissions.”

Another growing desire on behalf of district energy developers is increase the resiliency of communities in preparation for potentially severe weather events, Smith said. On the East Coast “a lot of attention” is paid to integrated energy systems, microgrids and district energy in the wake of Hurricane Sandy, Smith said.

In the Midwest, the state of Minnesota is a leader in expanding district energy solutions, Smith said. This fall the Department of Commerce has been holding stakeholder meetings prior to putting together a legislative package to pave the way for more heat and power solutions.

Although district energy that heats buildings with biomass works well in northern-tier cities, urban areas such as Miami and Phoenix have also used the same approach, as has St. Paul, for cooling. Smith said district cooling has taken off in the Middle East, in particular, to help reduce electricity demand at peak hours.

In addition to providing energy and cooling, District Energy consults with other cities and communities nationally on potential projects through its Ever-Green Energy affiliate. Close to home it has conducted research on warming buildings in Minneapolis with heat from a nearby waste-to-energy plant.

It is working with the city’s Prospect Park neighborhood on an ambitious plan to create a sustainable community between Highway 280 and the University of Minnesota’s TCF Stadium. It’s also working to improve performance at a steam plant in Duluth.

In Vermont, District Energy is helping Montpelier expand a biomass heating plant from serving the state capitol to public and private buildings. In Burlington the company is assisting with a plan for a biomass-fired generation plant to capture waste heat to warm a campus, a hospital area and a downtown district.

Combined heat and power faces challenges, among them the need to tear up streets to install pipes, an expensive proposition, Smith said. Another issue is educational — it takes time for people to understand the benefits.

“You also really need leadership,” he said. “It’s impossible to make a project work without it.”