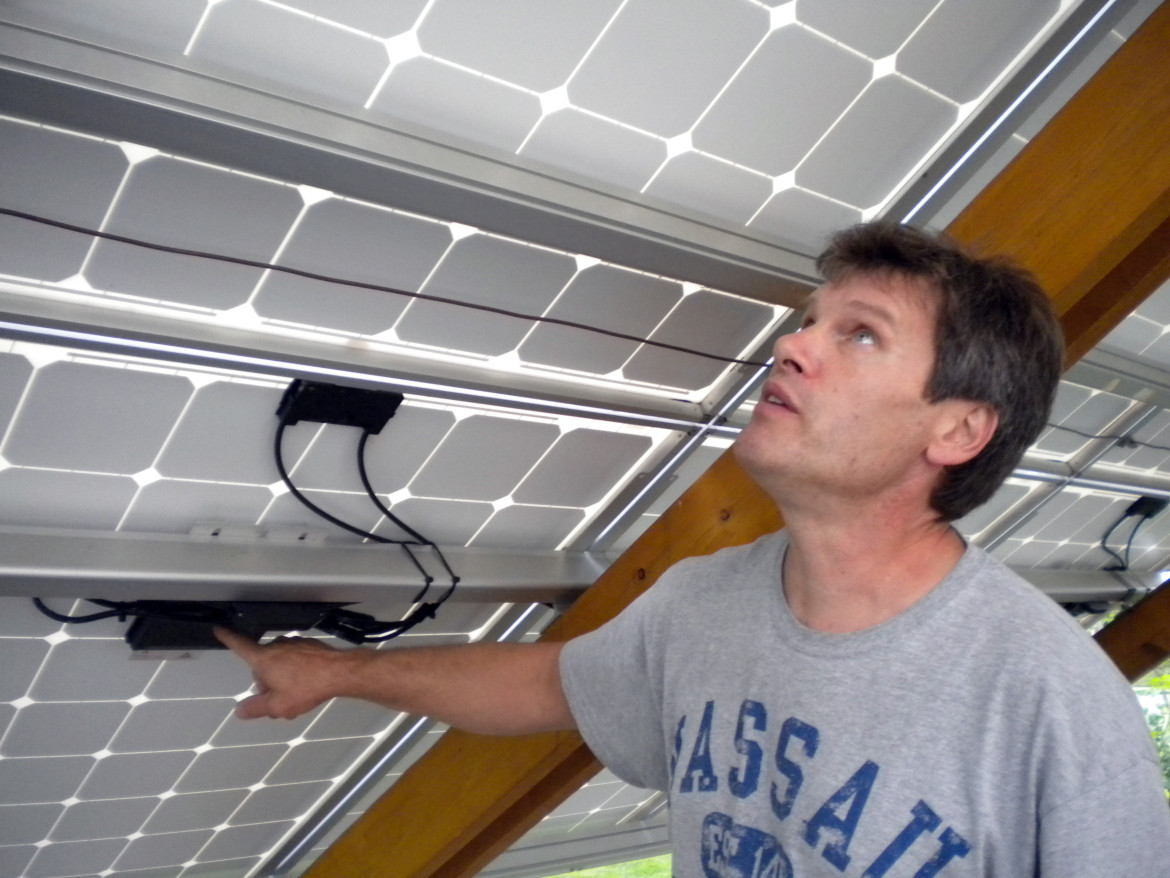 Last week’s 2014 Green Energy Ohio tour featured solar and other renewable energy and energy efficiency installations that are providing reliable energy and cost-savings, along with environmental benefits such as lower greenhouse gas emissions.

Yet while the physical climate of Ohio works well with the technologies, various participants criticized Ohio’s political climate and recent changes in the law.

Despite that, advocates still see multiple paths forward for clean energy in Ohio, if perhaps on a smaller scale.

Programs included nine free guided tours around the state, including a tour at The Ohio State University, a visit to one of Ohio’s largest wind farms, a bike tour of Cincinnati, and a city-wide tour of Oberlin. Members of the public could also visit dozens of homes, businesses and public buildings space on their own.

The once-a-year event aims to educate Ohioans about renewable energy and energy efficiency projects that work well in the state.

“It’s important for people who have heard about various innovations to get an actual touch-and-feel experience with this, to see how they can make the spaces they live and work in more sustainable and efficient,” said Greg Jones, an energy advocate for POWER (Providing Oberlin with Efficiency Responsibly).

Tour organizers also hope to get the attention of Ohio’s lawmakers.

“We have asked all of the participants on the tour to contact their local public officials and especially their state legislators.” said Bill Spratley, executive director for Green Energy Ohio.

“It’s going to be difficult to get them on the tour,” though, Spratley admitted.

Even aside from some legislators who have voted against renewable energy and energy efficiency, many lawmakers are out on the campaign trail, Spratley said.

Both organizers and site volunteers expressed concerns about recent actions by the Ohio legislature, such as Senate Bill 310 and House Bill 483.

The Timber Road II Wind Farm in Payne, Ohio, was one of last Saturday’s tour sites. Developed by EDP Renewables, the wind farm has a capacity of 99 megawatts (MW). Its electricity could power roughly 27,000 Ohio homes per year.

The law approximately tripled property line setbacks for new wind turbines. Projects that were already permitted but not yet built can proceed, but only if operators don’t seek any permit modifications.

The new setback requirement was a last-minute addition to the state’s mid-biennium budget bill. No hearings were held on the setback provision. No one from industry or the public offered testimony on it either.

Wind, solar, and other renewable energy projects will suffer even more under SB 310, which temporarily halts increases in the state’s renewable energy and energy efficiency standards. The law also dramatically scales back both sets of requirements while a study committee reviews them further.

The USDA’s Rural Energy for America program, or REAP, is also helping with grants in rural areas. “We are seeing more and more large solar arrays on barns,” Spratley said.

“The reality is despite all the things that have happened policywise, we see a very strong solar home market in Ohio,” said Spratley.

“Showing people it works is more critical than anything else we can do” for solar or other technologies, Spratley stressed. “The technology is driving a lot of this.”

Working projects on display during the tour last weekend showed off a range of innovations and designs. For example, the Niklas home in Rocky River, Ohio, has both off-grid and grid-connected solar arrays, plus solar-powered attic venting.

“The grid is the way to go,” said homeowner Tim Niklas, who works as a building contractor.

In his experience, much of the off-grid solar production is wasted during the summer. The bulky basement battery chest has limited capacity. But a bigger battery set-up would not function efficiently in the wintertime.

With net metering for the grid-connected panels, any extra electricity results in credits on the generation portion of Niklas’s electric bill.

“It’s kind of like a squirrel with nuts. You can use them all winter long,” Niklas said.

The American Legislative Exchange Council (ALEC) has opposed home solar energy production and encouraged surcharges on it. SB 310 co-sponsor Bill Seitz sits on the group’s board of directors.

Under an Ohio Supreme Court decision, however, those consumers already pay the full price for electricity distribution.

And FirstEnergy and other utilities want the court to limit net metering credits or rebates even more—despite a state statute that says customers are entitled to the full retail value for any extra electricity they provide to the grid.

However, Niklas maintains that the utilities are already getting extra value. Any extra electricity from systems like his goes out to the neighborhood with less transmission loss than that coming from utilities’ distant power plants.

“The more power we produce locally, the less we need to burn” coal and fossil fuels, Niklas noted.

‘It does work—even in Ohio’

Richard Ruscin’s remodeled residence in North Olmsted, Ohio, serves as the office for his business installing solar panels, vents and passive solar lighting. With net metering, the monthly electric bill is just $18, he says. Beyond that, Ruscin says homeowners generally recoup any investment when they sell their homes.

“It’s so important that the public gets familiar with what’s out there and how it can help them,” Ruscin said.

An ever wider array of technology was on display at the Adam Joseph Lewis Center at Oberlin College.

Solar panels on the roof and nearby carport have a fixed position. “Tracking doesn’t make a lot of sense for Ohio because our angle for the sun doesn’t change much,” explained tour director and biochemistry student Ren Wiscons.

Yet the center has one movable biometric solar panel on its front plaza. The panel runs a fountain in the building’s lobby, so visitors can see that solar energy works even on cloudy or cold winter days.

The center’s other features include a miniature wetland area, an organic garden, and a shade tree orchard fertilized with composted waste from toilets and other organic materials.

Participants on the Green Energy Ohio tour say they would urge state lawmakers to restore the renewable energy and energy efficiency standards.

“They should take this to heart and see that it does work—even in Ohio,” said Ruscin.

“We actively do something to promote the economy and the industry and the good health and well-being of the country,” Ruscin added. “It’s important.”

Curbing greenhouse gas emissions was also a huge concern for tour participants and visitors. A recent report from Environment Ohio showed that Ohio’s power plants emit as much carbon as the entire nation of Kuwait.

“I want to reduce my carbon footprint. We all do,” Niklas said. “If we don’t incentivize this stuff, we’re not going to have a planet to live on.”