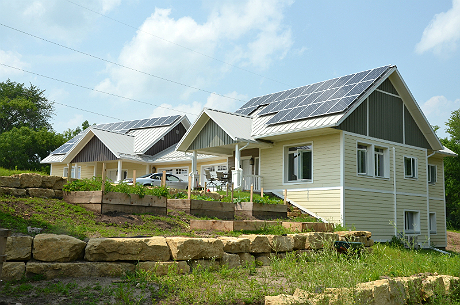 These Habitat homes in Wisconsin are equipped with solar panels and other energy -saving technology. (Photo courtesy St Croix Valley Habitat for Humanity)

If all goes according to plan, a nearly completed neighborhood of 18 Habitat for Humanity houses in northern Wisconsin will produce as much energy as it consumes.

And along with photovoltaic panels and a solar thermal system and walls that are 17 inches thick, very detailed monitoring of energy production and consumption at each of the houses will be used to try to keep the occupants on track to achieve “net zero” status.

When they applied to Habitat, potential purchasers of the house were notified that they would have to agree to intensive energy monitoring for three years.

“There was a little reluctance at first,” said Jim Cooper, project manager for the St. Croix Valley Habitat for Humanity. “People were not understanding and were thinking we were going to have cameras and microphones in their house. We assured them that we will maintain confidentiality and won’t share individual results or who’s doing what.

“Over the past six months, we’ve been working with homeowners and making suggestions to them. I’ve seen that resistance disappear. The fact that they can see the system, and what they’re looking at….I’d say more people are excited to be a part of it.”

Sustainability is a common feature of Habitat design and construction, with many of the homes built to meet Energy Star standards. Some houses get LEED certification as well. But net-zero performance is a higher standard yet, and one that several Habitat projects have aimed for. Habitat affiliates have built or are now working on net-zero houses in Iowa City, Minneapolis and Columbia, Missouri, to name a few.

But where scale is concerned, “We’re kind of unique,” Cooper said. “U.S. Habitat has been watching us and talking to us. And we’ve had other Habitat (affiliates) come see us.”

Cooper will be gathering data on energy produced by the solar panels and the solar thermal systems, as well as energy consumed — by the boilers, heat pumps, water heaters, and appliances.

“It’s one, to look at how people use their homes to see how much variation there is from one to the next and where the variation comes from, and to deal with it with education,” Cooper said. “And to test various systems and to find the most cost-effective ways to get energy consumption to the levels we’re trying to achieve.”

Energy is anything but simple at Eco Village. All 18 houses will have solar panels, and several will have solar thermal systems as well. The homes are heated by a combination in-floor radiant heat and high-efficiency heat pumps that also provide cooling.

Because he couldn’t find a control system to operate both the heat pumps and the in-floor heating system, Cooper said the systems run on separate controls. And that makes it all too easy to run cooling and heating simultaneously.

That further underscores the importance of education, he said.

“Someone could set the floor at 75 degrees, and if they haven’t paid attention, and left the [heat pumps] on auto, they could have the heat and the air conditioning on at the same time. We monitor the houses so we can catch it and tell people. It’s something you have to watch.”

Cooper hopes the data will also allow Habitat to better understand how the systems work. For example, he said, he’s trying to determine the most efficient way to heat water using sunlight. Some of the houses have solar thermal systems that heat water directly on the roof. Others have extra PV panels instead of a solar thermal system. With data from both systems, he hopes to determine which is the more efficient technology.

Actually achieving a net-zero household is a significant challenge.

Iowa Valley Habitat for Humanity finished a house in the summer of 2013 with the aim of operating it on a net-zero basis. Over a recent 12-month period, the home used about 1,800 kilowatt hours for both heating and cooling. Based on six months of performance, output from the building’s solar panels are estimated at about 1,400 kilowatt hours for the same period.

“Not net zero, but not too shabby,” remarked Mark Patton, the affiliate’s executive director.

In addition to solar panels and structurally insulated paneling in the walls and ceiling and beneath the concrete slab, the house has an energy recovery system that is estimated to extract about 75 percent of the heat from air exhausted from the furnace and water heater. It didn’t generate the savings predicted, according to Patton, because the family in the house didn’t understand how to operate the system.

A Habitat chapter in Michigan set out to construct a net-zero house, but due to design changes, the house didn’t quite attain that level of performance.

Net zero is the goal behind a 10-house development that has just gotten underway in Grand Traverse, Michigan. The homes all will have solar panels and lots of insulation. The plan is to finish them by sometime in 2016.

In January, a family moved into what Habitat hopes will prove to be a net zero house in Minneapolis. Because the solar system’s meter didn’t start working until April, data on energy production is too limited to draw any real conclusions, said Chad Dipman, land acquisition project manager for the Twin Cities Habitat for Humanity. However, he pointed out, the house did score a 4 from the Home Energy Rating System, meaning that it’s more efficient than 96 percent of typical houses built today.

And back in the St. Croix Valley, it’s not yet clear whether the 18-houses of Eco Village will live up to their net-zero billing. Since mid-April, the 10 occupied houses have generated “slightly more” energy than they’ve consumed, according to Cooper.

And at this point, he said, his homeowners “are very happy. They’ve been getting credits on their utility bills for about six months. We tell them, “Don’t get too excited; Winter is coming up.’ “