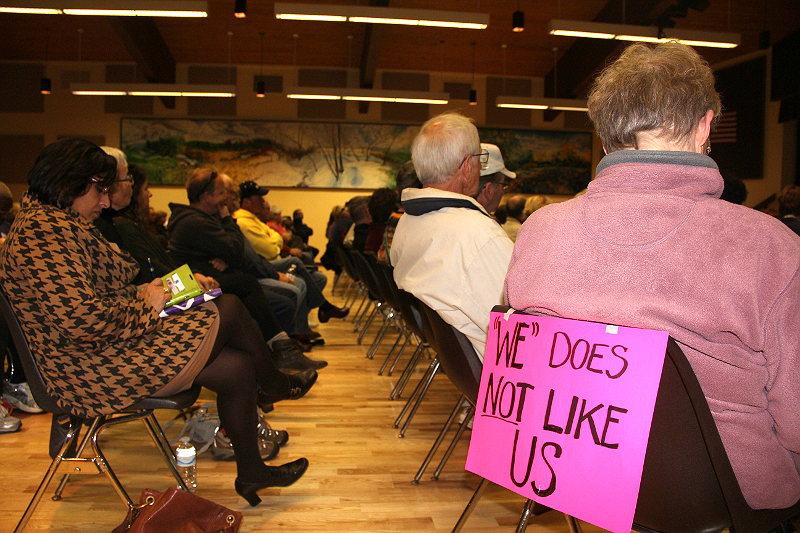 Opponents of a proposed We Energies rate plan largely outnumbered proponents at a Milwaukee hearing Wednesday. (Photo by Kari Lydersen)

MILWAUKEE – More than 200 people packed a public hearing on We Energies’ proposed rate restructuring in Milwaukee on Wednesday afternoon. And that was before the brass band played in the parking lot and an evening hearing that brought a new crowd.

“Are they having a party here? Is the news coming to cover the pool players?” asked one local walking up to the senior center where the hearing was held.

The attention to the normally obscure rate-making procedure (docket number 5-UR-107) is because We Energies’ proposal is seen as an attack on renewable energy that could nearly halt rooftop solar development in the area and chill distributed generation in general, including small wind projects and farm biogas digesters.

If the Public Service Commission approves We Energies’ plan, it would mean the fixed charges all consumers pay each month would go up by 75 percent while rates for energy consumption would go down, greatly reducing the incentive for installing rooftop solar or other distributed generation.

We Energies would also institute an additional charge specifically on distributed generation; it would greatly reduce the net metering rates paid to people sending power back to the grid; and it would ban third-party ownership of distributed generation, a mechanism that is crucial to financing many solar installations.

The great majority of residents who testified at the hearing opposed We Energies’ proposal, decrying it as a de facto public subsidy of fossil fuels, an assault on renewable energy and a way to boost the profits of shareholders and pay of executives.

Words used to describe the plan included “horrendous,” “misleading,” “short-sighted,” “class warfare” and even “sinful.” A hand-lettered fluorescent pink sign taped to one woman’s chair said, “WE does not like us.”

Some also spoke in support of the proposal, mainly on behalf of coalitions or groups including the Milwaukee Urban League, the Milwaukee Building-Construction Trades Council, Wisconsin Utility Investors, Inc. and the Consumer Energy Alliance.

Both sides in the debate have argued that their opponent’s position will hurt low-income customers and minorities.

We Energies representatives have argued that since low-income people are less likely to be able to install renewable energy, they are disproportionately “subsidizing” people who are generating their own energy – since, the utility argues, those customers aren’t paying their “fair share” to maintain grid infrastructure.

Meanwhile, opponents of We Energies’ plan point out that the rate restructuring would mean rate increases for low energy users, including low-income households, compared to high energy users such as large homes and big businesses.

John Howat, a senior policy analyst at the National Consumer Law Center, submitted a brief charging that We Energies’ proposal would cause “disproportionate harm” to low-income families and people of color. His analysis showed the change would mean a 7.1 percent rate increase for low-volume energy users, and just a 0.6 percent increase for high-volume users.

Conversely, several supporters of We Energies argued that the rate change would protect elderly people from “subsidizing” those with solar installations.

“My mother is 83 years old. Right now, she subsidizes everyone who has a solar panel on their roof,” said building trades council president Dan Bukiewicz, who also touted the jobs created by the electricity industry and read a statement from the Wisconsin AFL-CIO supporting We Energies’ position.

Robert Seitz, executive director of Wisconsin Utility Investors, Inc., also invoked his mother in testifying in support of We Energies’ proposal. He said the current situation favors wealthy people who can afford a house with a sturdy roof and a sunny location suitable for solar, while penalizing people like his 85-year-old mother who are on a fixed income.

“The insidious part of this big-money campaign from the rooftop solar industry is that they attempt to motivate those least able to pay their electric bills to fight for the most regressive subsidy of the wealthy I am aware of,” he said.

At the heart of the matter is the concept that We Energies is a public monopoly whose market is guaranteed by government policy but generates profits for private interests. And in the view of many critics, it is trying to mandate customers buy a minimum amount of its product.

“Fundamentally, a monopoly has no ‘right’ to insist on a certain amount of consumption,” says a brief filed by the Environmental Law & Policy Center (ELPC).

Mark Kohel, an electrician, was among locals who lashed out at the idea of a public monopoly profiting from providing essential services to residents.

“If We Energies wants to continue doing business like past monopolies like Standard Oil, U.S. Steel and AT&T, we should consider using the Sherman Antitrust Act to give ourselves some relief,” he testified.

“Wasn’t the Public Service Commission originally formed to help and work for the people? But it seems like we get put on the back burner and the Public Service Commission is working for the utility companies,” added Tom Brandstetter, who invested $24,000 of his own money to install solar panels on a church in a setup he says would be unlikely under the new rate structure. “We need competition for this monopoly.”

“The executive compensation at this so-called regulated monopoly is outrageous,” said Frank VandeCorput, 78, a retired bank and savings and loan official. “We Energies experts expect Wisconsinites to subsidize their forays into other states.”

Some speakers decried We Energies for proposing policies that would impede renewable energy development while forcing customers to “subsidize” We Energies’ coal plants, including the nearby Oak Creek Power Plant. We Energies is undertaking an expansion of Oak Creek; many residents and renewable energy advocates call the problem-plagued plant “unnecessary” and say they would rather their rate payments go toward renewable and distributed generation.

“They are directly responsible for children in Milwaukee having asthma,” said Mark Gill, resident of the Bay View neighborhood near Lake Michigan. “You cannot catch a fish in Wisconsin that doesn’t have a mercury advisory on it.”

We Energies’ proposal would raise fixed charges from $9.13 to $16 per month. The utility describes it as a first step in moving toward a rate design where all or almost all of their fixed costs are recouped by fixed charges. The ELPC brief filed by attorney Bradley Klein says this goal would eventually result in an $89 per month fixed charge for small customers.

Several residents at the hearing compared the structure to buying gasoline and paying a hefty charge just to remove the nozzle from the pump.

Under We Energies’ proposal, customers who generate their own energy will see a 35 to 47 percent reduction in the returns they would otherwise experience, according to an analysis by RENEW Wisconsin program and policy director Michael Vickerman.

This “capacity demand charge” is basically intended to make sure the utility is able to deliver electricity to these customers should their own installations fail and their need from the grid suddenly spike. But experts have argued that the likelihood of this happening on a mass scale is low; meanwhile, there is no such charge proposed for customers whose usage may spike suddenly for other reasons.

We Energies also proposes reducing the amount it pays net metering customers for the electricity they send back to the grid. The utility argues that customers should be paid the amount of the utility’s avoided costs, a much lower amount than they are currently paid.

But experts argue that We Energies is not doing these calculations fairly, and that they are treating distributed generators as a collection of small unrelated entities providing marginal influxes of electricity. Instead, they say, the utility should view all distributed generation in the service territory as one body which over time can significantly reduce need for new generation and wear and tear on the grid, theoretically saving We Energies money.

Vickerman has also pointed out a “double standard” in how We Energies views solar power that it intends to produce versus customers’ distributed solar installations, as described in the ELPC brief. The utility is planning to build a 7.5 MW solar PV array and is seeking to recover the costs through rates at about 11.47 cents/kWh, by Vickerman’s calculation. Yet under the new rate structure it would credit people with their own solar arrays just 4.24 cents/kWh.

The ELPC brief charges that We Energies’ proposal violates the state’s energy policy provisions on energy conservation, increasing energy efficiency and the stated goal that “to the extent it is cost effective and technically feasible, all new installed capacity for electric generation in the state be based on renewable energy resources.”

State Sen. Tim Carpenter, a Milwaukee Democrat, testified that We Energies’ proposal would undercut efforts at conservation. He invoked his father, who grew up during the Depression and maintained thrifty ways, keeping his home so chilly in winter that he’d pile on sweaters and the pets would climb into his bed at night to keep warm.

“You’re doing conservation to try to save money, to save the environment, and you’re going to be penalized for that because of the increase in the fixed rate,” Carpenter said.

Critics of We Energies’ proposal also say the utility has not shown what its actual costs are to justify the new fixed charges.

The ELPC brief cites expert witnesses who have testified that We Energies did not study the exact costs that distributed generation means for the utility infrastructure, including any impacts from the variability of rooftop solar generation. Experts say that before demanding changes, We Energies needs to quantify these costs and also the benefits to the system provided by customer generation.

In Utah, the company PacifiCorp recently requested a similar change in rate structure. But the Utah Public Service Commission rejected the proposal, even though – according to the ELPC – the utility had provided more data than We Energies to try to make its case.

Klein points to expert testimony by Dr. Charles Cicchetti, a former chair of the Wisconsin Public Service Commission, who has described the proposal as shifting risk to customers while protecting shareholders.

“At no point has the Company justified why it needs to increased fixed charges by 75 percent for all of its customers in order to ‘protect’ them from the 0.04 percent of its customers that have installed Distributed Generation,” the ELPC’s brief says.

The We Energies hearing is one of three ongoing rate cases in Wisconsin that are seen as attacks on distributed and renewable generation. Today (October 9) the Public Service Commission is holding a public hearing in Madison regarding Madison Gas & Electric’s proposed restructuring. Clean power advocates say the Public Service Commission’s decision could represent a turning point with long-lasting implications for the state’s energy and business future.

“To me the tone has changed significantly in the past few years,” said Burke O’Neal, lead engineer of Full Spectrum Solar, speaking about the various rate cases. “The current Public Service Commission is much less friendly to distributed energy and seems to be rubberstamping a lot more of what utilities are proposing. I would question how interested they are in serving the public.”

RENEW Wisconsin and the ELPC are members of RE-AMP, which publishes Midwest Energy News.